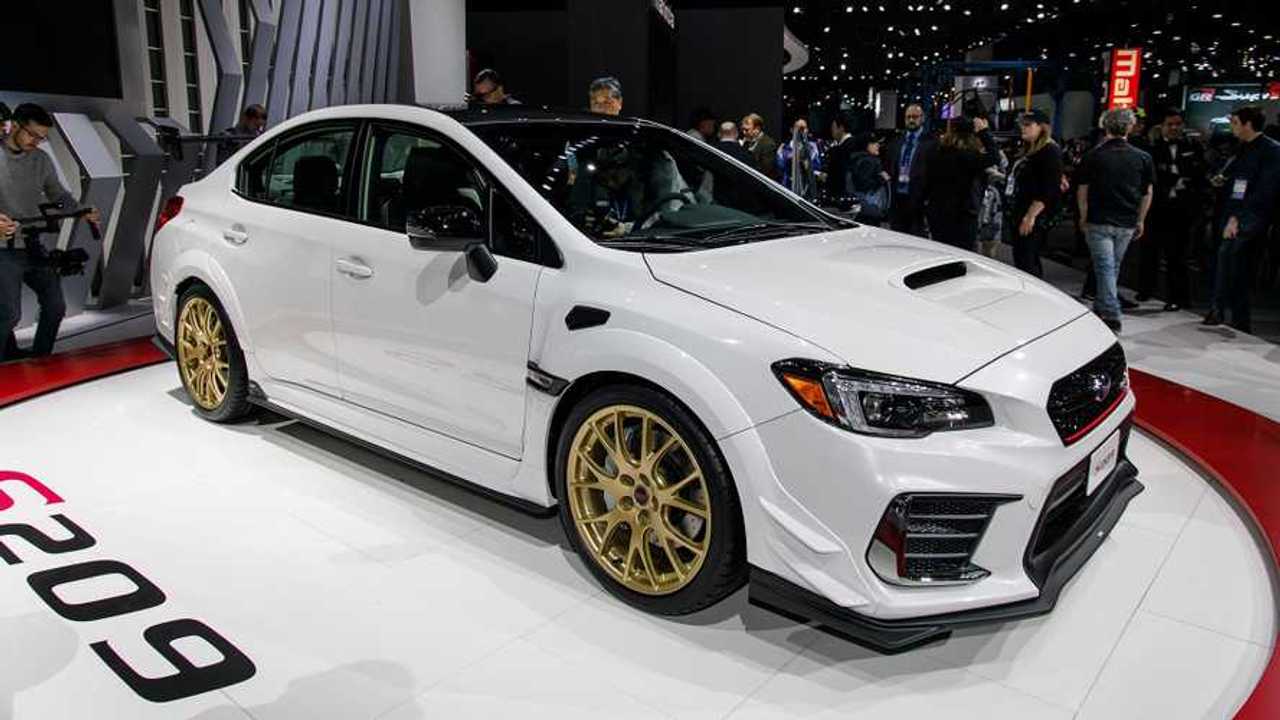 If you're hoping to be one of the 209 Americans to get the 2019 Subaru WRX STi S209 then prepare to pay $64,880 (including the $885 destination fee) for the privilege of driving the hottest WRX to ever arrive in the United States. It's quite a price for the limited-run edition.

The S209 features a highly tuned version of Subaru's EJ25 2.5-liter four-cylinder that now produces 341 horsepower (254 kilowatts) and 330 pound-feet (447 Newton-meters) of torque. This is 31 hp (23 kW) and 40 lb-ft (54 Nm) more than the standard WRX STI. To make this happen, there's a larger turbocharger running at 18.9 psi (1.303 bar). A revised intake and larger fuel injectors also help boost the power output. A six-speed manual is the only gearbox option.

For nearly $65,000, buyers get the first Subaru S model to arrive in the United States. These vehicles get specific tuning at STI's workshop in Kiryu, Japan. The team working on them is so small that the crew can only complete the work on two or three vehicles each day. Because of the degree of the work, the company homologates the S209 as an STI in the United States, rather than a Subaru.

The S209 will arrive at Subaru dealers in America before the end of the year. Despite the steep price, the small production run could mean that they don't sit in showrooms very long. Buyers have a choice between WR Blue Pearl exterior paint and matte gray wheels or a Crystal White Pearl body and matte gold finish for the wheels.

As an S-line product, the 2019 STI S209 encompasses upgrades in power, handling, aerodynamics and driver engagement, and is priced at $63,995, plus $885 Destination and Delivery charge.

Underneath the S209’s broader body are specially developed Bilstein® dampers, stiffened coil springs, a 20mm rear stabilizer bar and pillow-type bushings for the front/rear lateral links. The S209 incorporates reinforcements to the front crossmember and rear subframes and a flexible front-strut tower bar and flexible front/rear draw stiffeners. Other Nürburgring racecar tech that trickles down to the S209: front, rear and side under spoilers; front bumper canards; and carbon-fiber roof panel and rear wing.

A reworked version of the legendary EJ25 2.5-liter turbocharged BOXER engine propels the S209. Featuring an STI turbocharger manufactured by HKS®, the EJ25 serves up 341 horsepower at 6,400 rpm, thanks in part to a larger turbine and compressor (up 6 and 8 percent, respectively, compared to WRX STI) as well as maximum boost pressure that has been increased to 18.9 psi (16.2 psi for WRX STI). The enhanced BOXER engine also receives a notable bump in midrange torque – 330 lb.-ft. at 3,600 rpm – delivering higher corner exit speeds when driving on track.

The S209 receives multiple tweaks to elevate it from other STI sedans. An STI badge replaces the traditional Subaru star cluster on the center of the D-shape steering wheel, which is wrapped in Ultrasuede® with silver stitching, a treatment that carries over to the lid of the center console storage box. An S209 serial number badge resides on the center console and in the engine compartment.  Inside, an S209 badge adorns the passenger-side dash and the S209 logo is embossed on the headrests as well as STI logo embroidered on the seat backs of the Recaro® front bucket seats, which feature new silver-hued inserts. Outside, special S209 badges are affixed to the front grille and fenders as well as the rear decklid.

Only 209 of the STI S209 will be built, earmarked exclusively for the U.S. Available exterior color/BBS wheel combinations will be WR Blue Pearl/matte gray wheels and Crystal White Pearl/matte gold wheels.