1977 Citroën Camper Van For Sale Is The Cutest Little Thing 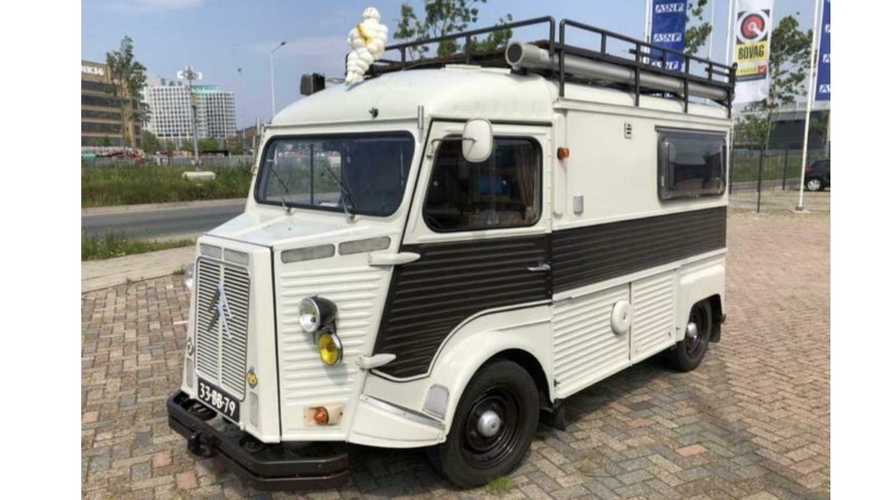 Anything can be turned into a camper if you set your mind to it.

Manufactured for more than three decades, the Citroën Type H is without a shadow of a doubt one of the most distinctive vans to see the light of day. Its unconventional design is still an attention-grabber some nearly 40 years since the company with the double chevron logo ended production to make room for the C25. If you’re longing for the good ol’ days, there are body kit conversions available in Europe to turn the latest-generation Jumper into a Type H lookalike.

Seeing one up for grabs in the United States is somewhat of a rarity, let alone a camper conversion like this HY 1600 available in Santa Monica, California. On sale on Craigslist for a rather pricey $29,000, the van-turned-camper has been imported from The Netherlands where it was converted by a yacht builder, hence the nautical theme for the interior cabin.

Before we hop inside, it’s worth mentioning the camper has a Michelin mascot harkening back to the old days when the popular Citroën van was used by the French tire manufacturer for advertising and delivery purposes. There’s also a nifty roof rack with an awning mounted to it, while sunscreens can be attached on both sides of the vehicle in case you want to camp out.

The HY 1600 camper van has covered about 138,000 kilometers (85,749 miles) and it’s in “exceptional condition” according to the seller. The yacht-like cabin with mahogany furniture contains a barometer/clock finished in brass as you’d find inside a ship, and there are lots of amenities you would want from a camper: sink, electric faucet, water tank, gas stove, separate battery, and a table that can be folded to serve as a double bed.

Here Are Other Unconventional Campers:

According to the seller, the braking system and gearbox have recently been overhauled and the engine is in great shape. Various spare parts come bundled with the van, along with full documentation about its 42-year history and how it was imported to the U.S. The ad mentions it’s suitable for a food truck conversion, but we’d rather keep it as is.