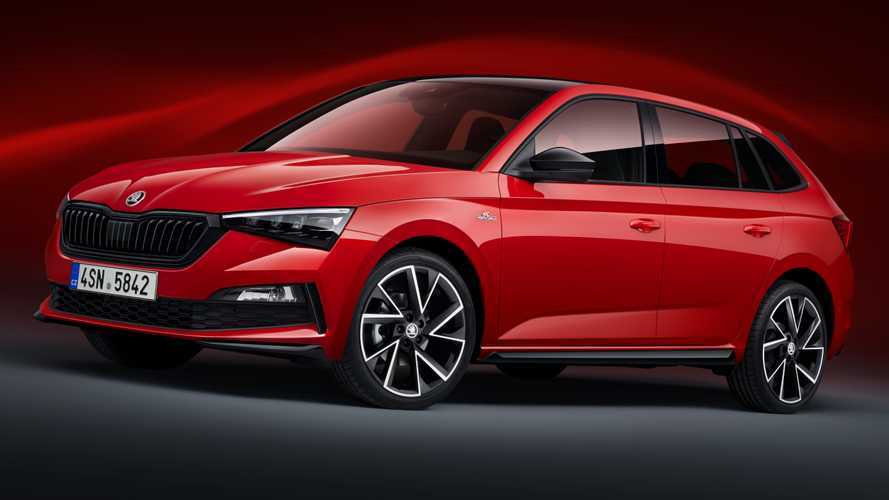 The posh hatchback boasts styling tweaks inside and out.

Skoda hasn’t said anything about giving the Scala the full-on Laurin & Klement luxury treatment – and we highly doubt it will – so this new Monte Carlo trim will serve as the version equipped with all the bells and whistles. Debuting later this month at the Frankfurt Motor Show, the five-door compact hatchback follows in the footsteps of the Fabia Monte Carlo and Rapid Monte Carlo by featuring an assortment of visual revisions.

On the outside, you can tell it’s a fancy Scala by the black styling accents noticeable on the full-LED headlights and on parts of the redesigned front apron. It’s a similar story at the back where the “SKODA” lettering is finished in black, while the 17-inch or optional 18-inch alloy wheels are exclusive to this version. Rounding off the changes are the side mirrors caps, which as you might have guessed, are entirely black.

Being the flagship trim, the Scala Monte Carlo comes loaded with standard features. Goodies include everything from a panoramic sunroof to full-LED taillights, while the black roof spoiler, tinted side windows, and the extended glass on the tailgate also denote it’s the most expensive version of the hatchback available.

Exclusive to the Czech Volkswagen Golf in Monte Carlo guise are the height-adjustable sports seats with built-in headrests and model-reserved upholstery. Skoda went to the trouble of creating new decorative trims and graphics for the instrument cluster, as well as combining red accents with a black headliner. Other goodies added to the crown jewel of the range include Scala-branded door sills, special floor mats, a chrome treatment for the air vents, and LED ambient lighting in red for the center console, door pockets and handles, and also for the footwells.

Skoda's Rapid Replacement In The News:

Following its premiere at the Frankfurt Motor Show, the Skoda Scala Monte Carlo will go on sale in Europe in the fourth quarter of 2019.

The name of Skoda’s upscale trim level stems from to the Principality of Monaco and the famous Monte Carlo Rally first held way back in 1911, making it the longest-running WRC event. It’s where the VW Group brand has enjoyed (some) success over the decades, with the Popular Sport finishing second in its category in 1936 while the 130 RS took first and second in its class in 1977. The more recent Fabia supermini in rally car spec has also been “extremely successful” at the event, according to Skoda.

Mladá Boleslav, 2 September 2019 – ŠKODA is expanding its new SCALA compact model series by introducing the popular MONTE CARLO trim level. It pays homage to the car maker’s successful rally history and uses distinctive black elements and black ŠKODA lettering at the rear to lend the dynamic SCALA an even sportier visual presence. The premiere of the ŠKODA SCALA MONTE CARLO, which will be available with the model series’ complete range of engines, is set to take place at the Frankfurt Motor Show in September, with the first units delivered to customers from the fourth quarter of 2019.

ŠKODA compact models’ sporty lifestyle variants traditionally bear the MONTE CARLO designation. The latter refers to the urban district of the Principality of Monaco, which is synonymous with glitter and glamour – as well as over one hundred years of motor racing history. First held in 1911, the Monte Carlo Rally has the longest tradition of all the events forming part of today’s World Rally Championship series, and ŠKODA achieved some of its greatest motor racing successes there. In 1936, for example, the ŠKODA POPULAR SPORT came second in its category, while in 1977, the ŠKODA 130 RS took first and second place in its class. The rally versions of the ŠKODA FABIA have also been extremely successful at the event. The ŠKODA SCALA MONTE CARLO references this motor racing tradition and evokes legendary vehicles and triumphs.

Oliver Stefani, Head of ŠKODA Design, underscores, “With the new MONTE CARLO version, we are putting even greater emphasis on the ŠKODA SCALA’s sporty and dynamic character. The black MONTE CARLO features, large alloy wheels and the storied name establish a link with our successful rally vehicles and are even more specifically designed for a younger target audience which appreciates sportiness and an emotive, lifestyle-focused design.”

Sporty design and eye-catching black elements
Numerous black elements lend the dynamic ŠKODA SCALA MONTE CARLO an even sportier presence. The frame of the distinctive ŠKODA grille flanked by full-LED headlights is finished in glossy black, and parts of the redesigned front apron also come in black. The ŠKODA lettering taking the place of the central ŠKODA logo on the tailgate – the SCALA was the first European ŠKODA production model to introduce this feature – is another element which comes in black in the SCALA MONTE CARLO. The model’s side view is defined by black 17-inch alloy wheels (18-inch optional) with a special MONTE CARLO design, as well as black wing mirror caps and side sills.

Standard equipment for the ŠKODA SCALA MONTE CARLO trim level, which is available with any engine from the model series roster, includes SunSet tinted side windows as well as a panoramic roof and extended rear window complete with a black roof spoiler. A black rear diffuser and black model designations as well as full-LED tail lights round off the sporty appearance of the new SCALA range-topper, which can also be identified by a special badge.

Sports seats and leather applications for a sophisticated interior
The interior design of the ŠKODA SCALA MONTE CARLO radiates sporting appeal. The height-adjustable sports seats come with integrated headrests and special MONTE CARLO upholstery, and the decorative trims and instrument cluster likewise feature a standalone design. The multifunction sports steering wheel is covered in perforated leather bearing the same red decorative seams as the leather finish for the gear selector and handbrake lever. Another red accent comes in the shape of the LED ambient lighting illuminating the centre console, footwells and door storage compartments and handles. The air vents in the instrument panel impress with a chrome look, and the trim level also includes LED reading lights. Pedal trim with an aluminium design, special floor mats, SCALA lettering on the door sills and a black roof lining round off the sporty interior ambience.

ŠKODA will be introducing the new SCALA MONTE CARLO to the industry and general public at the 2019 Frankfurt Motor Show, from 10 to 22 September, in Hall 3.0, Stand A11. Market launch will start in the fourth quarter of 2019.