2021 Audi Q5 Facelift Spied Inside And Out [UPDATE] 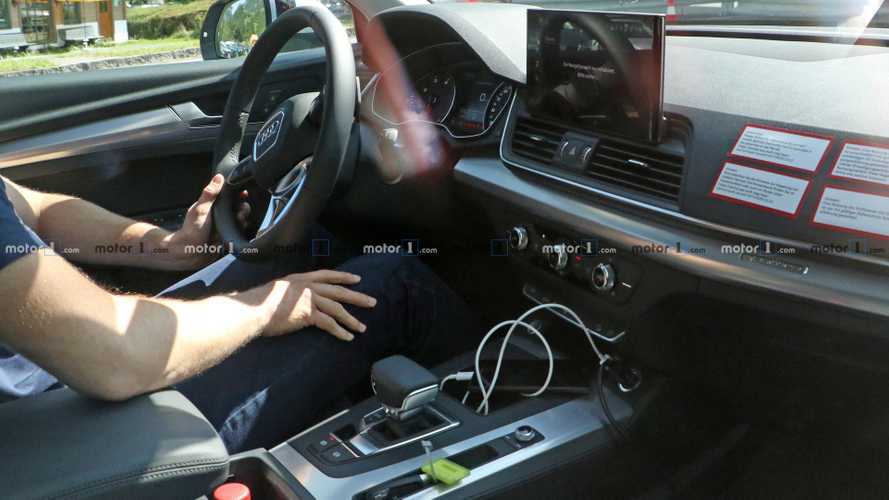 There isn't much camo to speak of, but then again, it's a minor update.

[UPDATE, September 2] 11 new spy shots have been added to the gallery, below.

Audi is in the midst of revamping pretty much its entire portfolio of vehicles. Between all-new models and facelifts, the automaker is on track to have a young lineup in the next few years, not to mention a gaggle of SUVs. The current Q5 is on the update list despite having recently debuted for the 2018 model year, though as the camouflaged front and rear areas suggest, the refresh will be a minor one.

Specifically, the Q5 will get Audi’s updated grille that stretches a bit wider. The small redesign makes the grille look more rectangular, but it’s still a massive opening for the front of the SUV. New headlights and a restyled fascia are part of the facelift, and the fenders could be new as well. A similar treatment takes place at the back with new taillights, and though our eyes don’t see any differences in the rear fascia, reshaped exhaust outlets are possible. The rear quarter panels might also have a bit more flair.

The greenhouse isn’t likely to change from the current Q5, though we’ve heard the dash-mounted touchscreen could grow to 10.1 inches. Larger displays are certainly a trend, and by keeping the screen hovering above the dash, it’s easy to make such changes without redesigning the whole enchilada. Beyond that, color and/or trim updates are always possible, not to mention software updates to the MMI infotainment system. Existing engine and powertrain configurations should carry over as well.

Our Take On The Current Q5:

The mid-sized SUV segment is arguably the most competitive market in the entire automotive realm, hence why model updates from most automakers come at us on nearly a daily basis. The current Q5 isn’t old by any standards with just two model years under its belt, but we expect this facelifted model to debut early-to-mid 2020 as a 2021 model.