The Datsun (Nissan) 240Z is a classic 70s sports car that can still have a modern appearance with just a few styling tweaks, and this tuned example looks fantastic. Under the hood, the original L-series inline-six engine is gone in favor of a Toyota 2JZ inline-six. This powerplant is famous for its tunability, particularly in the fourth-generation Supra, and the mill in this car makes an estimated 600 horsepower (447 kilowatts). That's quite a lot of power for a vehicle that reportedly weighs less than 2,300 pounds (1,044 kilograms).

The rest of the powertrain consists of a Toyota R154 five-speed manual gearbox that sends the power to the rear wheels through a custom driveshaft to a limited-slip differential. The 240Z rides low on a set of D2 coilovers, and massive brakes slow down the powerful machine.

The Z Is An Amazing Platform For Tuning: 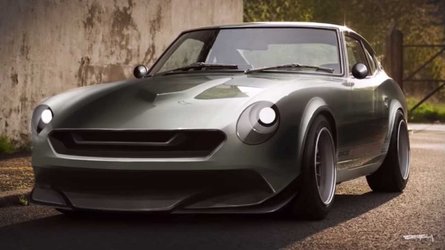 For The Love Of The Z: Watch Datsun 240Z Get Modernized Design 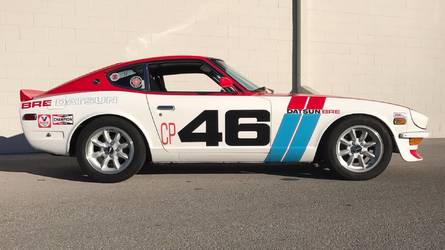 This 240Z wears a revised front end with a big grille. Unfortunately, the shiny metal bars don't really match the rest of the car's sleek aesthetic. The fender-mounted mirrors are a vintage touch, and a big spoiler adds a visual flourish to the rear. The overall aesthetic is aggressive without taking things too far.

Fender flares with exposed fasteners cover a set of custom-made CCW Classic 5 forged 16-inch wheels with black centers and polished rims. They measure 10.5 inches wide in front and 11 inches in the rear. Toyo Proxes tires with bright yellow logos stretch over them, which adds some color to the mostly black body.

Unfortunately, these photos don't provide a good look into the cabin. CCW Wheels' release about the car indicates that there are reupholstered seats with racing harnesses. The driver grips a Sparco steering wheel.

A Datsun 240Z with a Supra heart, performance upgrades and one set of wide Classic 5 wheels and Toyo tires
Talk about history! This 1972 Datsun 240Z is definitely a vehicle that gets one petrolhead’s heart pumping. Why? For the simple fact that this is one of the most complete builds we’ve seen to date. No stone was left unturned! Everything from the powertrain and exterior, all the way to small interior bits & pieces has been redone, making this 240Z Fairlady a head-turning piece of oldschool automotive class. Furthermore, add those ultra-cool hood-mounted mirrors that we all love (but are a true hazard to health to anyone that encounters them in a crash) and your daily dose of vintage Japanese motoring is complete. But we digress.

The Datsun 240Z belongs to the Nissan S30 family (sold in Japan as the Nissan Fairlady Z and in other markets as the Datsun 240Z, then later as the 260Z and 280Z). The vehicle is the first-generation of the Z GT two-seat coupes produced by the Japanese car manufacturer from 1969 to 1978. The car is one of the most successful sports car lines ever produced, as it featured the trend-setting design by a team led by Yoshihiko Matsuo, the head of Nissan’s Sports Car Styling Studio, all alongside impressive handling and performance figures.

While today’s sports cars all come with modern suspension and braking systems, back in the 1960s and 1970s, the likes of four-wheel independent suspension consisting of MacPherson struts in front and Chapman struts in back, alongside front disc brakes and rear drums were rare. However, these impressive modern additions to the Datsun 240Z made it one of the hottest performance machines of its era. And thanks to some detail-oriented builds, we’re able to see how a modern 240Z can look like.

For this build, one of the most impressive and important additions is the 2JZ engine swap. While some will call this sacrilege (to put a Toyota engine into a Nissan), the added power from one of the world’s most famous engines certainly makes this Datsun 240Z a formidable track weapon. While we still have to talk to the owner to find out the exact horsepower number, even in its stock form, this engine delivering at least 230 horsepower and 220 lb-ft of torque. However, our estimate is that this thing churns out at least 600 horsepower. And that, for a vehicle that weighs less than 2,300 lbs (1,044 kg) relates to an ass-kicking power to weight ratio. Transmission wise, the owner added an R154 transmission system and an R200 differential, allowing for some smooth & quick gear shifts and linear power delivery. For those that know their way around JDM cars, the R154 is a five-speed transmission found in the cars like the MKIII Supra Turbo, alongside the likes of the Toyota Crown, Toyota Chaser Tourer V, Toyota Mark II Tourer V, Toyota Cresta Tourer V and Toyota Soarer (turbo) up to 2004.  All things considered, a sturdy transmission system that will work with the 2JZ engine perfectly. And yes, it’s a manual.

The vehicle features a new ATL fuel racing gas tank, new fuel lines and finally, an Infinity ECU tune – tying it all in together.

The build continues with custom axels made by White Performance, a custom drive shaft by Freeden Engineering, a set of D2 coilovers and a stage 4 upgrade big brake kit with brand new brake lines. The latter comes with brake discs in the front and rear, a nice upgrade over the stock Datsun 240Z system. In turn, this means that the owner put a lot of thought into the handling and safety aspect of this build.

In the interior, you’ll find the reupholstered seats and a Technotoytuning T3 harness bar, a Sparco steering wheel and some nifty finishing touches.

For the final accentuating touch for this build, a set of custom-made CCW Classic 5 forged wheels are added. Perfectly matched to this Datsun 240Z, we’ve machined these wheels in sizes of 16×10.5 in the front and 16×11 in the rear. The wheels feature a Gloss Black finish for the centers and Polished Aluminum for the lips. The wheels are wrapped in sticky Toyo Proxes tires, stretched to the brink and looking really good with the bright yellow branded lettering. The wide wheel arches of this build required a really wide custom setup, which we’ve executed perfectly. And to be frank, the end result is quite impressive altogether.

You can grab a detailed view of this Datsun 240Z build in the media gallery right below. If you want to order a similar setup for your aftermarket build, please don’t hesitate to contact us right away. Our sales team will help you choose the right sizes, fitment and finishes for your brand new set of custom-made CCW forged wheels.