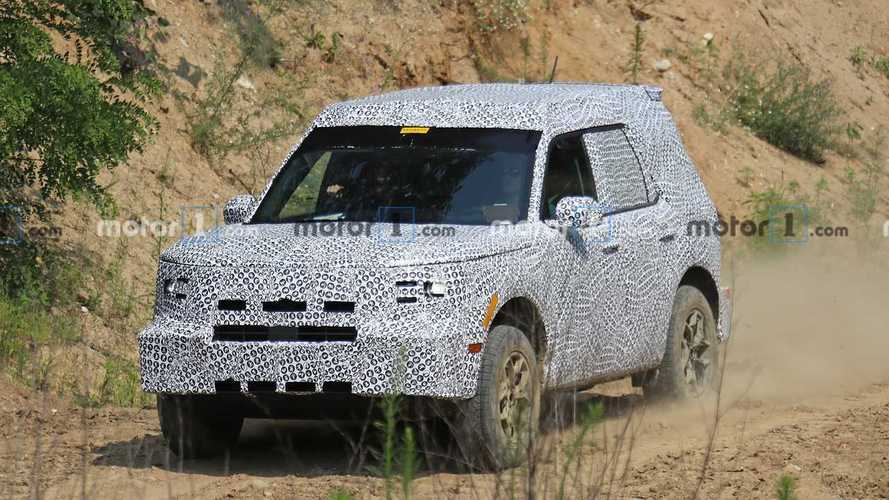 Its square shape matches up with the leaked photos we saw last year.

Here is our first proper look at a vehicle many off-roaders are anxiously awaiting for. Well, it's sort of anticipated, as this will likely be the first “Bronco” we get from Ford. It’s not the larger Jeep Wrangler fighter, but rather, the smaller so-called baby Bronco that should be based on the Ford Escape. Spy photographers caught the square shape tackling dirt in an undisclosed location, and we suspect it caught the passenger in this test vehicle by surprise, as we see him pointing rather emphatically towards the camera.

Aside from this sighting, we’ve also been told this small SUV could be called Adventurer. It’s completely unconfirmed at this point; our spy sources say it’s an inside tip. We did some digging for trademark filings and found an association with Ford and Adventurer back in the 1990s, but it’s listed as ended. That definitely doesn’t mean it’s out of the question, however. Lest we forget, we didn’t uncover the Jeep Gladiator’s name until shortly before its official reveal. We also know Ford has Scout trademarked, so perhaps this could be a Scout Adventurer? Adventurer Scout? Just plain Adventurer? Time will tell.

For now, we have these crisp images to examine. The shape does resemble the leaked baby Bronco photo we saw last year, with a very chunky body and a slight up-kink on the rear doors.  This prototype appears to have cladding on the roof, possibly hiding roof rails while obscuring the degree of slope this SUV will have at the rear. Looking closely at the front, we can make out a slight curve for the grille and headlights, which also matches the leaked photo we saw last year.

This is significant, because Ford asked us to remove that leaked image on a copyright claim. We complied, but the company's action basically confirmed it was the real deal. Our rendering below is pretty darned accurate though, and the prototype seen above is a solid match.

Nothing is known about the powertrain at this point, though with it based on the 2020 Escape we expect to see carryover components. That means a turbocharged 1.5-liter three-cylinder good for 180 horsepower (134 kilowatts) or a boosted 2.0-liter four-pot making 250 hp (186 kW), turning all four wheels with a ride height greater than what you’d find on the car-like Escape.

Ford promised some kind of Bronco reveal for 2020, and we believe this Adventurer, or Scout, or whatever it's called, will lead the way early next year.