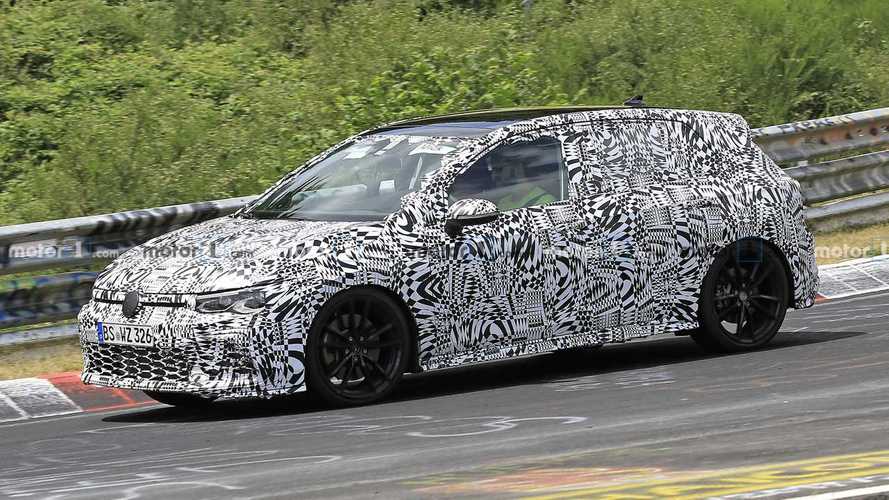 The changes are difficult to spot.

[UPDATE, July 11] Additional spy shots have been added at the beginning of the gallery, below.

Volkswagen is developing the next-generation Mk VIII Golf, and we've already spotted prototypes testing. Now, we have spy photos of the hotter Golf GTI model for the first time. At first glance, the new spy photos look nearly identical to those of the 2020 Golf; however, upon closer inspection, it's easy to tell this is a hotter variant of the two.

This Golf GTI test mule sports bigger and wider wheels, wider side sills, larger exhaust tips, and bigger air intakes compared to the standard camouflaged Golf we've seen. The icing on the cake is the spoiler, which is noticeably larger than the one on the regular Golf. However, for all the visual updates that help differentiate the Golf GTI from the regular model, the new design isn't a larger departure from the current-generation hatchback.

It appears Volkswagen isn't changing the formula for Europe's best-selling car of 2018 – VW sold 445,754 Golfs last year, which is impressive considering the current-generation car debuted in 2012. The massive sales numbers and continued sales success is likely one reason why VW has no plans to alter the design drastically. Instead, giving it a few visual updates inside and out – we've yet to see inside – along with new technology and powertrains could easily keep the Golf a sales leader well into its next generation.

Details about the next-gen Golf are scarce, and information about the GTI is virtually nonexistent. However, customers and fans alike should expect a turbocharged four-cylinder engine. The current Golf GTI cranks out 228 horsepower (170 kilowatts) and 258 pound-feet (349 Newton-meters) of torque. The next-gen GTI should far surpass that, possibly pushing 300 hp (223 kW). The current GTI TCR edition cranks out 290 hp (216 kW)

We were supposed to see the next-generation Golf this September at the Frankfurt Motor Show; however, it's reveal has been pushed back, which increases the chances of the automaker revealing both simultaneously as the company has already said the Golf GTI and Golf R variants are coming next year as well.