It commemorates the 50th anniversary of the film On Her Majesty's Secret Service.

50 years ago, the world bid farewell (albeit temporarily) to Sean Connery as James Bond. On Her Majesty’s Secret Service – the sixth film in the official 007 saga – featured actor George Lazenby in his only stint as the British secret agent. Though most people associate the exquisite Aston Martin DB5 with classic Bond films, the change in actors also brought a change in Astons, specifically the 1969 DBS.

To commemorate the flic, Aston Martin has its next special-edition 007 offering ready to go. The 2019 DBS Superleggera is chosen to carry on the Bond theme, with just 50 planned for production. All the special edition models will wear the same shade of Olive Green, matching the original look of the 1969 DBS. Additionally, the new model also gets a bespoke grille similar in design to the classic Aston. Carbon fiber trim, forged wheels, and special badging on the side strakes complete the exterior makeover, while black leather with gray Alcantara in the greenhouse pays homage to the vintage model. Red accents are also part of the interior dress-up, along with special door sills identifying the car as a 007 machine.

And because we’re talking about James Bond, buyers for each of the 50 special edition models will have the option of purchasing a special drinks case. It’s designed to fit into the DBS Superleggera’s trunk space, and with the raw power this car generates, we suspect anything stored in the case will definitely be shaken, not stirred. 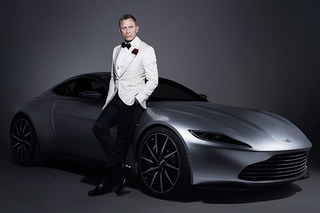 The special edition is just an appearance package – no ejection seats here – but the Superleggera already boasts no less than 715 horsepower (533 kilowatts) from its 5.2-liter twin-turbo V12. With the skinny pedal planted, the hypercar sprints to 100 km/h (62 mph) in 3.4 seconds, which is fast enough to blow the windows out of Lazenby’s classic DBS.

Such power and exclusivity isn’t cheap, however – each car will cost £307,007. It joins the Goldfinger DB5 continuation car that’s now in production, and the DB9 GT Bond Edition from 2015 as the newest member of the expanding 007 special edition family. Delivers will begin later this year.