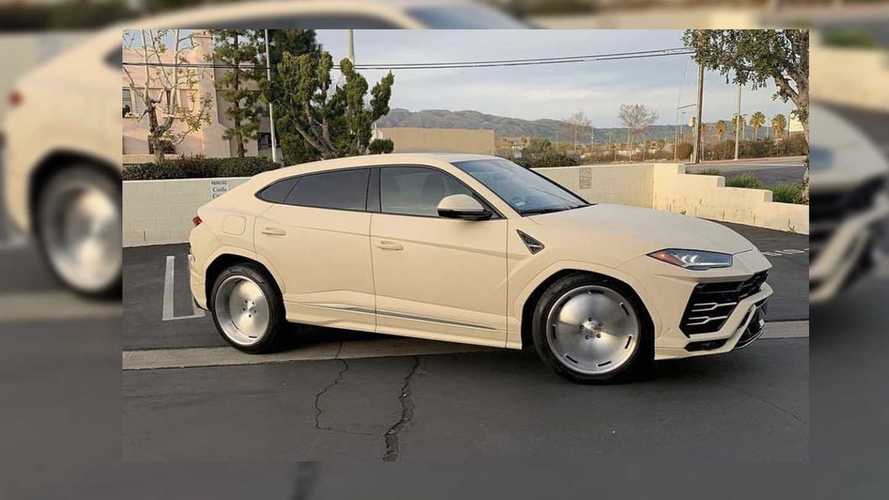 Love it or hate it, the Lamborghini Urus looks imposing. The rakish, angular fascia, downturned headlights, and sloping rear haunch give it an aggressive look only Lamborghini could perfect. But while designers in Sant'Agata needed no help making the Urus a head-turner, Kanye West thought he'd give it a go with his own custom Urus.

Someone captured Kanye taking delivery of his new one-off Urus at his office in L.A., and much like the superstar, it’s over the top. The custom Urus wears a cream-colored matte vinyl wrap by Chatsworth, California-based specialists Just A Wrap. The deep dish, monoblock wheels are designed Boyd Coddington Wheels designed by Kanye. And inside, a bright blue leather finish accents factory grey leather.

The Urus Is One Mean SUV:

The base Lamborghini Urus starts at $200,000 – but we can only guess how much this awful upgrade cost Kanye. The wheels, off the shelf, are about $2,000. A high-end wrap, in most cases, costs upwards of $5,000. And a custom factory interior color (assuming that’s the case) – well, that’s an expense only Lamborghini would know. Whatever the case, Kanye easily added more than $10,000 worth of upgrades.

California Detail Studio, the shop that coated the exterior of Kanye's Lambo Opti-Coat Pro, and the interior with Opti-Guard, posted more images of the celeb's strange Urus on Instagram:

But Ye's Urus isn't the only abhorrent aftermarket Lambo SUV. This turquoise chrome Lamborghini Urus looks even more outrageous. And although TopCar and Vorsteiner's proposed upgrades aren't nearly as nearly as offensive, they both add more edges to the already angular SUV.

I'm sure we'll see some out-of-this-world upgrades to the Urus in coming months as more examples make their way to customers.

Look At These Lambos: