Why buy a car and a truck when you can have both in the same vehicle?

Attempting to fuse a car with a pickup truck, the GMC Centaur with its rear-mounted engine and side-exit exhaust was an unusually shaped concept attempting to be an all-in-one vehicle.

“It’s not just a truck anymore” – that’s what GMC’s marketing team said more than 30 years ago when the peculiar Centaur debuted at NAIAS. The multi-purpose vehicle billed as a “car-truck” was roughly the same length and width as the S-15 compact truck, but sat lower to the ground. The concept’s name was wisely chosen since it was inspired by the half-man, half-horse creature of Greek mythology as a nod to the Centaur’s split personality.

The bulbous, almost minivan-like front half of the vehicle hosted the drive and front passenger sitting on a pair of bucket seats, while behind was a rear bench with enough room for three adults in a “passenger car sedan environment” as per the press release. The silky smooth ride was ensured by a self-leveling air suspension, which was quite the feat back in 1988.

GMC’s two-door Centaur featured an unusual powertrain setup as the 3.0-liter engine was actually mounted at the back, underneath the bed and just in front of the axle. That effectively made it a rear-engined vehicle in the same vein as the Chevy Corvair Loadside or Rampside pickups from the 1960s. The inline-six was hooked up to an “experimental” five-speed automatic transmission sending power to all four wheels.

To make it feel more car-like rather than a workhorse, GMC’s engineers gave the bright metallic red oddity a four-wheel steering system and anti-lock brakes. Inside, the dashboard accommodated a plethora of buttons and knobs to reinforce the idea of a passenger car.

While the GMC Centaur was never considered for a production run, some of its rear styling cues did rub off onto the Chevy S-10 and GMC S-15. 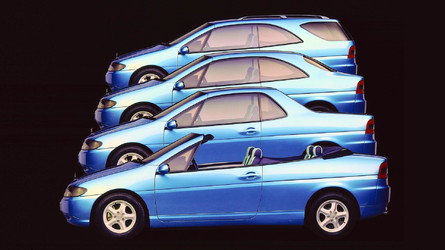 1995 Mercedes Vario Research Car: Concept We Forgot
By: Adrian Padeanu
++
++
Got a tip for us? Email: tips@motor1.com