Boat Smashes Into Truck That Was Towing It 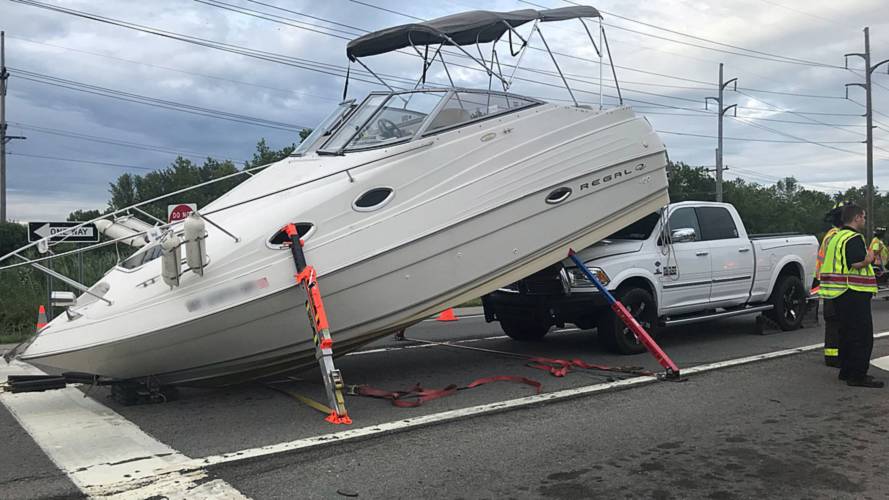 As far as crashes go, this one is certainly unique.

Here’s something you don’t see every day. For the people inside this Ram 2500 pickup, it’s something we suspect they never, ever want to see again. This is a properly frightening scene; fortunately, there were only minor injuries and according to news reports, everyone was treated at the scene. We aren’t sure if that treatment included a change of underwear, but just looking at the above photo gives us an extreme case of butterflies in the belly.

Mazda Pickup Attempts To Mate With Honda SUV, Nobody Injured

The incident occurred on July 21 in Union Hill, New York.  According to the Union Hill Fire Department Facebook page, a call came in around 5:38 p.m. for a multi-vehicle accident. In this instance, multi-vehicle obviously has a wider definition, and we can only imagine what first responders thought when they arrived at the scene.

We’ve not been able to dig up additional information aside from what the Union Hill Fire Department posted online. It doesn’t appear the Ram 2500 towing the big boat hit anything, and there aren’t any other damaged vehicles in the photos. It’s possible the driver was making a hard stop to avoiding running a red light, or perhaps another car forced the Ram to brake hard. In any case, the boat clearly wasn’t as interested in slowing down.

Similarly, we don’t know exactly what all failed on the trailer. It looks like the winch mechanism at the front is still in place, albeit without a hook or strap. The trailer appears to be a standard variety without rollers, meaning the boat is simply floated over the trailer and winched into place up front, then pulled from the water. As such, a large boat like this – we’re guessing easily over 20 feet – would weigh heavy on the carpeted trailer. Even without any straps, it would take quite a lot of effort to shove the boat off its cradle, never mind completely up and over the truck. By the same token, that much mass doesn’t like sudden changes of direction.

We’re just glad there weren’t serious injuries. Judging by the way the boat sliced across the truck, this certainly could’ve been much worse.