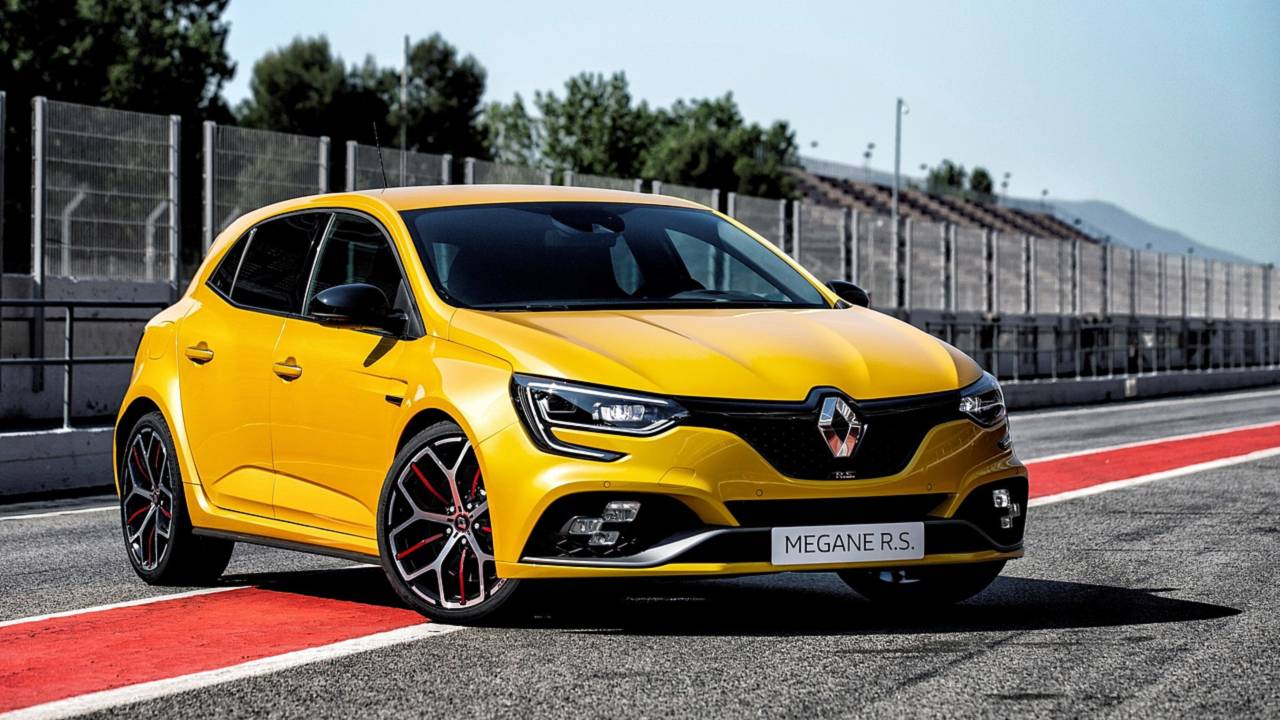 As promised last year when the regular Megane RS made its debut, Renault is introducing the even hotter Trophy derivative packing an assortment of upgrades. For starters, the turbocharged four-cylinder 1.8-liter engine has been massaged to deliver more power, now at 296 hp instead of 276 hp. Torque is also up from 390 Newton-meters (288 pound-feet) to 400 Nm (295 lb-ft) with the manual gearbox, but go for the optional dual-clutch automatic and maximum torque rises to 420 Nm (310 lb-ft).

There’s actually more to the Trophy version than its upgraded engine as Renault will be selling it as standard with the Cup chassis bringing a stiffer suspension setup and a Torsen mechanical limited-slip differential. The French hot hatch will ride on exclusive 19-inch alloy wheels shod in Bridgestone Potenza S001 tires and from 2019 it will gain an optional 19-inch cutting weight by 2 kilograms (4.4 pounds) per wheel and wrapped in tailor-made Bridgestone Potenza S007 rubbers not related in any way to James Bond.

Since we’re on the subject of wheels, behind them are newly developed bi-material front brake discs cutting unsprung mass by 1.8 kg (4 lbs) per each wheel and paired with red Brembo calipers. Since the car has the Cup chassis, it means the shock absorbers are 25 percent firmer and the springs are 30 percent tighter compared to a Megane RS fitted with the Sport chassis. In addition, the anti-roll bars are 10 percent stiffer.

Like the lesser Megane RS, the Trophy version boasts four-wheel steering with the rear wheels turning in the opposite direction to the front wheels at low speeds and in the same direction at high speeds. At an additional cost, customers can add Recaro seats featuring an updated design than those of the previous-generation model. Wrapped in Alcantara, these seats lower the seating position by 20 millimeters (0.8 inches) for a more intense driving experience and are more adjustable in height compared to the ones installed in the Megane III RS.

Developed by Renault Sport with input from Nico Hülkenberg, the new Megane RS Trophy will be available in Europe later this year. We're already hearing rumors of a hardcore two-seater Trophy-R to go after the Honda Civic Type R's record for the fastest front-wheel-drive car at the Nurburgring established last year with a time of 7 minutes and 43.8 seconds.

Sports car lovers can look forward to even greater performance and a sportier design, as New Renault MÉGANE R.S. TROPHY boosts the Renault Sport line-up by extending the family of Trophy versions deployed since the first generation of Mégane R.S.

New MÉGANE R.S. TROPHY comes with a brand-new version of the 1.8-litre turbo engine, delivering increased power output of 300hp and torque of 420Nm1, largely thanks to the use of pioneering technologies, especially for the turbocharger and exhaust system. This engine can be combined with a manual or EDC dual-clutch gearbox.

And for the best possible feeling in the car, New MÉGANE R.S. TROPHY can be fitted with a new generation of Recaro front seats, covered with Alcantara® upholstery.

Meeting the needs of enthusiasts looking for exclusivity, the TROPHY version remains eminently suited to everyday use, offering all the features of Mégane R.S., particularly:

"I have been involved in the Mégane R.S. development process since last year and I'm very pleased to see an even sportier version added to the family! Each of the new features on New Renault MÉGANE R.S. TROPHY offers greater sports performance and feel. It's obviously positive to have more power and better grip through the tyres and to benefit from improved braking endurance. I also enjoyed the feeling offered by the new seats: the support they provide for sports driving is excellent." Nico Hülkenberg, Renault Sport Formula One Team driver and Renault Sport ambassador