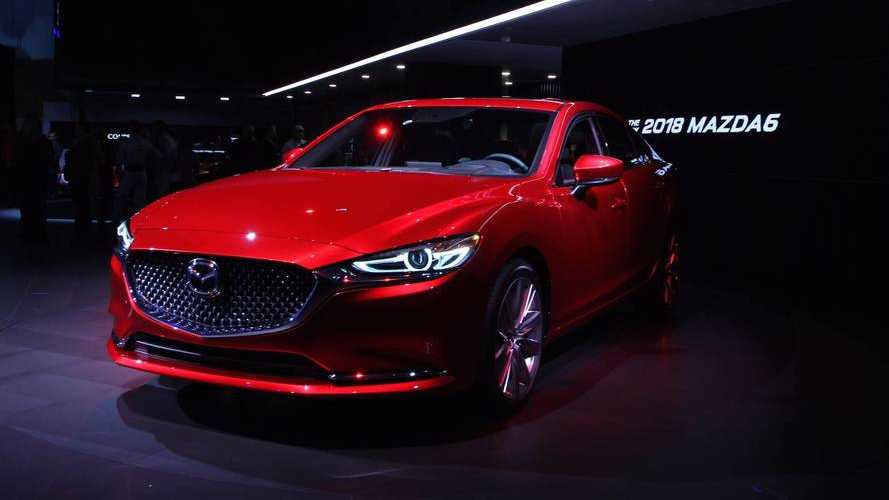 A minor facelift is accentuated by a major power boost.

Mazda says the new Mazda6 is re-engineered, but looking at the company’s 2018 flagship sedan, it doesn’t seem much different than the outgoing model. It’s true that, at a glance, it’s the same attractive mid-sizer turning the front wheels, with stats that still match up to the outgoing model. That is, all stats save for the one labeled horsepower, provided you opt for the new SKYACTIV-G 2.5 T engine. In case you’re wondering, the T stands for turbo.

Yes, the Mazda6 is finally gaining some much needed oomph in the form of the company’s boosted 2.5-liter four-cylinder. In the 6, the engine makes 250 horsepower (186 kW) and a full 310 lb-ft. (420 Nm) of torque. It runs what the automaker calls a Dynamic Pressure Turbo, using a small inlet to spool the turbine quicker at low engine RPM with a larger passage opening at higher speeds. The result, Mazda says, is nearly instantaneous boost, and as long as you run 93 octane fuel, you’ll get the full monte. Lower octane gas doesn’t hurt the car, but it does drop the power to 227.

Still, that’s a marked improvement over the naturally aspirated engine, which soldiers on with the same 184 hp despite internal enhancements said to offer better efficiency and smoother operation. One interesting new feature is cylinder deactivation, which can engage at steady speeds between 25 and 50 miles per hour to turn the 6 into a twin-cylinder car. When full power is needed, Mazda says all four pots will kick back in with an “imperceptible switchover.” Knowing what we know about four-cylinder engines, that’s a feature we definitely want to experience for ourselves before removing those quotation marks. As for the efficiency gains, Mazda hasn’t yet released any figures.

The other big story for the new Mazda6 comes inside, where just about everything is new save for the steering wheel and a few trim pieces. The redesigned dash takes on a stretched look that lends a very wide feel for driver and passengers. It’s also rather swanky, with top-of-the-line Signature models getting Sen wood, Nappa leather, and UltraSuede NU available as trim for the doors, seats, and dash.

The changes outside are far less obvious. The Mazda6 gets the company’s new-look grille, along with standard LED headlights and integrated fog lamps. Painted surfaces extend lower on the body, with Soul Red Crystal joining the palette of exterior finish options. A new range of 17-inch and 19-inch wheels rounds out the external refresh.

The engine and interior changes are certainly big news for the new Mazda6, but engineers also beefed up the chassis as well. There’s some extra reinforcement in key areas, some additional suspension tuning, and the steering rack is rigid-mounted up front. The result is a chassis that’s said to be more neutral with reduced NVH, enhanced refinement, and steering that is more responsive to input. Speaking of input, you can also still row your own gears in the Mazda6 with an honest-to-goodness six-speed manual, but only with the 184-hp engine – the turbo gets a six-speed automatic Really, Mazda?

All in all, it seems Mazda is trying to find some middle ground between sedans like the Toyota Camry and Honda Accord and higher end luxury offerings from the likes of Lexus or Infiniti. All the above still offer more horsepower, and Mazda hasn't yet mentioned pricing for its new flagship. But at least in the higher-spec models, Mazda seems to be seeking a deeper level of luxury than one might normally find in a mainstream sedan. We’ll get a better idea of that balance – as will the rest of the world – when the 2018 Mazda6 goes on sale next spring.

These are but a small sample of the Mazda vehicles from the past 50 years that have embodied “Mazda
Premium,” a set of guiding principles that complements the automaker’s human-centric design and
engineering. Mazda uses these principles to build cars and crossover SUVs that compete in a class
above, at a price that is readily affordable, offering a depth of engagement with its owner that satisfies
at every touch point. With vehicles like these, it is Mazda’s goal to enrich people’s lives through a car
ownership experience that celebrates driving, and to become a brand with which customers feel a
strong emotional connection.

The re-engineered Mazda6 certainly delivers all of the above, elevating Mazda6 from its traditional
competitive set into a higher class, with unparalleled craftsmanship, design and technologies for the
driver who savors every moment behind the wheel. Yet, Mazda6 is also serene, thoroughly reworked
underneath its sheet metal to deliver a refined experience befitting of a far more expensive car.

The 2016 Mazda CX-9 three-row crossover SUV was a remarkable step for Mazda. It once again elevated
Mazda, showing if Mazda built an SUV with superior driving dynamics, class-above refinement, an
abundance of amenities, technology and a strong engine, customers would come. After more than a
year since going on sale, approximately 55 percent of all Mazda CX-9 crossover SUVs sold in the U.S.
have been either high-level Grand Touring models or top-trim Signature models—an unusually high
number.

The Signature trim level has been well received, selling more than twice as well as expected, and
attracting customers who are trading up from traditional luxury brands.

It was natural, then, that Mazda would follow this plan with its flagship sedan. Mazda6 has received
improvements every year it has been on sale. Updates for the previous model year added more sound
insulation throughout its cabin and available Nappa leather interior appointments. Mazda6 also received
standard G-Vectoring Control, a Mazda-exclusive technology that makes steering response more direct
and linear by using a minute reduction of engine torque at turn-in to put extra weight on the front tires.
But simply adding Nappa leather and some new technologies does not a Signature model make.

Thus, Mazda6’s chassis has also been thoroughly revised to provide a more supple ride, greater agility
and dramatically improved NVH. Mazda6’s Signature interior features authentic materials—brown
Nappa leather whose color is inspired by the aged wood in ancient Japanese temples; UltraSuede® NU
that is adorned with a subtle gold tint, using a similar technique to that which is used to make ornate
kimonos; and Sen wood accents, a type of wood often used in taiko drums and Japanese furniture.

Perhaps the greatest upgrade of Mazda6 Signature is its source of motivation. Mazda’s award-winning,
SKYACTIV-G 2.5T gasoline turbo engine returns for its second application. The SKYACTIV-G 2.5T is an
engine renowned for its nearly instantaneous, ample torque, courtesy of its Dynamic Pressure Turbo,
which accelerates exhaust gasses through a tiny inlet to quickly spool up its turbocharger at low RPM
before opening a larger secondary passage to use throughout the engine’s operational range. The
engine produces torque on par with a 4.0-liter V-8 engine. Mazda6 was already a class favorite among
discerning drivers. These latest upgrades will launch Mazda6 above the mainstream sedan fray,
changing the idea of what an affordable midsize sedan can and should be.

Inside, the interior is all-new, with only the steering wheel and small trim pieces carried over from its
predecessor. Most noticeable is its horizontally stretched dashboard that accentuates Mazda6’s width
and belies a sense of subtle sophistication. On Mazda6 Signature models, Sen wood, Nappa leather and
UltraSuede® NU adorn the doors, seats and dashboard, providing an atmosphere that can coddle on
Rodeo Drive just as easily as it can enliven spirited drives on Mulholland.

Lest one thinks the new Mazda6 hasn’t received the technology to match its upscale interior, there’s
more in store.

Available ventilated front seats in Mazda6 are a first for the brand, and wick away warm air from the
front passenger and driver’s backs to keep them cool. Rear seats have also been redesigned with highdensity
urethane foam, enabling greater comfort.

In addition to the seats, new technology comes by way of available features:

Mazda6 offers two powertrain options in the U.S., starting with the torquey, fuel-efficient SKYACTIV-G
2.5 naturally aspirated engine. Mazda6’s 2.5-liter, four-cylinder engine comes with a host of upgrades to
reduce internal friction and improve efficiency across all RPM, and it adds a greater level of refinement.
A new technology that is unique to Mazda in North America is cylinder deactivation in a four-cylinder
engine. The outside two cylinders can shut down when the vehicle is operated at steady speeds
between 25 and 50 mph, but all four cylinders work instantaneously when needed for maximum
performance. A centrifugal pendulum has been adopted in the torque converter of the six-speed
SKYACTIV-DRIVE automatic transmission, counterbalancing any vibration that might otherwise be felt
when running on two cylinders. The result is an imperceptible switchover between two- and fourcylinder
modes, yet with very tangible real-world efficiency benefits.

Mazda’s industry-first Dynamic Pressure Turbo builds boost nearly instantaneously by using a small inlet
port to force air into its turbocharger, akin to how water velocity increases when one holds his or her
thumb over a hose. From there, a secondary valve can open up at higher RPM for increased airflow and
maximum horsepower. A pulse-scavenging 4-3-1 manifold that prevents exhaust backpressure and helps
the engine breathe freely.

Cooled exhaust gas recirculation (EGR) is used to reduce combustion temperatures, preventing knocking
and therefore reducing the need for fuel-enrichment (when extra fuel is dumped into the cylinders as a
means to cool the engine). Many times when turbocharged engines fail to achieve EPA-estimated fuelefficiency
numbers in the real world, it is because laboratory tests don’t replicate the higher-load driving
styles that necessitate fuel-enrichment.

In too many instances, turbocharged engines are mated to continuously variable automatic
transmissions (CVT), operating in a narrow band of efficiency, sacrificing a connectedness between
driver and car—a valued characteristic of all Mazda vehicles called Jinba Ittai. Mazda’s six-speed
SKYACTIV-DRIVE automatic transmission, paired as standard to the SKYACTIV-G 2.5T engine, keeps its
torque converter locked through most of its operation, giving a more connected sense of controllability
than many other automatic transmissions.

Both engines complement Mazda6, with the naturally aspirated engine serving as an all-around efficient,
responsive powertrain and its turbocharged sibling amplifying the driving performance for which
Mazdas are known.

Finally, as a champion of the manual transmission, Mazda6 will continue to offer the SKYACTIV-MT,
paired with the SKYACTIV-G 2.5 engine.

But What’s an Engine without a Chassis?

In this latest round of thoughtful improvements, engineers have revisited every aspect of Mazda6’s
chassis, with its suspension offering a smoother, more linear ride quality and greater NVH refinement
similar to the ultra-quiet CX-9. Its steering rack is now rigid-mounted to the chassis, offering greater
steering response and feel, and its SKYACTIV-CHASSIS has been stiffened in complement with the
revised suspension to offer both a smoother ride and to improve outright dynamic performance.
Enabling this more comfortable ride without compromising the Mazda6’s handling, the suspension
geometry has been revised, with roll-steer changes that promote more neutral handling. The steering
rack also is now rigid-mounted to the chassis, offering more direct steering response.

In Pursuit of Premium

But together, they complete what Mazda expects to be yet another step to elevate the brand beyond
the realm of mainstream vehicles, offering a “Mazda Premium” experience that will delight customers.
As with its predecessor, the new Mazda6 will land among the world’s best cars, for those who love to
drive. But it will aim higher, moving Mazda’s consideration with customers to a new, class-above place,
because Mazda never stops challenging.

The re-engineered, refined Mazda6 is expected to go on sale in spring 2018.