Unrestored Plymouth Superbird Could Bring In Big Money At Auction 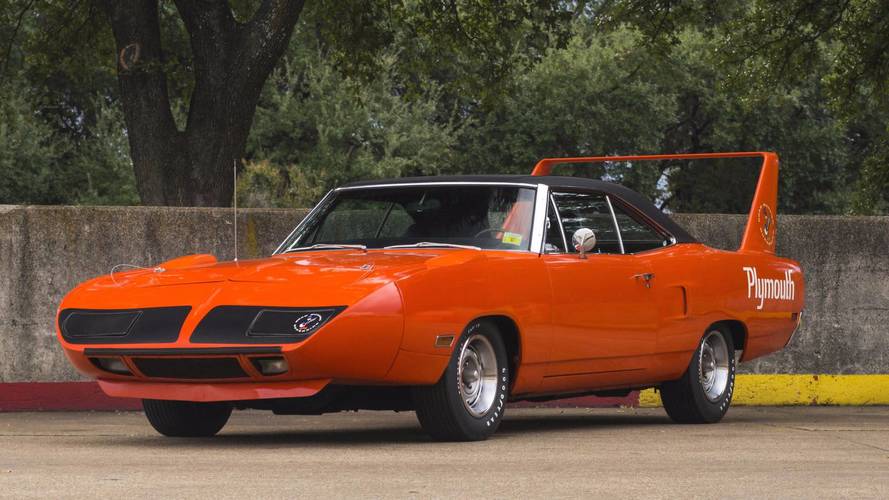 It will cross the block on November 16 in Las Vegas.

Ask any muscle car collector what their holy grail car would be, most would likely answer with one word: Superbird. Introduced in 1969, the Plymouth Superbird was distinguished by its sloped nose and massive rear wing. It was essentially a highly modified version of the Road Runner, and in its most powerful trim it came equipped with a 426 cubic-inch Hemi V8.

Today, taking home a pristine example will set you back no less than six figures, if you're lucky. This particular example is no exception. Heading to auction as part of the Mecum Las Vegas sale, the Superbird pictured here is completely original, and has has just two owners since new.

The exterior is finished almost entirely in its original Tor Red paint job (with the exception of the nose cone), and comes paired to a handsome black top and rallye road wheels. The interior is finished in an original back vinyl, and features bucket seats, a simulated woodgrain steering wheel, power windows, and a remote driver’s mirror.

Under the hood is the original 7.0-liter Hemi V8 that produced 425 horsepower (317 kilowatts) when new, allowing for a 0-60 mile-per-hour time (97 kilometers per hour) of just 5.5 seconds. All that power comes paired to a 727 Torqueflite automatic transmission, power steering, and power brakes with front discs.

The car comes complete with nearly all of its original documentation, including the original window sticker, factory invoice, the dealer copy of the shipping invoice, bill of sale signed by Stokes, pre-delivery checklist, and a copy of the original title. The car was sold new at M&L Motor Co., Inc. in Lexington, North Carolina in 1969, and has changed hands just once in its 48-year history.

Though Mecum doesn’t give an estimate as to its expected auction price, don’t expect this one to go for cheap. Hagerty estimates that the average price for a Hemi-powered Superbird is $220,000. But previous Superbirds at auction fluctuate in price anywhere from $350,000 to more than $1 million. Bidding should see this particular example closer to the top end of the pricing spectrum.

The question should be asked, how would you personally have optioned a new Superbird back in 1969? Of course, this model was new for the 1970 year, but federal changes to headlamp rules starting on January 1, 1970 (as well as NASCAR’s requirement for public availability at least a month before the Daytona 500), squeezed the entire production run into approximately eight weeks, from mid-October to mid-December of 1969. In fact, the sales paperwork to the dealerships did not go out until October 27, when construction of the cars at the Lynch Road assembly plant was already underway. As a result, most were equipped with the standard U-code 440-4 engine. As a further result, it is very possible the car offered here truly is the ultimate Superbird.

Anyone there that November checking off boxes with price not being a consideration, probably would have checked E74 first. That is what this car’s first buyer, Smith Stokes Jr., did. Code E74 got a 426 Hemi installed under the hood. Stokes was employed at M&L Motors in Lexington, North Carolina, at the time, which was actually fairly close to a place called Randleman where a gentleman named Richard Petty had a race shop. In fact, it was the Superbird’s release that brought Petty from Ford back to Plymouth. Selling hot cars was part of what a salesman like Smith did; this car would be one to showcase the model line.

This Hemi was backed by the A36 Axle package, which consisted of the A727 Torqueflite and 3.55:1 Sure Grip differential (the highest gear available due to cooling issues with the small grille opening), plus 26-inch radiator, power steering and power front disc brakes. It was the rest of the options that push this car into truly exceptional territory. On the outside, the car has all the A13 Superbird package aero components, plus tinted glass, remote outside mirror, 15-inch Rallye wheels, chrome exhaust tips, rear bumper guards, door-trim moldings and extra-cost EV2 Tor-Red paint.

When originally assembled, the noses of these cars were painted in lacquer; due to the problems that coating caused later, that part has been repainted on this car. The rest of the car features original paint applied at Lynch Road all those years ago. The paint is augmented by the original R-code engine, which was refreshed to OEM specifications. It was delivered new without the Hemi decal on the air cleaner and remains that way today. Additionally, the Sox & Martin sticker on the dash is completely legitimate, as Smith took the car there for tuning work before the Burlington-based racing enterprise formally ended business in 1974.

However, for the occupants, it is the inside that truly showcases what could possibly be ordered on a Superbird. Starting down the accompanying window sticker and broadcast sheet finds C15 deluxe seat belts, C16 console, C62 6-way driver’s seat, C92 floor mats, J41 pedal dress-up, N85 tachometer, P6XA premium black/charcoal interior, P31 power windows, R22 AM/8-track stereo and S81 wood-grain sport steering wheel. The power-window option is rarely found on any Superbird, since so many were standard sales-bank ‘Road Runners’ ensuring dealerships could make them affordable to buyers.

With this car’s hefty price tag coming in at $4,776.15, it missed the affordability mark, and it remained unsold and was formally owned by the dealership until 1977 when Stokes bought it. Always treasured and well-maintained, it has only recently entered the collector hobby when acquired by the second owner.

The car is documented with an original broadcast sheet, the original window sticker, factory invoice which required two pages due to the options, the dealer copy of the shipping invoice, bill of sale signed by Stokes, pre-delivery checklist and a copy of the original title first issued in 1977. This amazing car has had only two owners since its construction and release to Plymouth’s dealership network in 1969, and today it's one of the most original and highly optioned Hemi Superbirds known to exist.