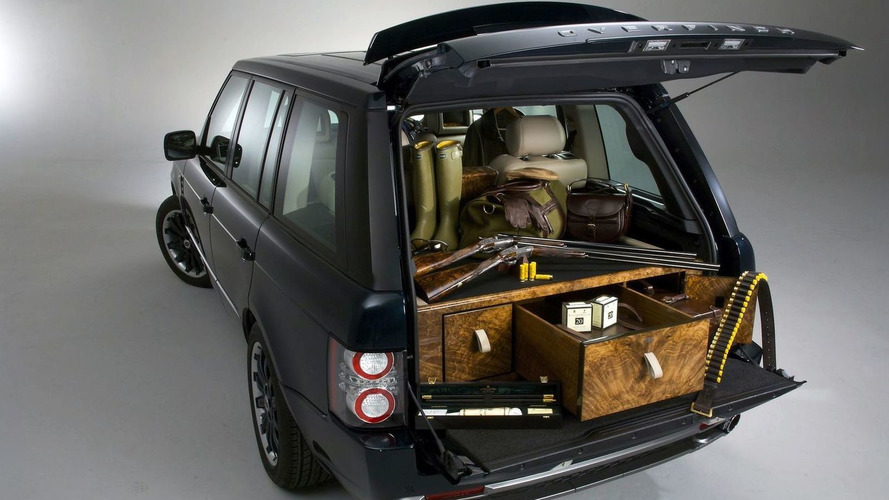 The Overfinch Range Rover comes with custom wood trim inspired by rifle stock used by Holland & Holland, leather from private airplanes, and a gun cabinet. Did we mention the free booze???

British tuners Overfinch have released official photos and details of their very luxurious Holland & Holland Range Rover.  Named for the famous London gun maker, only 100 units of the SUV will be assembled annually.

New customers can opt for a vehicle based on either the 2010 LR-V8 Supercharged model that makes use of 503 horsepower, or the LR-TDV8 unit that uses 270+ horsepower.

The rifle manufacturer clearly inspired the vehicle's interior.  Overfinch engineers uses either "gunstock walnut" or "wood veneers" for the 31 interior inserts.  Designers chose from the same leather typically used on private jets, and have made seven different tones available to the new owner.  A special, quilted-leather headliner is also availble.  Alcantara may also be chosen.  Re-furnishing the trim alone takes "over 150 man hours."

Enticingly, the custom steering wheel can be engraved with the "customer's own shotgun."  Overfinch installed a "shotgun grade steel plaque," presumably with the vehicle's edition number, in the SUV.

Other features in the four-seater includes a floor-mounted refrigerator with crystal bucket and flutes for the champagne afficionado.

Exterior features include bodywork in one of four colors, although a two-tone is also an option.  20-inch Tiger wheels with all-weather tires can be replaced with 22-inch wheels for drivers not interested in off-roading.  Winter wheels can also be ordered.

Vehicle pricing begins at £120,894 (excluding taxes on charges) for SUVs sent out of the UK, and from £139,650 (including taxes and paperwork) inside the United Kingdom.  And those prices include the removable hand-crafted gun cabinet capable of being locked down when necessary.

And, if that isn't enough, the vehicle will be delivered with a full stock of Balvenie single malt whisky, Hendrick's single batch gin, Ivan the Terrible vodka, Pol Roger Champagne, and Willow Spring bottled water.  These bottles will be refilled throughout the first year of ownership, making the Overfinch Holland & Holland Range Rover seem like a bargain when you consider how much the folks at WCF drink...