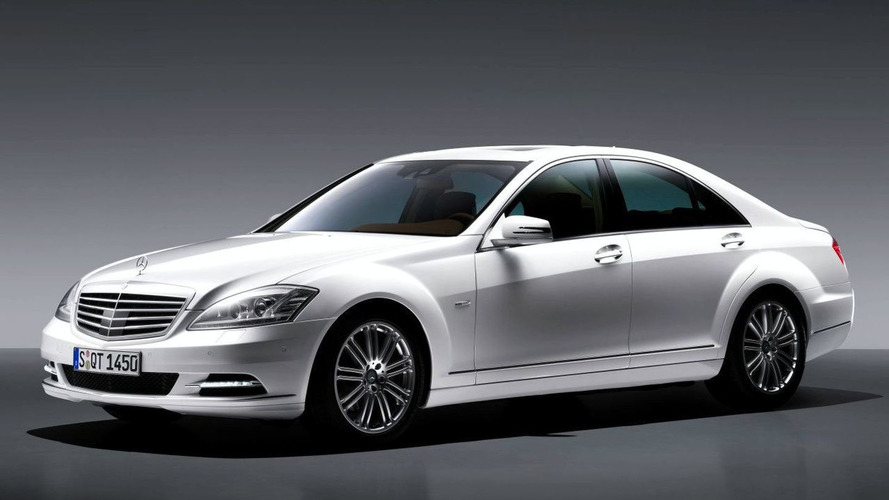 Mercedes has officially unveiled the facelifted 2010 Mercedes S-Class less than 24 hours after we first published pictures from a leaked brochure.

Mercedes has officially unveiled the facelifted 2010 Mercedes S-Class less than 24 hours after we first published pictures from a leaked brochure.

From the front the facelifted model boasts a more pronounced grille, a revised bumper with chrome inserts in the air intakes, as well as LED daytime driving lights, indicators and marker lights for the S 400 HYBRID and S 600 (They are part of a package on the other S-Class models). Out back the changes are less noticeable as the only modifications are the addition of new LED taillights and a revised exhaust system that is integrated into the rear bumper.

Despite the minor makeover, the big news is the launch of the S 400 HYBRID which boasts a fuel economy rating of 7.9L/100km and emits just 186 grams of CO2 per kilometer. Set to become the world's first production vehicle to combine a hybrid powertrain with a lithium-ion battery, the S 400 HYBRID uses a 3.5-liter petrol engine that produces 205 kW (279 hp) and an electric motor that cranks out 15 kW (20 hp).

As with all previous S-Classes, the updated 2010 model features a host of new technologies to keep drivers safe. The Adaptive Highbeam Assist system adjusts the vehicles headlights to maximize forward visibility while preventing oncoming motorists from being distracted by the unnecessary use of the highbeams. Other updates include a revised Night View Assist system with pedestrian detection, a new Lane Keeping Assist function which vibrates the driver's seat when the vehicles leaves a lane unintentionally, and a new Speed Limit Assist system that displays the current speed limit in the central display.

Of course not all technology has to be relegated to keeping us safe, so Mercedes developed several new features such as a SPLITVIEW monitor which allows the driver and front seat passenger to look at the same screen and see different things. Thanks to this odd but ingenious bit of engineering, the driver can view a GPS map of the car's current location while the passenger watches a DVD movie. Among the other upgrades are a revised COMAND system with a new SD card slot, advanced Bluetooth connectivity, and the addition of a USB port. Rear seat passengers also get a healthy dose of entertainment as the updated S-Class offers a rear-seat entertainment package that comes with two eight-inch displays and wireless headphones as well as a remote control that can operate all of the audio and telematic functions of the COMAND system.

Scheduled to go on sale in Germany this June, the facelifted 2010 S-Class will take on the recently redesigned BMW 7-series and Audi's upcoming 2010 A8.