This AMX/3 could be the most expensive AMC ever sold 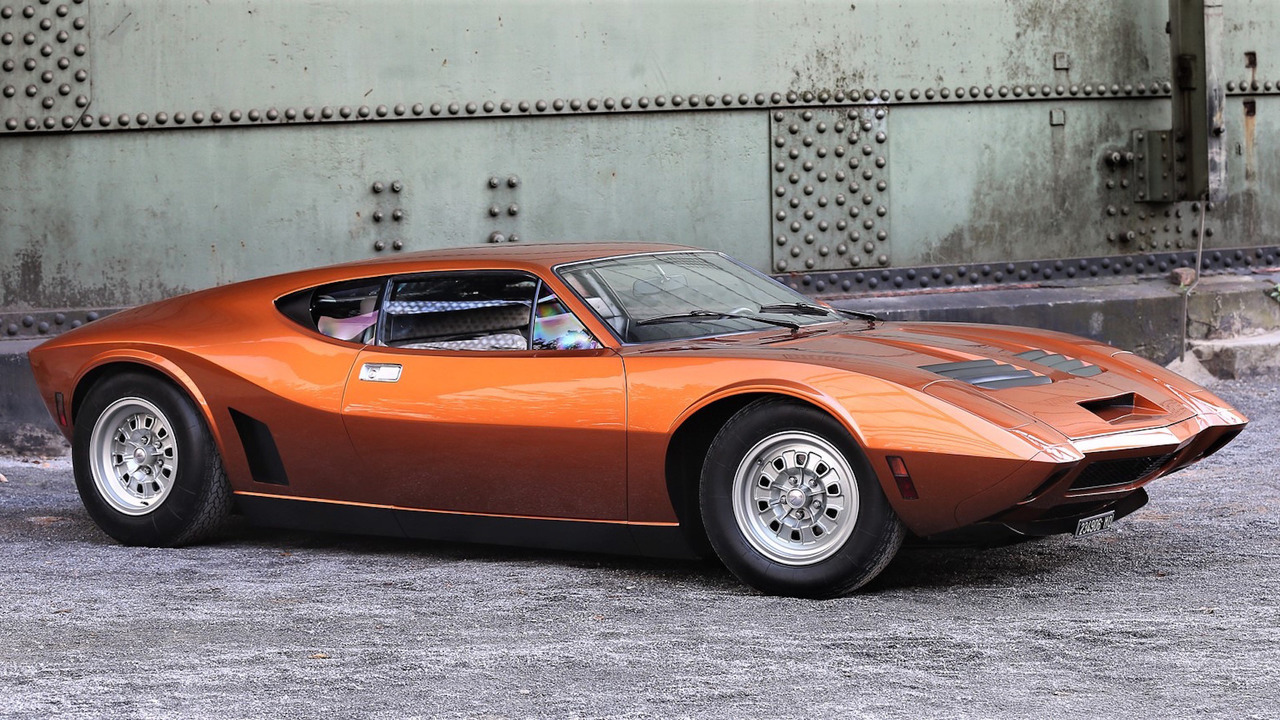 Just five examples were built – and this one is heading to auction.

Before the American Motor Company was banished to the Island of Misfit Automakers in 1988, it was able to piece together a sports car worthy of world recognition. That car was the mid-engined AMC AMX/3. It was introduced at the Chicago Auto Show in 1970, and was designed by AMC, but assembled by Bizzarrini in Italy.

Though it never made its way to the production production line, a total of five concept cars were completed before the plug was pulled on the $2 million project. No one knows exactly where all five of those cars currently reside – but at least one will be hitting the auction block in Arizona as part of the Gooding and Co. Scottsdale sale next month.

Wearing a handsome copper finish and all its original fixtures, Gooding and Co. estimates this particular example could fetch seven figures when it crosses the block. Under the hood is a 390-cubic-inch V8 paired to a four-speed manual gearbox. When tested at Monza, it was able to surpass its original estimated top speed of 160 miles per hour (257 kilometers per hour) thanks in part to Dick Teague’s super slippery design.

Though production initially called for 1,000 examples to be built, sadly, just five came from the Bizzarrini factory in Italy. U.S. Government bumper regulations were to blame (seriously). This one is an early example, being a 1969 model, has seen a few different owners in its lifetime. It was first sold in 1971 to Jerry N. Warden of Indianapolis, Indiana, who eventually passed it down the line to four different owners, the last one purchasing it in 1989.

Since then, it’s been exhibited at a number of different concours events around the world, including Pebble Beach twice, and even the Concorso d’Eleganza in Italy in 2015. Given its rarity and its drop-dead-gorgeous good looks, Gooding and Co. estimates it could sell for anywhere between $900,000 and $1.3 million. If it does break the million mark, it would be the first AMC car ever to do so.

While well-respected for producing sensible, economical cars, American Motors (AMC) responded to declining market share in the mid-1960s with a change in focus to performance. Given new creative freedom, American Motors styling director Richard “Dick” Teague and his design team unleashed the bold “Project IV” concept cars that toured US auto shows during 1966 and previewed AMC’s future designs, including the AMX that would debut alongside the sporty Javelin for 1968. Momentum heightened in January 1967 when AMC chose Gerald C. Meyers as vice president of automotive development and manufacturing. In June 1967, Meyers gave Teague and his chief designer, Bob Nixon, approval to propose a radical mid-engine prototype in competition with a proposal from Italian stylist Giorgetto Giugiaro.

Teague and his staff replied with the AMX/2, itself succeeded by the AMX/3, which was selected for development. Italian engineer Giotto Bizzarrini, renowned for his own road and racing cars, as well as his prior work for Ferrari, Lamborghini, and Iso, performed chassis and suspension design. BMW was tapped for engineering and testing, internally coding the AMX/3 as Project E18. Giugiaro’s ItalDesign would structurally perfect the steel semi-monocoque body. Bizzarrini and close collaborator Salvatore Diomante would assemble the AMX/3 through a new joint-venture company. Chassis and body parts were purpose-designed, while other items were sourced from AMC and external suppliers. Power was supplied by AMC’s 390 cid V-8 engine, rated at 340 hp and mated to a four-speed gearbox/ rear transaxle supplied by OTO Melara. Exhaustive testing by BMW yielded high body rigidity, a state-of-the-art brake system, and improvements to the clutch.

Initial estimates projecting a run of 1,000 cars quickly shrank to 26, but the highly anticipated introduction of the AMX/3 at Rome on March 23, 1970 – one day before the launch of the Ford-powered De Tomaso Pantera – was a full success. Before AMX canceled the project, five AMX/3s were completed. Bizzarrini and Diomante built a sixth example from remaining components, which they hoped to market as the Sciabola (Sword).

Extensively researched with exceptional commitment, and beautifully restored, this stunning AMX/3 carries unbroken provenance from new and a particularly fascinating early history as the Monza test car for the AMX/3 development program. Following assembly, it was tested by BMW in Germany and then sent to Italy, where it was photographed at the legendary Monza circuit, where it exceeded the targeted 160-mph top speed and posted blistering lap times. Several images show the car at speed and in the pits during the Monza test sessions and others clearly show its tell-tale features, including an additional lower radiator opening and central air scoop, Vitaloni mirror, US side markers, rear-cooling air intakes, and the fuel-filler door at the driver’s side of the car.

Following cancellation of the AMX/3 program, the car remained in Italy. During March 1971, American Motors agreed to sell an AMX/3 to Jerry Werden of Indianapolis, Indiana, a consultant who was friends with Roy Chapin Jr., then AMC’s president. Werden’s associate, William deMichieli, also expressed interest in acquiring an AMX/3, and according to the letter dated March 30, 1971, on file from H.H. Siegel, director of product cost control at AMC, both the “… red Monza car” and the “Torino show car” would be sold to Mr. Werden via Bizzarrini in Italy.

Mr. deMichieli purchased the Monza car via Werden but only retained it for a year or so. Subsequent owners – both collectors from Indianapolis and passionate about the car – include James Silvey and then in 1976, Jack Cohen, who retained it until August 1989, when it was purchased by Walter and Diane Kirtland. They had the AMX/3 restored at Bill de Carr’s famous hot rod shop in Bellfower, California, in preparation for the 1990 Pebble Beach Concours d’Elegance®; importantly, both Bizzarrini and Diomante were in attendance there. Following their review of the car’s history, both men contributed handwritten notes in a photo album of the car, affirming this AMX/3 as the Monza test car. Bizzarrini stated: “The car in the photos is the experimental AMX/3 on which all checks and setup tests were performed. After being taken to Munich-BMW for static tests, it was returned to Livorno, where it began its road tests, which ended in Monza with the accomplishment of a lap time of 1 minute, 59.8 seconds.” Diomante’s note read: “This car was built at Autocostruzione ‘SD’ in 1970 and based on a design by Giotto Bizzarrini and the photographs show the technical tests executed at Monza.”

In May 2014, the Kirtlands sold the Monza test car to the current German owner, who reviewed the car upon delivery that August and decided to have it restored again. Performed along two distinct stages, the restoration was completed by the finest experts in Germany. Following completion of the first stage, the AMX/3 was shown at the 2015 Concorso d’Eleganza Villa d’Este, followed by the second, more involved stage, in preparation for the car’s display at the Pebble Beach Concours d’Elegance® in 2016.

Since the Monza test car was a true prototype, created for development and testing, and not intended for public sale – essentially a “test mule” – it was not finished in period in all respects, including brightwork, badging, and radiator exhaust openings. It also showed various modifications, updates, and improvements compared to the earlier design drafts. Great care was taken by the owner and restorers to research and evaluate the historical record presented by the car itself and its relatively unfinished state prior to the most recent restoration. In particular, the owner’s stated goal was to “… convey the tremendous excitement that the AMX/3 would have created, had the program gone forward as planned. This translated into two goals: bring to life the car’s unique design and make sure that the car drives as well as it can and can be demonstrated in motion.”

To say the restoration fulfilled the owner’s objectives is a massive understatement, with the car brought to meticulous show-quality condition. In addition to winning Best in Class at Pebble Beach, it also was road-registered in Germany with TÜV documents. Additionally, a FIVA Identity Card (no. 051982) was issued in May 2015.

An exceptionally rare offering at auction, the AMX/3 Monza test car is complete with an exhaustive document detailing the genesis and history of the AMX/3 program, this vehicle’s full provenance, and details of the restoration process including photographs and a list of the car’s technical details, parts, and components. Incredibly rare, extensively documented from new, and freshly restored to elite concours-winning form, this AMX/3 has impeccable and fully confirmed provenance.

This car was a milestone, coming from a unique project that brought together some of the brightest minds in the automotive world of the late 1960s and 1970s. It embodies the sum of the design prowess of the American Dick Teague, the exceptional chassis engineering of Italian Giotto Bizzarrini, the state-of-the-art know-how and methods of structural designers at ItalDesign, and the relentless drive for quality of engineers at BMW. This car is a testament to what this team achieved in 18 months, and proof that they would have succeeded brilliantly in their mission.