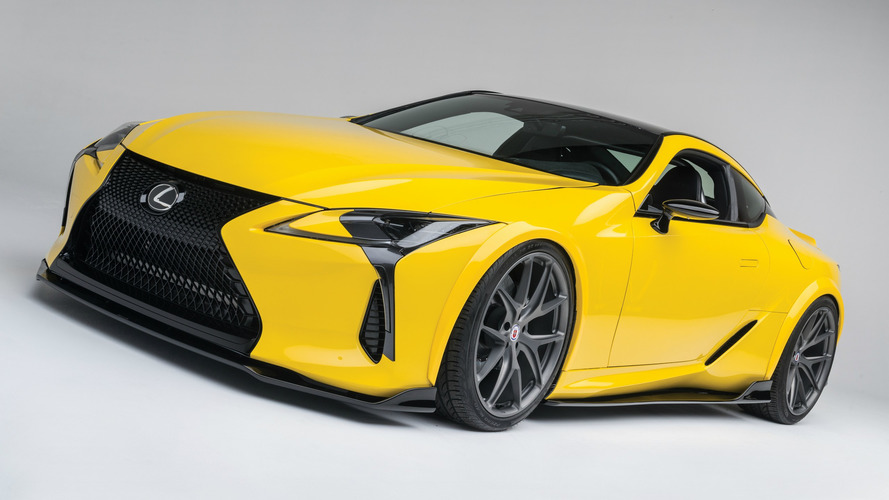 The sharp-looking coupe has arrived at SEMA with some subtle body changes and several mechanical upgrades.

The LC is arguably one of the prettiest coupes out there right now, but Lexus has teamed up with Gordon Ting/Beyond Marketing to try and make it even more beautiful. Unveiled today at SEMA, the “world’s first customized LC 500” features a slightly more aggressive body taking inspiration from race cars. While this may seem like an easy job to do, Lexus says development actually kicked off around 12 months before the LC’s debut as a production model. As a matter of fact, work began with an early development prototype.

With fender flares, beefier side skirts, rear ear wing, and prominent diffusers, the customized LC 500 brings a racy look without ruining the sharpness of the original design. The bold look is enhanced by a fresh set of 22-inch HRE wheels featuring a satin charcoal finish and wrapped in Pirelli P Zero Nero tires. Behind the massive alloys reside Brembo brake calipers color-coordinated with the new wheels.

Photos of the cabin have not been provided just yet, but Lexus says the modified LC 500 has a GT3-spec interior with a safety cage and body-hugging Sparco seats dipped in carbon fiber.

But the most important change has occurred underneath the hood where the naturally-aspirated 5.0-liter V8 of the standard car has been modified by Club DSPORT. In charge of the project was Magnus Ohlaker putting to good use his extensive 20-year experience in building engines for Formula 1 and IndyCar.

Displacement has been bumped to 5.6 liters and the cylinder bore has been enlarged as well to squeeze more power. The stock engine pushes out 471 hp (351 kW), but this stronger version delivers an extra 54 hp (40 kW) for a grand total of 525 hp (391 kW). If that’s not impressive enough, Lexus says the modified engine can actually develop more than double the stock power, so 942+ hp (702+ kW) is technically possible to extract from the 2UR-GSE engine.

As for the regular 2017 LC 500, Lexus mentions it will have it on sale in United States starting spring.

One of the major challenges presented by this first modified Lexus LC coupe was that the project started with an early developmental prototype a full year before the vehicle hit the market with zero accessory and aftermarket support.  Using a very early vehicle, Gordon Ting/Beyond Marketing were able to work with their partners to help drive development of the first body kit, performance suspension and brake kits for this new model which could be on the market in spring of 2017 when the LC goes on sale.

“The LC 500 looks beautiful and has a fantastic foundation of performance and driving characteristics,” said Gordon Ting, Beyond Marketing. “I wanted to use that groundwork to develop a high-performance, aggressive-looking LC 500 that is tough yet luxurious, and has serious chops thanks to the custom engine.”

In the LC500, the Lexus 5.0-L naturally aspirated V8 engine offers 471 horsepower and 398 lb.-ft of torque. For the modified LC 500, Club DSPORT increased the displacement to 5.6-L, and increased the cylinder bore to 99.5mm (as compared to 94mm) for 525 horsepower. Custom Moly-2000 Amphibian Sleeves from LA Sleeve were used to increase the bore size while custom CP Pistons and Carrillo connecting rods were engineered to perform up to 9,000rpm. The design, machining and assembly of the engine was done in-house at Club DSPORT’s engine development facility. The work was performed by Magnus Ohlaker, who has 20 years of experience building championship winning F1 and Indycar engines. While not exploited at this juncture, the power handling capabilities of the 2UR-GSE engine have been more than doubled.