This Chevy Camaro will make you want to play golf 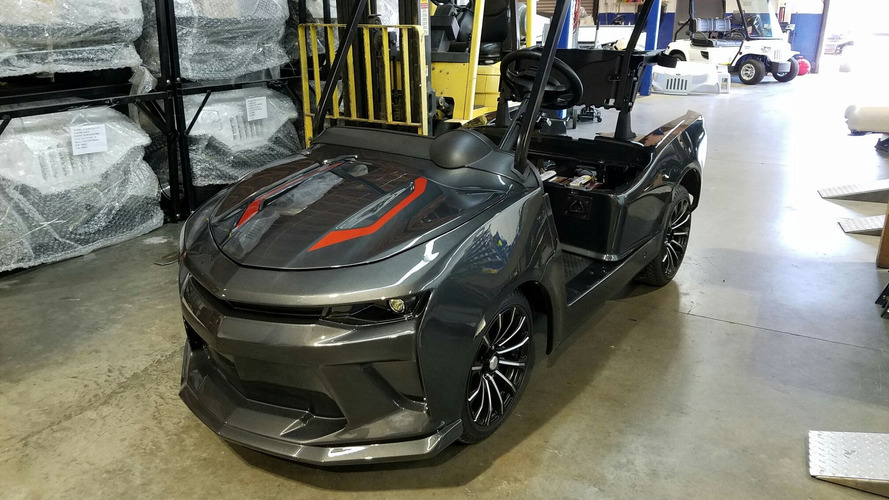 If you want to make a big splash on the golf course, there's no better way to do it than with this Camaro-styled cart.

As we are slowly but surely moving towards an electrified future, the Camaro will probably get a zero-emissions version in the distant future. Rumors of a Corvette EV are already swirling around the Internet, so it wouldn’t be too far-fetched to expect a pure electric Camaro at some point. Chevy doesn’t have one on sale today, but the peeps from Caddyshack have an electric Camaro. However, there’s a catch, as this is actually a golf cart with officially licensed Camaro styling benefiting from General Motors’ stamp of approval.

The Camaro Fifty comes fully loaded with just about everything you would want from a golf cart, including headlights, taillights, rearview mirror, and a horn. It tops out at 19.5 mph (31 kph) thanks to its 48v AC Drive electric power delivering output to those massive 14-inch wheels featuring the bowtie emblem. The scaled-down Camaro also has a removable windshield and comes bundled with a sweater basket and a golf bag attachment. It has received a PPG-painted body and canopy while the overall design wants to mimic the Camaro SS with its aggressive front fascia and prominent splitter.

If the Camaro-like styling is not your cup of tea, we have checked out Caddyshack’s website and discovered the company also has a Ford Mustang lookalike golf cart and even a beefier Shelby Cobra version together with other products that have a less splashy appearance.

You will have to give them a call to find out details about pricing, but we have to warn you these don’t come cheap. For example, the online inventory includes a 2017 Ford Mustang GT Premium golf cart available for a cool $18,995, while a 2016 Ford F-150 Raptor can be had for a hefty $15,489. Both of them are electrified, but some of the other golf cars with more conventional designs can be had with a Kawasaki gas engine.