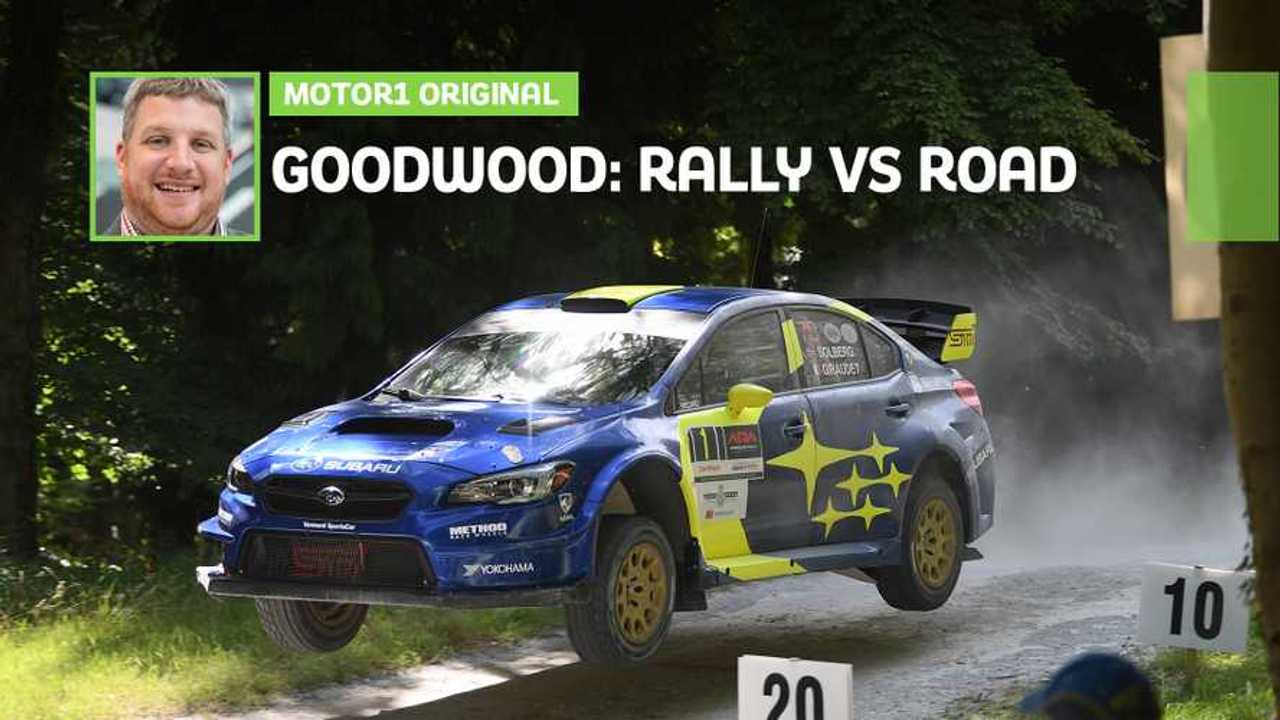 What’s better: a run up the hill or a ride around the rally stage?

The race car I'm strapped into for this test is the show-stopping Ford GT Mk II. Lighter, more powerful, and free of downforce-sapping regulations, the GT Le Mans-class-based Mk II is one of the break-out stars of the 2019 Festival of Speed. But it's not set up for the rain, and driver Scott Maxwell knows it, warning me that this demonstration sprint up the 1.16-mile hill won't be as dynamic as his outings earlier in the weekend. You know, because he can't see where he's going.

Maxwell is a slight Canadian with a splash of spikey salt-and-pepper hair. A class-winner at the 2000 24 Hours of Le Mans with Multimatic Motorsports (Ford's main partner in building the GT Mk II and its broader GT motorsports program), the 55-year-old veteran campaigns a Multimatic-backed Ford Mustang GT4 in the British GT series. The contrast with my pilot the previous day is jarring.

The only child of World Rally Champion Petter Solberg and wife Pernilla – another exceptionally gifted rally driver – Oliver Solberg is a baby-faced 17-year-old, his Scandinavian roots obvious by wavy blonde locks and the kind of pale complexion of which the glaring British sun loves to take advantage. I don't think he's ever shaved. And yet this miniature Norwegian – he can't stand more than five-foot, six-inches tall – is one of racing’s up and coming stars. If you need evidence of just how talented this youth is, check out his run in the Goodwood Festival of Speed’s shootout, where he wowed the crowd while finishing third, behind his father and Romain Dumas (driver of the all-conquering Volkswagen ID.R).

Solberg’s real talents are on the dirt, though, where he campaigns a monstrous Subaru WRX STI in the brand's iconic blue-and-gold livery. Prepped by Vermont SportsCar to compete in the Open Class in the American Rally Association's National Rally Championship, the VT19r, as it's called, has arguably less in common with the STI road car than the GT has in common with the GT Mk II. Packing 330 horsepower and 400 pound-feet of torque into an STI body isn't that crazy, but cutting the weight to a minimum of 2,900 pounds, pairing the flat-four engine with a six-speed sequential gearbox, and then swapping in various items to tighten the body and optimize the suspension for dirt makes it a monster on Goodwood's 1.5-mile rally stage.

These two drivers and their cars are going to give me a thorough look at the two biggest parts of the Goodwood Festival of Speed. While the two courses and the cars I'll be riding in them on are as different as, well, a hill climb and a rally course, they're a reminder of just how varied the Festival of Speed is.

The 1.16-mile hill starts in a tunnel of trees before bursting into daylight, with throngs of people, pavilions, and grandstands lining each side of the track. Up past Goodwood House and the annual statue that pops up each year, the course climbs aggressively following Molecomb, a tight left-hand turn that has claimed more than a few victims. From there on, it's forest running again up to the finish line.

The course, which doubles as Goodwood House's driveway, is deceptively tricky in good conditions and with reasonable visibility. Maxwell and I have neither of those things. After wriggling into the GT's surprisingly comfy passenger seat and getting belted in – for the second time that weekend, I was told “If the belts hurt, they're tight enough” – we set off in a flurry of wheelspin as the big Michelin tires struggle to hook up on the wet pavement.

Rain continues to pelt the windshield as we charge towards the first right-hand turn. Maxwell applies the brakes gingerly on entry and is even more careful with the accelerator. But despite the precipitation, the GT Mk II feels impressively sure footed as the car's twin-turbocharged 3.5-liter V6 builds power. Despite its racing roots, the Mk II's engine isn't that loud in the cabin. With just an open-faced helmet to dampen the sound, it's still decidedly quieter than the STI.

As we continue to climb, Maxwell gets a little more exuberant with the throttle. My heart skips a beat when I see our approach to Molecomb is off. Maxwell notices too and avoids dropping the driver's side front wheel onto the wet, slippery grass. We accelerate out of the turn and crest 80, before climbing through the past few sections toward the finish. An undramatic run, despite the extremely dramatic car.

Even if it were raining during my run with Oliver, I doubt it'd bother the cherubic Norwegian. Instead, it's the last of several days of brilliant sunshine and warm weather that's turned the Forest Rally Stage into a slippery dust pit. If this is even a mild inconvenience to Oliver, it doesn't show as he blasts off the line with me desperately hanging on in the ultra-snug race seat and five-point harness.

The opening section of the stage runs between hay bales that protect bystanders from the rally cars. It's narrow, and days of rally cars of all shapes and sizes have pulverized the surface into a bumpy mess that the STI completely ignores. Throughout the run, the rally car's ability to absorb massive bumps while still changing direction quickly and predictably is stunning.

Less stunning is my accidental sounding of the STI's floor-mounted horn. You can hear it in the attached video, although fortunately, you can't see the embarrassment on my face. Shortly before I stop announcing the STI's presence, we enter the rally stage's eponymous woods.

The Forest Rally Stage is a mix of straights and tight corners. Oliver has fortunately spent days running it at this point, so I'm free from having to provide pace notes. I can't really imagine how much faster the Norwegian youth would be if he had a competent co-driver – his ability is staggering, as he spends a fair chunk of the rally stage driving, flat out, with just one hand on the wheel. His right is constantly jumping to the floor-mounted shift lever and the handbrake that's next to it.

Oliver's car control seems almost telepathic as he dances the STI around the rally stage, sliding it when necessary and keeping the body collected the rest of the time. Still, he makes two small, perceptible mistakes during our run, sliding wide in one turn and losing speed while tapping the embankment in another case with the front passenger's side wheel.

No matter, though, because the STI has the power to make up for it. This car is silly quick, with the dirt tires, all-wheel drive, and sequential gearbox maximizing the effectiveness of the 330 hp and 400 lb-ft of torque on the dirt trail. Before I can even recognize that we're accelerating out of one corner, Oliver is braking for the next. At least he gave me warning before we hit the jump.

The Forest Rally Stage's modest jump is a reminder of both how fast the STI rally car is and how good its suspension is at soaking up bumps. Oliver is routinely getting all four wheels airborne and covering more than a few meters before touching down again. When that happens, the car is composed and relaxed.

Considering the conditions and its all-weather capability, it's not a surprise the STI made for a more thrilling ride. But the spin in the GT Mk II was still worth it. First, as a very small taste of what Ford's track-only, regulation-free GT is all about, but also as a reminder that just because it's wet and rainy on Goodwood's hill, there’s still plenty going on at the Duke of Richmond's estate that’s worth checking out.