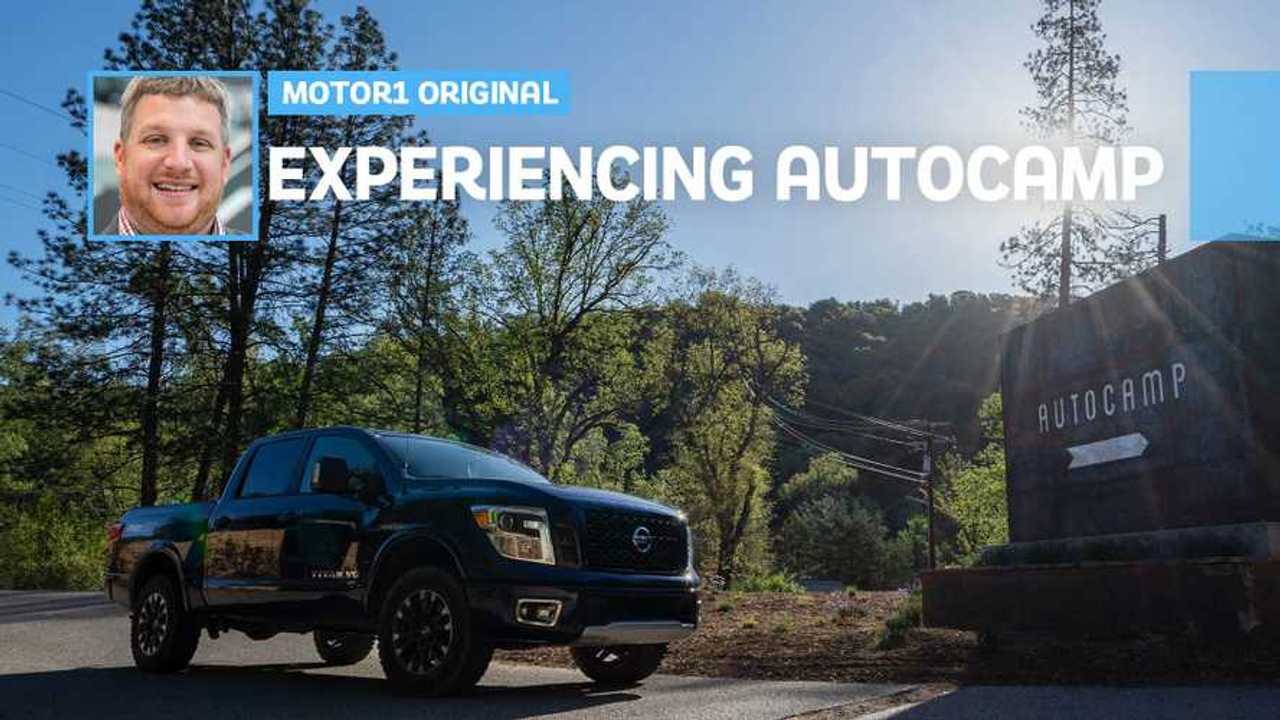 If you were ever curious about Airstream, Autocamp is the place for you.

Camping is a hassle. First, you have to air out the tent and sleeping bags, then repack everything, load the kids up, hitch a trailer if you have one, and drive over the river and through the woods. All of this just so you can sit at a boring campsite next to a lazy river in a desperate attempt to make memories. It's all dumb. But there's a better way, and it's happening in California.

AutoCamp Lets You Glamp In Style In A Chic Airstream

Autocamp is a relatively new chain of, well, for lack of a better word, hotels. But instead of a poorly decorated brick-and-mortar building, its hotel rooms are custom-designed, 30-foot Airstream trailers. No need to mess with tow vehicles, hook up to electricity once you arrive, or even haul your sewage from the trailer to the disposal area. Autocamp essentially takes the worst parts of camping out of the equation, as I found out after spending a few days at its new site that’s just a hop, skip, and a jump from California's famed Yosemite National Park.

The premise of the program, hosted by Nissan, was that I’d fly into Fresno, pick up one of the company's crossovers, trucks, or SUVs, drive to a site where I’d learn the basics of hitching and towing, and then spend two nights at Autocamp and one day traipsing around Yosemite. Basically, I’d simulate a vacation that a family with an actual Airstream might take.

Autocamp is a relatively new chain of, well, for lack of a better word, hotels. But instead of a poorly decorated brick-and-mortar building, its hotel rooms are custom-designed, 30-foot Airstream trailers.

I arrive at Fresno-Yosemite International Airport, notable for having the most amusing airport code on the planet (FAT), to find a compact Nissan Rogue waiting for me. It’s loaded with two mountain bikes on a hitch-mounted rack and a roof-top tent on, um, the roof. My two partners and I load up our luggage: three suitcases and three full-sized camera backpacks that quickly eat up the Rogue's 39.3 cubic feet of cargo volume. Admittedly, it's easy to imagine a family of four carrying less gear on a weekend outing.

It's also easy to imagine a family of four road-tripping in their Rogue. Nissan's aging compact crossover remains a likable entry, with a comfortable, spacious cabin finished in pleasant materials and loaded with smart technology. Nissan's ProPilot active safety suite takes much of the stress out of driving, although the Rogue's anemic, buzzy four-cylinder engine and the CVT it's attached to will get on the nerves of even the most relaxed driver. It constantly struggles through the hilly terrain between FAT and Autocamp, although in its defense, the roof-top tent, mountain bikes, three grown men, and fully loaded cargo hold aren't doing the Rogue any favors.

A short couple of hours later, I arrive at the Mariposa Fairgrounds, just a stone's throw from Autocamp. Nissan, Airstream, and a company called Happier Camper are all on hand for a towing walkthrough, with an Airstream International Signature, Flying Cloud, Nest, and Basecamp X attached to a Titan, Armada, NV Passenger Van, and Pathfinder, respectively. A Murano manages the adorable Happier Camper HC1, which is so small and so easy to manage I actually forgot it was back there while towing. Before I can get towing, though, one of Nissan's certified towing instructors walks me through the basics of hitching.Yes, a towing instructor.

Understandably, the folks at Nissan's Arizona Proving Grounds are quite serious about towing. Anyone that wants to take part in testing or development of the company's tow-ready vehicles must undergo an intensive three-day course covering everything from hitching a trailer to dealing with a blowout. These guys know their stuff.

Aside from towing safely, making sure the vehicle’s tow rating is right for the trailer, and actually latching everything together, the instructors take me through three short exercises. Two are easy: tow an Airstream through a short slalom course, then negotiate two tight, 90-degree right and left turns. One exercise, however, is not so simple. Hitched up to a Titan XD with the Cummins turbodiesel V8 is 30-foot Airstream. My task? Back it into a parking spot. Gulp.

The idea of getting this huge trailer into a tiny parking spot is as daunting to me as Kennedy's moonshot probably was to NASA. Reversing a trailer is basically doing the opposite, of the opposite, of the opposite of what you think is right. Even tiny inputs on the steering have an outsize effect on the alignment of the trailer. It's an infuriating process, which leaves me constantly realigning and restarting, and longing for the simplicity of Ford’s Pro Trailer Backup Assist.

Fortunately, the wide, open parking lot is the only place I have to deal with reversing a trailer. Once it’s finally in the spot, I return to Autocamp for a night around the campfire before heading to bed.

There's no shame in hitting the rack early. The Autocamp trailers are 30-foot Airstreams with mid-century modern furniture, making them a fine place to hang out. The design is proprietary to Autocamp, and the trailers are missing windows on one side for increased privacy. Based on a perusal of Airstream’s website, the layout of Autocamp’s trailer has the most in common with the flagship Classic model, even if it sleeps fewer people.

Open the door and wander in past the living area and kitchenette and there's a queen-size bed with a memory foam mattress. The comforter is plush and the pillows offer plenty of support. Despite the sheer amount that I travel (over a dozen trips in 2019, as of this writing) I've never been one to sleep well in hotels. I slept like a baby at Autocamp, though.

Part of that is down to the accommodations, but a big part is down to the climate controls. Autocamp's Airstreams come with gas- and electric-powered heaters (the former is super noisy), as well as air conditioning. And like production Airstreams, it's easy to let a breeze in with the pop-up windows. That means that whether you're staying in the winter or summer, you'll be as cool or as cozy as you want. Just don’t forget to switch on the heater – I woke up for my final day at the camp to 55-degree temps inside my Airstream.

And when you're not snoozing, the Airstream is a fine place to just, well, live. The couch in the main room comfortably seats three, while the fully equipped kitchenette has both warm and cold water. There's a microwave, a French press for coffee, an electric kettle, and plates, flatware, mugs, and cups. If you want to do some heavier duty cooking, the fire pit on the attached deck doubles as a grille – of course, there's a cast-iron skillet for that perfect camp-fired New York strip. And if you'd rather do something more than charred meat, Autocamp has an on-site shop that will save you a trip to the grocery store. While I didn’t cook, I did pop open the windows, pair my iPhone to the standard in-wall Bluetooth system, and piped some tunes out of the roof-mounted speakers while enjoying a beer on the deck.

And if you've spent a day breaking a sweat at Yosemite, the bathroom has everything you need. There's a lovely tile floor throughout and an expansive walk-in shower with plenty of hot water and ample water pressure. Autocamp includes Malin and Goetz soap, shampoo, and conditioner, along with all the bath linens you'd expect in a traditional hotel.

Nissan's line of tow-capable vehicles is worth taking seriously.

So yes, Autocamp will take all the hard parts out of Airstream ownership. But what if you like a little pain? What if you enjoy the torture of trying to reverse a 30-foot camper into a parking spot, or owning a vehicle simply because of how much it can tow? Is that tolerable? Is that worth it?

And the answer to that question is simply, “It depends.” After crawling around the assembled Airstreams at Nissan's towing clinic (not to mention the simply adorable Happier Camper), I get the appeal. From the tiny Basecamp (which I, no joke, texted my wife and suggested we consider buying) to the hefty International Signature, the Airstream way of camping is a vast improvement on the pop-up campers I grew up with.

At the same time, Nissan's line of tow-capable vehicles is worth taking seriously. The family-friendly Pathfinder is all it takes to handle the two-person Basecamp, while the Titan and Titan XD can easily manage the bigger offerings (especially with the available Cummins turbodiesel).

Or, you can simply pass on the hassle and stay at an Autocamp. There are only three of them at the moment (the Russian River near Napa, the Yosemite location, and a spot in Santa Barbara), but as a way to dip your toe in the Airstream lifestyle, there are few better ways to enjoy the great outdoors.