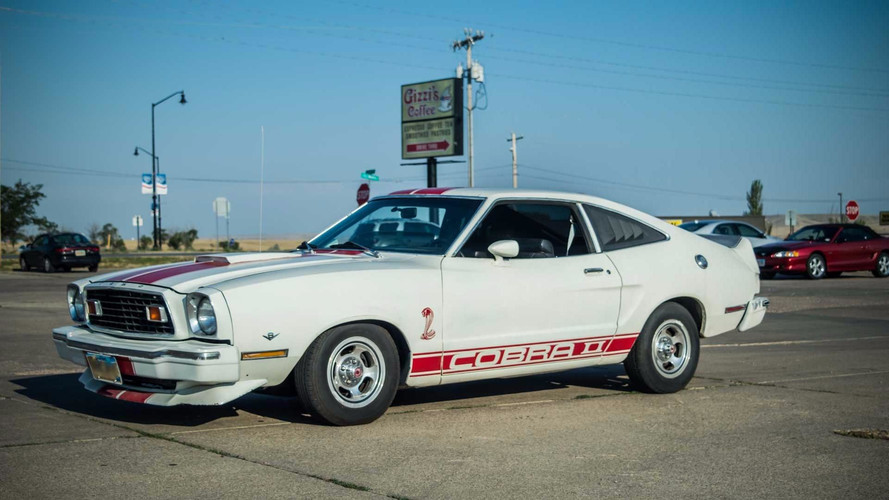 I almost bought this 1977 Mustang Cobra II and I’m not ashamed to admit it. Mostly.

I’ll freely admit to being a Ford Mustang fan, having owned three of them to date. I can’t say acquiring a Mustang II has been a lifelong goal but I’ve always been a sucker for things shunned by the masses, which is at least partly why I came damn close to buying this 1977 Cobra II a few weeks back.

The other part is that I simply love how these cars look, and I’m not ashamed to say it. The standard models are so-so, but the Cobra IIs and King Cobras with the window louvers, massive chin spoilers, stripes, and flamboyant graphics are pure 1970’s awesome. And I know there are other Mustang II fans out there, because Ford sold 1.1 million of these cars from 1974 through 1978.

Plus, Mustang IIs don’t have nearly the same appetite for people as the other generations. So when this particular Cobra showed up in my South Dakota neighborhood for $4,000 I was morally obligated to at least check it out.

Should you find my bold affirmation of Mustang II appreciation inspiring enough to begin your own quest for the most hated Mustang of them all, here’s what you need to know.

$4,000 is the going rate for a decent rust-free Cobra II that needs a bit of work but runs well. The key words here are rust free because these cars – like many in the 1970s – would turn to dust at the mere thought of salty roads or ocean air. Replacement body panels aren’t as easy to come by as other ‘70’s rides like the Chevrolet Camaro and Pontiac Trans Am, so a thorough examination for rust or signs of body work should be your starting point. Pay attention to trouble spots under the doors, rear quarter panels, hood scoops, and under the rear hatch for fastback models. Wavy urethane bumpers are also a sure sign the steel underneath is a rusty mess.

Things are a bit more forgiving on the mechanical side. The 5.0-liter V8 is basically the same mill that powered Ford vehicles for decades, so parts and upgrades are both plentiful and cheap. In stock trim the engine is good for about 120 low-revving horsepower, but with $1,000 in mods that same V8 can make over 300 ponies, which is plenty for a 2,700-pound car. Don’t bother with the four-banger or V6 variants. Seriously, you’ll already have your hands full explaining why you bought a Mustang II to begin with.

The Cobra II and King Cobra models are certainly the most desirable of the bunch, and since they were strictly appearance packages, they’re easy to clone. If you want the real deal, look on the radiator support for a body tag that has the letters CB. Aside from the graphics, Cobras should also have front and rear spoilers as well as window louvers. The seller of this car said it had been damaged in shipping when he bought it, hence the replacement rear hatch with no louver. Then again, the seller also said it was rust free. He had a very interesting interpretation of rust free.

Obviously I didn’t buy this Cobra II. Aside from the rust there was a worrying slip in the automatic transmission, an undisclosed fuel leak, and it wore a positively terrible paint job that I suspect was hiding more body filler than a Kardashian family reunion, especially in the rear quarter panels. He came down to $3,000 but it was just way to sketchy for me to be comfortable at even half the price.

However, there is an interesting takeaway here. Now that I’ve actually driven the worst Mustang of all time I was legitimately surprised to find it was fun to toss around, even with the neutered V8 and old-school suspension wallowing through corners. It felt modestly nimble and willing to play – dare I say not entirely unlike an old MG or Triumph Spitfire, albeit with a solid roof and wide hips. Naysayers love to trash this car, but for all its failings this Mustang Cobra II showed me something I did not expect to find – an endearing character. Endearing? In a Mustang II? Maybe that’s why Ford sold over a million of these things.