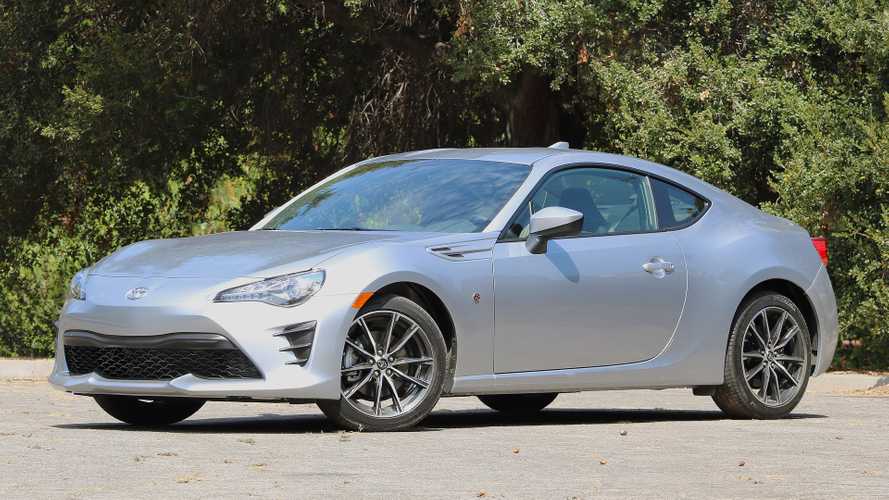 The plucky sports coupe grows up without losing an ounce of fun.

As you head north from the sleepy, 7,500-resident town of Ojai on California State Route 33, the road turns into something out of a Gran Turismo fantasy. It whips left and right as it climbs up into the mountains, epic views of the valley just beyond the guardrail-free cliffs. There are off-camber and blind corners, sweeping high-speed bends and hairpins, tunnels filled with howls of exhaust, and dirt look-out points for when you need to take a break from the action and admire the scenic vista. It is the perfect test track for the 2017 Toyota 86.

The 86 is the Scion FR-S grown up. The Scion brand is dead, so the 2+2 car will now be sold as a Toyota in the U.S. It’s already a Toyota overseas, with a name that evokes both the classic AE86 coupe and the engine’s bore and stroke in millimeters. As it switches brands, the 86 also gets a redesign (just like its mechanical sibling, the Subaru BRZ). Highlights include a fresh suspension tune, engine revisions, and a visual facelift. Running up and down Route 33 confirms that all those tweaks have only served to make Toyota’s rear-wheel-drive sports car more fun than ever.

It tracks smoothly and confidently, with far fewer abrupt body motions when you dial in steering input.

The suspension modifications are intended to make the car feel a little less skittish. The front spring rates are higher and the rears are lower, the rear anti-roll bar is one-millimeter thicker than before, and the shock absorbers have been retuned for more comfortable, more progressive damping. There’s also a lot more chassis bracing, notably to beef up the mounts for the strut-tower brace and rear shocks, as well as around the transmission tunnel. All this hasn’t turned the 86 into an understeering dullard, but rather tamed the FR-S’s proclivity to fidget and bounce and bang over the road. It tracks smoothly and confidently, with far fewer abrupt body motions when you dial in steering input.

Push the 86 through corners and it takes a solid, stable set, with predictable and modest amounts of roll and dive. The steering weights up progressively as you dial in more speed and angle, without any dartiness off-center. Looking through corners and trusting the relatively skinny tires, you can easily position the car and carry big speed on a rippling back road. It’s just plain fun, and far easier to manage than the old FR-S’s slippy-slidey nature. Best of all, newfound ride composure will no longer annoy your girlfriend (75 percent of Scion FR-S buyers were dudes), with the new car far less prone to slamming over potholes and speed bumps.

Weight gain compared to last year’s stick-shift FR-S is a negligible 16 pounds. The tire choices are unchanged, with Michelin Primacy HP summers as standard and Bridgestone Turanza EL400 all-seasons a no-cost dealer option. Grip on the former is best described as great but not heroic, though that suits this car’s purist, feedback-first driving focus.

The engine tweaks are somewhat less transformative. If you get the manual transmission, which you should, the FA20 flat-four engine gets an extra 5 horsepower and 4 pound-feet of torque, for totals of 205 hp and 156 lb-ft. The changes were achieved through a freer-flowing intake and exhaust, various internal friction reductions, a new intake manifold, and other supporting tweaks.

As ever, this engine is a little lazy down low. The new tuning eliminates the massive 3,000-4,000-rpm dead spot like in the old FR-S, but there’s still no-one home below 5,000 rpm. Around town, Toyota’s 2.0-liter lacks the verve and sizzle of the Mazda MX-5 Miata’s (admittedly less powerful overall) Skyactiv engine. Fortunately, more revs are easy to find; the snick-snick six-speed manual is smoother than I remember, and the three drilled-metal pedals remain ideally set up for quick heel-toe work.

Run the tach up high and there’s plenty of power on tap as the engine comes alive and scurries toward redline. The manual 86 now has a shorter final-drive ratio, further amplifying acceleration, and there’s no denying that it’s a plenty quick when you use all of the revs. But with peak torque arriving at 6,400 rpm, peak horsepower at 7,000 rpm, and the redline at 7,400 rpm, it’s hard to keep the engine on the boil unless you’re driving like a madman. At nine-tenths driving, it’s a riot; at five-tenths it feels like a 140-hp car, not a 205-hp one.

If you choose the automatic transmission, you get the old engine without any changes (200 hp and 151 lb-ft). I drove one and it was fine, especially when you use the paddle shifters, but I’d recommend a slushbox 86 about as much as I’d recommend eating kale for every meal.

While the mechanical changes are the things that get enthusiast drivers like me excited, the 2017 Toyota 86 also gets a significant visual overhaul. That starts with, obviously, Toyota badges instead of Scion ones, as well as the deletion of any model designation from the trunk lid. Up front, a new, wider grille opening spans almost the entire width of the fascia, with skinny LED headlights nestled in the corners of the sloping hood. There are new designs for the fender insert pieces, plus little round “86” badges ahead of the front doors. Around back, Toyota says the restyled plastic lower diffuser reduces aerodynamic lift, and the taillights switch to standard LEDs.

Though the new look doesn’t really excite me in photos, it’s striking in person. As ever, the 86’s low-slung bodywork is cool, sporty, and different. I especially like the contrast between the Halo white paint (a $395 option) and the restyled twisted-spoke 17-inch wheels. Perhaps it’s because I’m right in this car’s target demographic, but I’d be happy to have a white 86 parked in my driveway.

Gone are the Scion’s abundant red accents, in favor of a black-and-gray color scheme.

Move inside, and the theme again is maturity. Gone are the Scion’s abundant red accents, in favor of a black-and-gray color scheme. The dashboard now has a one-piece design without the obvious gap and cut in the trim near the passenger airbag. An Alcantara-like Granlux material on the dash and door panels feels great, looks more expensive than the old model’s plastics, and helps reduce glare on sunny days. The standard seven-inch touchscreen isn’t pretty and has few flashy functions, but it’ll serve fine for playing music and making phone calls via Bluetooth.

The leather-wrapped steering wheel is three-millimeters narrower in diameter than before, making it the smallest wheel on any production Toyota, but it still feels great to hold. Coupled with the Toyota’s super-quick steering ratio, it brings to mind that awful cliche about go-kart-like steering… Notably, the new wheel also has audio controls on its left side. When the Scion FR-S launched, Toyota was adamant that enthusiast drivers didn’t want any distractions from driving; now officials admit customers kept asking for an easier way to change the station and volume.

Above all, though, the Toyota’s interior excels in its positioning of the driver and the primary controls. The cloth seats are just snug enough to hold you in place without being a chore to get in and out; the pedals, steering wheel, and shifter are so ideally placed, they feel like the car was custom-molded to my body. It’s still not a glamorous or fancy cabin, the back seats are essentially worthless for anything but carrying luggage, and over-your-shoulder blindspots are big. But for driving enthusiastically, the 86 is great.

Despite growing up and maturing in subtle ways, the Toyota 86 still excels at what it has always done best: delivering great driving thrills for a very low price.

There are some obvious omissions when it comes to equipment. Like the Scion version, the 86 is sold in just one trim level, so you can’t have push-button start, auto climate control, heated seats, or leather seats. The standard infotainment system doesn’t have Apple CarPlay or Android Auto, and navigation is a $900 option. (It also doesn’t have a CD player, but who will really miss that?) Those don’t sound like horrible omissions in an affordable sports car until you note that the Subaru BRZ offers all those features as options; Toyota product planners hint future special-edition 86s, like the various Release Series FR-S coupes offered in the past, could have more of those luxury goodies.

Yet as the day winds down, I don’t really care about which switches are or are not present. I just want to thrash the car down a few more miles of twisty roads. Despite growing up and maturing in subtle ways, the Toyota 86 still excels at what it has always done best: delivering great driving thrills for a very low price. For less than $30,000, you can have a rear-wheel-drive sports coupe with nimble handling, a high-revving engine, and aggressive styling. It’s a pretty great deal.