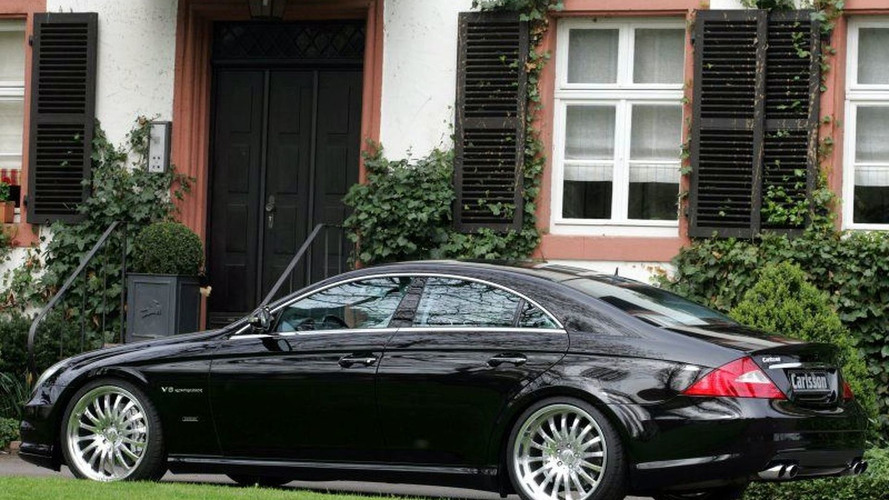 ...our car came decked out with an interior that makes P Diddy's wardrobe look a little drab, but it looks better than it sounds.

High speeds may be legal on the German Autobahns, but it's still a pretty satisfying moment riding up to the back of a police bike at 140mph and blasting him out the way with a sheer wall of noise. My co-conspirator, Stefan Mueller of Carlsson, even suggested cheeky use of the left-hand indicator.

You can do these kind of things in the almighty Carlsson CK55, a 570bhp, blown out version of the already preposterously powerful CLS 55 AMG. It feels good hammering down the outside lane in the upper reaches of a 200mph car's performance envelope, but it doesn't feel entirely natural when the police are clearly in sight.

Once past and back on the power, this car's true strengths came to the fore: Stefan reckons it sounds like a T-Rex, and he's got a point. The noise from the bonnet is saturated in brute strength, not sophistication, this car is the proverbial iron fist of an engine, wrapped in a padded velvet glove.

This car is just stretching its legs at the old car's artificially induced 155mph top end and will now scorch all the way to 200mph without trouble, barging police out the way at every opportunity. The figures belong to a top end Ferrari or Lamborghini, which is a truly monumental achievement for a 1920kg car with sofas instead of seats and the quiet, regal air of a gentleman's club.

With a 470bhp engine to start with, Carlsson was always going to produce a monster. Carlsson Director, Rolf Hartge and his devoted followers have coaxed 560 horses out the 5.5-litre V8 under the hood thanks to an increased compression ratio, reprogrammed ECU and, crucially, a V-Max delimiter.

It hammers through the 60mph barrier in a contemptuous 4.5s and doesn't tail off in the mid range. The sonorous V8 simply takes on a deeper, more aggressive rumble, like an approaching storm breaching the thick layers of sound insulation.

The sheer savagery of this machine is undeniable. Stand on the gas pedal and the car will inch very slowly forward, while laying down thick black lines and a cloud of acrid white smoke courtesy of what used to be 20" Dunlop SP Sport Maxx tyres. You can't disable the electronics completely, which is a frustration in corners when the big barge starts understeering. But on the standing start the nanny state computer can be completely overpowered by slamming on the loud pedal to the plush carpet.

It will do the same thing if you let loose anywhere under 100mph and the pure excess of power is verging on the ridiculous. Any car with 597 lb/ft of torque should come with a health warning, especially in combination with AMG's screw-type supercharger that Carlsson thinks is a little savage. They have developed a Wankel-licenced number for their CLS 500, that they think smoothes out the savage spike in power, but that will have to wait for next time.

Stefan loves this car's mixture of performance and comfort and although the company wanted to sharpen the CLS's edges, they couldn't sacrifice comfort. This is a car executives want to keep themselves in armchair luxury as they waft down the outside lane until Europe runs out of road. Long distances and high speeds make their own demands on the chassis and Carlsson has found a near-perfect solution.

Carlsson's C-Tronic system drops the car's air suspension by 30mm. On cut up roads, though, it will sense those pesky vibrations and ripples in the lake that is the CLS' ride and obediently lift to a comfort setting. Carlsson has done a good job of trimming the fat, but this isn't a slinky sportscar, it's a big Autobahn crushing status symbol with more torque than a battleship.

That means you need to brake early, go in slow and use the oceanic power out of the bend. Go in hot and the pads will overheat and that heavy front end will drag the whole car wide anyway, before the electronics cut in to keep you from the nearest hedge. So it's not a car for blasts round country lanes, it's a high speed personal express train.

As for the cosmetics, our car came decked out with an interior that makes P Diddy's wardrobe look a little drab, but it looks better than it sounds. Quilted leather and Alcantara seats, a Carlsson sports steering wheel and a high gloss varnish liberally spread around the standard trim actually looks cool in the flesh although I admit that it sounds only marginally more elegant than a rhino on ice skates.

The speedo is by far the sexiest thing in the cabin, though, as it now reads 360kph (225mph), which suggests the quoted top end speed might even be a little conservative.

Outside, it's a little more muted. Rolf Hartge loves insanely fast cars and opulent interiors, but he clearly doesn't approve of big wings and other headache inducing cosmetics on the outside.

A subtle rear wing adjustment and front lip spoiler that should serve a purpose and prevent front-end lift at speed are the only real annotation on offer, except for the mighty 20" Ultra Light forged wheels that turn into mirrors at speed, and that medallion of a logo on the front end that the car could do without. A straight-cut grille is an option, and would be well worth discussing.

The whole kit costs about ÃƒÆ’Ã‚Â¢ÃƒÂ¢Ã¢â€šÂ¬Ã…Â¡Ãƒâ€šÃ‚Â¬28,000 on top of the standard car, so it's a sizeable wedge of cash, but anyone who can afford to buy and run an AMG Merc of this stature in the first place is unlikely to be frightened off by such things.

In truth the CLS55 AMG is a rolling contradiction. The power is too much for the chassis, and the car is so heavy that it's still slow in bends and on a track or hard run the brakes can burn faster than an Englishman on holiday. It's also a long-distance cruiser that uses fuel like a private jet. It's a two-tonne sportscar with four comfortable seats, an automatic gearbox and a tendency towards understeer. Love is easier to rationalise.

And Carlsson's modifications have done little to make sense of the madness, but this version of the sleek four-door coupe is so utterly insane that the necessity of the machine doesn't matter any more. Now we're just thankful it's there and those executives and entrepreneurs that want to show the world just how well they're doing continue to buy them.

Carlsson has added the finishing touches to Mercedes' most daring design for years. And as he was blasted from my path, even that policeman couldn't help but be impressed.