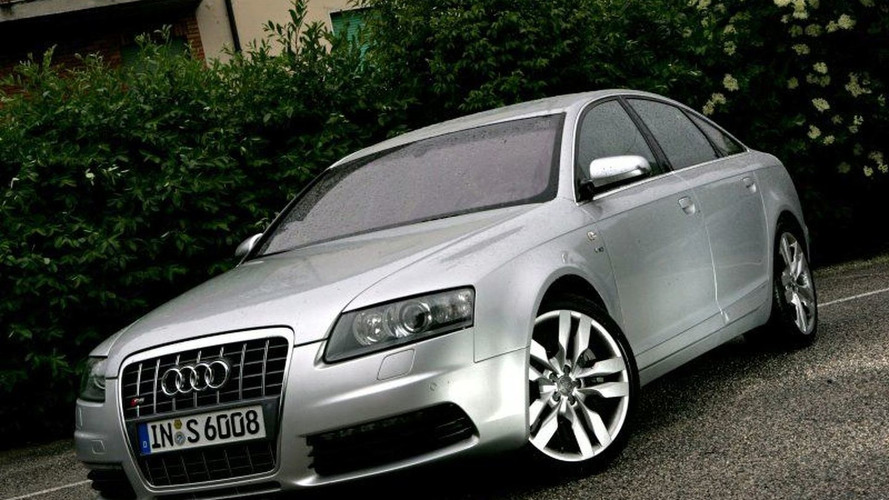 It was a bizarre feeling lining up for the next checkpoint, the media pass atop the Audi giving us access to the full route, the crowds touching the car, taking pictures, begging us to rev the engine and feigning orgasm when we did.

The truck driver coming the other way was convinced: we were going to die. Headlights ablaze and horn blazing, just in case the ever larger wall of metal wasn’t enough of an indicator to get out of the way, he was still gesticulating long after I had dropped two cogs on the new Audi S6, hooked into the powerband, blasted past the three cars in my path and disappeared round the next bend.

Now such driving is not big or clever, but there were extenuating circumstances. This was the Mille Miglia, I had been chasing the DKW Monza disappearing round the next bend for the past two hours for one picture and nothing, nothing was going to get in the way.

It’s a crazy event, but earned its name ‘The Beautiful Race’ back at its inception in 1927 when two Brescian noblemen decided to race the train to Rome. What followed was 30 years of carnage, from the highs of Stirling Moss’s legendary win in 1955 and Alfonso de Portago’s crash that killed him and 11 spectators just two years later. The 1000-mile event was cancelled for safety reasons and revived as a classic car rally in 1977 with 375 cars aiming to hit predicted times, rather than walls.

But don’t for a second think it isn’t dangerous. Stages were cancelled on the final day after a massive accident.

Priceless classics, modern-day supercars and the support cast all dice for position in one direction, while the general public comes the opposite way. And the crowds got so close, urging us on along with the spectators, that the cobbled streets of Verona looked nothing more than a World Rally-style tunnel of people as Alex Zanardi’s 1957 BMW 507 disappeared ahead.

Yes, really, we were chasing Zanardi and even Juan Manuel Fangio’s Mercedes 300 SLR from ’55. It was a crazy few days, and staring down a truck to make up the gap had all become fair game by then.

The police are ever present, to wave the rally through red lights, encourage law breaking activity at any given opportunity and potentially to sweep Audi drivers and trucks off the tarmac.

But the other guy was wrong, there was more than enough space to make that move. There generally is when you have a 5.2-litre Lamborghini-sourced V10 under the bonnet. This is the same engine that features in the S8, and it’s a peach.

It may ‘only’ boast 435bhp, compared to the Gallardo’s 500, but then it has 398lb/ft of torque, which is good because it weighs 1910kg. That’s almost 150kg heavier than BMW’s M5, and that wasn’t light, so this car has to come loaded with tricks to conceal its girth. And it does.

Despite weighing the same as a small moon, the S6 scorches to 60mph in 5.2s and the acceleration is fierce all the way to 155mph – all to the soundtrack of that sexy V10. Of course it’s not so loud at low revs, but slam on the gas, the valves open and this beast lets fly so hard the dogs of war would cower in fear. You need to rev it towards the 7000rpm red line, but at the top end of its powerband this car is a fiend.

It was a bizarre feeling lining up for the next checkpoint, the media pass atop the Audi giving us access to the full route, the crowds touching the car, taking pictures, begging us to rev the engine and feigning orgasm when we did. Girls even gave us the eye.

This car, seriously, has more pulling power than Porsche. That’s not a claim anyone can make lightly, but it really was true on Italian soil at the very least.

Maybe it was the novelty factor, this was a car-loving audience and they hadn’t seen the S6 in the flesh. Purposefully sold as an athletic design without a hint of aggression, the S6 still has something of the night about it thanks to those LED lights in the front spoiler.

A bit bling they may be, and that flies in the face of Audi’s conservative design philosophy that has won fans around the world and helped them take a hefty market share. But still, in the pale moonlight, those lights are wicked bad.

As is the carbon-fibre kit that adds a splitter, inserts under those mood lights and a rear apron Flared wheel arches, that V10 badge and more jewels with the five-spoke wheels mark it out as special. But it’s still a big, solid car that could have been hewn from granite, a dependable, well-engineered machine, that just happens to be fun to drive.

We’re talking degrees of relativity, this is never going to be a 911 beater on the entertainment stakes, buts it was an eyebrow-raising surprise every time this car took a corner for the first day. Then you just kind of knew the car would take whatever corner lay in front, at whatever speed was on the clock.

You can feel the wheels scrabbling for traction in the slower corners, sharing the load and somehow pulling this giant barge through at speeds that would embarrass many a sportscar – and did.

On the high-speed bend it feels planted like a Redwood. A quick tug to load up the tyres seemed to help, but then set the car into the corner and it will hold it, flat and hard.

That suspension system is just firm enough to provide a sure foot at slightly more than the suggested 155mph limiter on a sweeping Autostrada, just for a while, to see what it felt like, and to coast over cobbled, quaint, Italian streets, yet soft enough to soak it all up.

And while some racers of yesteryear were forced to spend 1000 miles arm-in-arm to prevent falling out of the unprotected sides and suffering sunburn on bald heads, we had it easy. Those Alcantara and leather seats really are as good as they look, the SatNav got us through most crises, despite sending us down single-track roads in search of a new motorway, and all the controls are as logical as they will ever be on a system of this ilk.

So, unlike BMW’s M5, it can cruise in automatic mode. Yes it’s another clever semi-automatic gearbox, but this one really works. There are just four combos: soft and hard and manual or automatic. But you won’t even need that many.

A six-speed Tiptronic is a far simpler solution than some of its nearest rivals have come up with, but it’s mighty effective. The soft automatic is velvet smooth and the hardcore manual feels instant, just savage enough to spur you on and devastatingly effective. The middle ground is a nonsense, I either wanted to go fast or slow.

Sometimes on the Miglia, in an aborted move or a flying run into the hole after jerking out of traffic, past a slower car and almost into the back of something that cost several lifetime’s of journalist’s wages, the brakes got a monumental workout, too.

They were certainly big enough, at 385mm for the fronts and 330mm at the rear with an S6 logo winking through the front wheels. The stopping power for a car this heavy is outrageous and there’s more technology at work preventing the car diving on its nose as the anchors seemingly bite into the road. The pads didn’t far so well and the pedal was distinctly soggy on the final day, but then they did the Mille Miglia, they went to hell and back.

So did we, but it was an almighty experience. I bet that truck driver thinks so too.