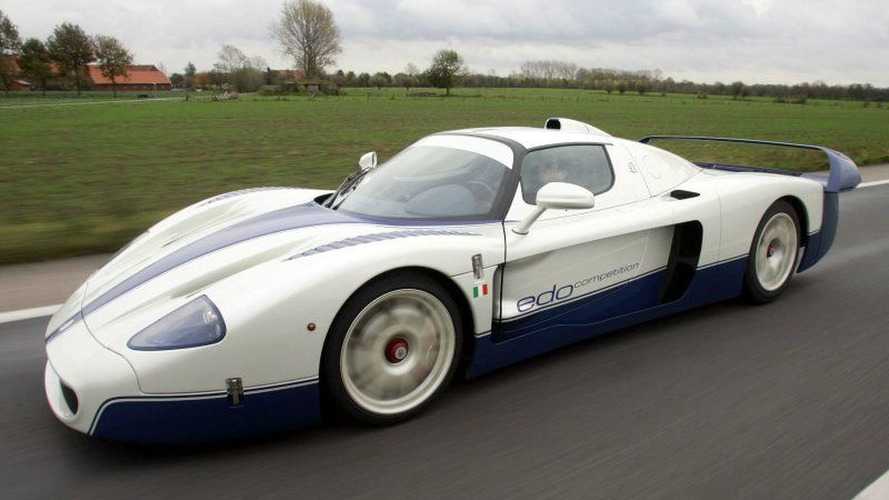 "Only the doors and the windows were right, everything else was absolute shit," was Edo Karabegovic's colourful assessment of one of the most desirable cars in the world.

Now €600,000 should buy a never-ending, dessert-sized slice of perfection. Especially when that curvaceous beauty is the Maserati MC12, good for 205mph, infinitely cooler than the Ferrari Enzo and more exclusive than Madonna’s wedding.

Well you’d be wrong. All you’ve really got is an overpriced afterthought, a street-legal cast-off from and part-funding for the racing programme.

“Only the doors and the windows were right, everything else was absolute shit,” was Edo Karabegovic’s colourful assessment of one of the most desirable cars in the world. And that mattered to one man who paid this German to rip apart one of the most disappointing supercars of recent years and make it a winner.

There’s only going to be 50, ever, and most will go straight to underground garage collections. The MC12 has gone beyond a car into the realm of four-wheeled art; so they can charge what they like and the closest most will get to exploiting its full performance is reading the spec sheet to their friends.

That changed when Edo Competition received an order to pick up an MC12 direct from the factory, without the new owner even driving it first, and turn it in into an Enzo beater. Edo is a race engineer turned tuner who won the Tuner Grand Prix and then set the record for street legal cars to lap the Nordschleife.

Porsches are his stock in trade, but he has taken care of Lamborghinis, Ferraris and more or less everything else. For complete projects on exotic machines, this is the man to go to.

With the Maserati, his brief was simple: “Do what you want! You have four weeks!”

And when asked if a random journalist could take his car for 100km of running, far more than some cars have moved in their entire lives, the largest wholesaler of solar panels simply gave the thumbs up and I was on the way. Sir, we are in your debt.

As an endurance racing car first and foremost the MC12 was fitted with steel brakes, long aerodynamically honed bodywork that suited the track but not the road, low down torque rather than high end revs and Pirelli P Zeros in a deferential nod to its on-track partner.

There was another unspoken truth as well. Despite borrowing the chassis, powerplant and gearbox from the Ferrari Enzo, the MC12 road car would never be allowed to outdo it.

So the six-litre V12 was bridled at 630bhp, the rev ceiling pegged at 7700rpm, a full 500rpm short of the Enzo’s redline. Someone drugged the MC12, and the Prancing Horse was up against a donkey. Now before I come across all spoilt, an MC12 in isolation is still enough to make most grown men wet themselves with excitement – me included – but putting it head-to-head with its nearest rival is like going to war in Iraq armed with a pool ball in a sock.

“Steel brakes for this car are absolutely ridiculous,” he said. “The tyres, the brakes, the engine, it was all horrible.”

His first job was to persuade one unnamed company who still fears retribution from Maserati to produce the €4000, 396mm ceramic brake discs that work with the standard callipers that now sit just 3mm off the 19” alloy wheels. As soon as the sharper stoppers were on another problem became apparent: the P-Zeros could not translate their power to the road.

Lock-ups became a way of life until Edo could con a set of Bridgestone Scuderias for the Enzo out of Ferrari. “Without a doubt this was the biggest change I made to the car, we put new tyres on it and suddenly it was so much quicker,” said Edo, who could have taken far more of the credit for himself.

Still, with the new brakes and tyres, the MC12R comes close to pulling your face off with a firm push on the brake. Touching the middle pedal was enough for general road use, braking with a hard stare is surely the next step.

He singled out the fixed suspension system for serious abuse, too, as the car skipped like a broken record at 300kph on his first tests. His good friends at K&W provided a fully adjustable set-up to replace the original and suddenly the gentle understeer other journalists reported on the epic six laps they were granted at the international launch was gone. Edo had set the car up with three degrees of negative camber for a track test the following day.

The MC12R turned in like a heated scalpel and I frantically wound lock off on the way to the apex more than once as the €34,000 nose section headed towards the inside kerb. Lots of cars feel direct, but there are degrees of relativity at work and this is the sharpest car I’ve ever seen.

This machine commanded constant focus. Not just because it belonged to someone else and a panel cost the same as a decent roadster, but it can hit triple figures in a heartbeat and change direction with only the mildest touch. Greasy road conditions kept the traction control busy, but even at 60 per cent of its potential this car is still ballistic.

Edo nudged 180mph before the local police, who know him well for some reason, suggested he slow down and it was clear to see even from this demonstration that this elegant white express train has sharpened its act.

The engine zips up to 8500rpm with the gentlest stab of right foot and instantaneous flat-shift gearchanges are available from the stubby paddles that Ferrari and Maserati have perfected. It’s the only way to keep pace with the engine and a tri-pedal would always leave the driver playing catch-up, this was the first time I’ve ever truly welcomed a semi-automatic and I couldn’t blink that fast, let alone change up.

This car has roughly 700bhp and a good deal more torque than the 480lb ft offered by the standard MC12, enough to reduce the 0-60mph beneath 3.5s and take the top end to a comfortable 235mph. With 10 minutes of hardcore revs Edo thinks he can crack 400kph (248.5mph) too, although he admits that the engine will eventually melt.

A quick hack into the electronics raised the rev limit, but with a semi-automatic that brings its own problems and Edo then had to reprogramme the gearbox settings to prevent the extra torque perpetually forcing the car into a higher gear.

By fitting engorged vents at the front and feeding more air into the engine, the German produced a partial Ram Air effect that boosts power at the top end.

He needed a new exhaust, too. “When I first drove the car it sounded like a Nissan Primera,” said Edo, who may have been exaggerating just a touch. “The old exhaust was 28kg, my replacement was seven!”

And his has a cool addition to the weight saving and extra power, too. A set of bypass valves opens at the touch of a button on the keyfob, too, which turns a fine-tuned Tenor into the incredible hulk.

The noise level isn’t quite legal on full-bore settings, but the owner can probably handle the fine and you could fill an iPod with that glorious, unbridled, harmonic V12 engine given its full head. It might have a Trident on the cover, but this is Ferrari’s finest road car engine through an even better exhaust. It’s a high-pitched F1-esque noise in full flight, and one of the best sounds in the motoring world.

And the owner has clearly been seduced. Many of these cars get pushed more than they’re driven. This one has covered 5000km in three months and serves as his daily driver. Seeing as this man has a fleet of cars to make the Chelsea first team jealous, the MC12R is clearly beyond special.

It’s still not the simplest thing to manoeuvre round town, that bodywork is long and designed for high-speed cornering, not a three-point turn in the high street. Still, when the aerodynamic assistance at the top end kicks in, such matters pale into insignificance.

It’s going to get better, too, Edo has set to work stripping the interior and removing 150kg from the kerbweight, plus he’s creating a racing rear wing. So it will corner even better, accelerate even faster and stop quicker. An Enzo beater? You bet…

Michael Schumacher signed the door of this particular car after giving it a quick run. Given a second drive, though, he’d be a lot more impressed.