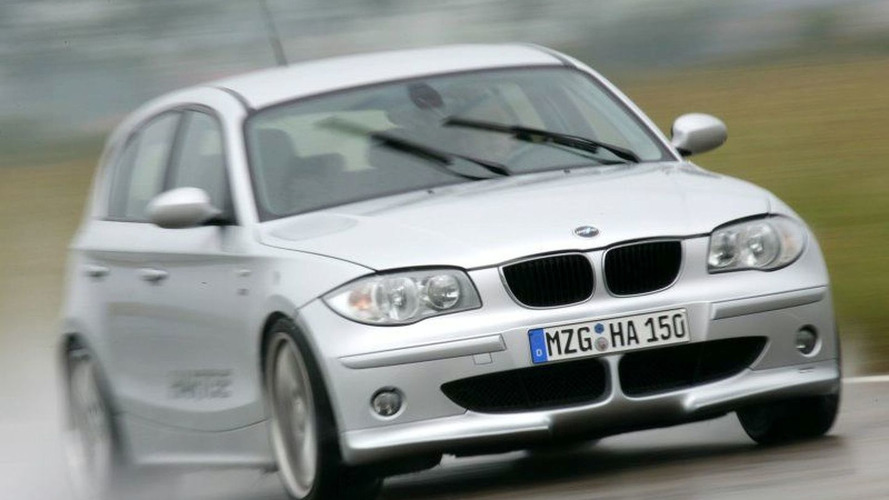 However you want to justify it, ÃƒÆ’Ã‚Â¢ÃƒÂ¢Ã¢â€šÂ¬Ã…Â¡Ãƒâ€šÃ‚Â¬100,000 is a Hell of a lot of money for something that looks ostensibly like a BMW 1 Series. But get beneath the bread van exterior and this is truly one of the world's most entertaining cars

However you want to justify it, ÃƒÆ’Ã‚Â¢ÃƒÂ¢Ã¢â€šÂ¬Ã…Â¡Ãƒâ€šÃ‚Â¬100,000 is a Hell of a lot of money for something that looks ostensibly like a BMW 1 Series. But get beneath the bread van exterior and this is truly one of the world's most entertaining cars.

See the subtle V8 badges on the sides? Yes, really, this 1 Series BMW is powered by the five-litre powerplant from the E39 M5 - thank the Lord for the likes of Hartge Engineering. They've specialised in cramming large BMW engines into small cars since the 1970s and this was one of their craziest conversions to date. Looked at another way, however, it makes perfect sense.

The H1 is just 20cm longer than the almighty Z3M Coupe, 1cm wider, weighs 20kg less at 1445kg and boasts more than 130 extra horses. It is also set up for pure performance, rather than the usable and comfortable supercar that BMW had to produce. So really this is the spiritual successor to one of the greatest driver's cars of years gone by, albeit a costly one.

Of course it goes well beyond jamming an engine in the bay, this is a complete rework of the 1 Series and comes with full Hartge H1 registration plates. This is not And for the ÃƒÆ’Ã‚Â¢ÃƒÂ¢Ã¢â€šÂ¬Ã…Â¡Ãƒâ€šÃ‚Â¬70,000+ price tag you can drive a dismal 116 on to the forecourt and erupt off in a snarling, vicious animal.

The V8 under the bonnet rumbles into life with a menace that just doesn't belong. Yes there's a body kit that does beef up a car that looked almost wrong in a man's hand before, especially that deep front spoiler and those beefy 19" Hartge Classic wheels. But the noise erupting from this centrally mounted exhaust tips belongs to a different genre, evidenced by the quizzical look of the locals when this nightclub bouncer in a dress rolled through town.

As do the figures. Not only will this 450bhp beast blast to 60mph in a borderline stupid 4.6s, it will keep roaring all the way to 188mph. In gear acceleration is intense, too, thanks to 376lb/ft of torque heading through those rear wheels and ripping up the tarmac.

Thankfully Hartge has made the most of BMW's legendary split personality: the double VANOS system. Kept beneath 4000rpm, cruising in a higher gear, the H1 is a docile beast that will take the daily grind in relative comfort.

Of course it's a firm car, Hartge has fitted a sports suspension kit that drops it 30mm and changes the attitude of the chassis, but it soaks up bumps and the black patch-up tarmac littered on German roads with consummate ease. And for those that think the testing regime on a tuned car is a little suspect, this car has pounded the Nordschleife, as has every Hartge before it, alongside the big-league manufacturer efforts.

And when the rev-counter strays past the watershed, and things get gory, what looks like a Chihuahua turns into a snarling, rabid Timber Wolf. The wheels will spin in third gear and, on the short back straight, the speedo raced round to an indicated 250kph as that low roar of the V8 reached its peak. On its way there the car shimmied through standing water, revs soaring just for a missed heartbeat until those huge front Pirelli PZeros found solid asphalt once again and we set off an another rollercoaster ride to the hairpin that was taken at increasingly obscene angles thanks to a huge runoff area and the most pliable chassis I've driven in months.

Perhaps unsurprisingly for a rear-wheel drive hatchback with that many ponies, it doesn't need much encouragement to break traction in the corners. Driven with a timid right foot the H1 always tends towards understeer, but drop the throttle to the floor in hairpin and this beast will slide right down the next straight on full opposite lock. In the dry, the tyres would have been toast, in the wet it was just a recipe for serious fun.

Which, had it not been for the Limited Slip Diff, might not have been the case. The chassis is astoundingly well balanced, with a 52:48 front: rear bias despite the new engine adding 200kg to the overall weight.

The V8 is shorter and fatter than the inline six, and looks directly connected to the steering wheel with the bonnet up, so the legendary balance on offer from BMW is barely affected and with all the modifications elsewhere this car handles a million mile better than the machine that gave its life to make it happen.

Hartge learnt long ago that not everyone with the money to buy a road going racer would have the talent to keep it on the black stuff. They don't like edgy cars, either, and the LSD with a 0-99 per cent locking mechanism is a long-standing feature on their big power conversions.

Plenty of cars that will take corners faster, but this has to be a contender for the most entertaining to drive when you're drifting through a third gear bend at 80mph in conditions so severe a French crew armed with a BMW M6 stayed indoors all morning. Driven to these extremes a Ferrari would take the combined skills of Michael Schumacher and Starsky, my mum could hang the back out on the Hartge.

Like Yvan Muller's extreme ice racing escapades, the car can go into bends almost in reverse and come out the other side ready to catapult down the straights with racing car-acceleration. Essentially, the H1 is a 450bhp go-kart - the essence of the dream car.

An initial tendency towards understeer, accentuated by standing water left by the downpour, was easily countered with a bootful of power and all the steering lock there was.

It was one of those cars that had me itching for a few more laps, even after 40 behind the wheel. And despite the punishment the car felt tight as drum on the way back to the factory, and that's a good sign.

In fact this car was so good on the public road it could almost be a daily driver. Despite the firm set-up it soaks up bumps better than it should and the Alcantara sports seats, carbon-fibre and aluminium throughout the cabin hint at sporting performance without giving up the long-haul ability. It really is that good.

There was just one problem that firmly slots this machine into the track/weekend variety. Without the exact amount of heel-and-toe on the downchange, this beast's rear axle locks like a Tetanus victim's jaw and sends the car into what would be, on a public road, a terminal slide. Of course on the track it just sets the car up for the next lurid bout of sideways action, but on the road this could be an expensive precursor to a rendezvous with a tree.

You can stay off the engine braking and use the monumental eight piston calipers at the front and four-piston rears clamping on to 380mm discs, but where's the fun in that?

And that's what the Hartge H1 comes down to: a bit of fun. There's no physical way to justify that kind of expenditure on this car when a 911 Turbo comes in at roughly the same cash. But this isn't a car for those that worry about money, it's a third, fifth, seventh car for those with everything else they can think of in the garage. At a rough guess, it would help if their first name were Sheikh.

So how many have they sold? Errrrm, none. There were a few solid enquiries, but as it stands this is the only one in the world. So it's a truly ragged, unique experience, and if you're in the market for a rocket-powered bread van you could do far worse than heading to Merzig.