The CT6 will likely fly under the radar of the luxury sedan crowd. Made in Detroit, styled conservatively, and lacking a V8 option, Cadillac’s new standard bearer might leave those who do notice it scratching their heads. If one makes it to the door of the CT6, though, and happens to open it, they’ll begin to see the straightforward appeal of this new offering. Spend a week behind the wheel – even with “just” a four-cylinder engine under the hood – and this big Caddy might just grow on you.

The base motor in the CT6 is a direct-injected, turbocharged, 2.0-liter inline-four offering 265 horsepower and 295 pound-feet of torque (yeah, those output figures are worth another read). In the 2.0T, that power is only directed to the rear wheels. It’s a punchy little engine, and it’s impressive to see how quickly it gets this fullsize sedan moving. Turbo lag is nearly imperceptible, and the CT6 accelerates briskly through the lower gears. It feels super light for its size, and the brakes have no problem hauling it down to a quick stop. At highway speeds, though, the effect fades. While there are no concerns about power reserves on city streets, you’re reminded of the motor’s small displacement in the higher gears. Even worse is that the engine note is wholly unsatisfying. A synesthete* might describe the sound as “beige.” 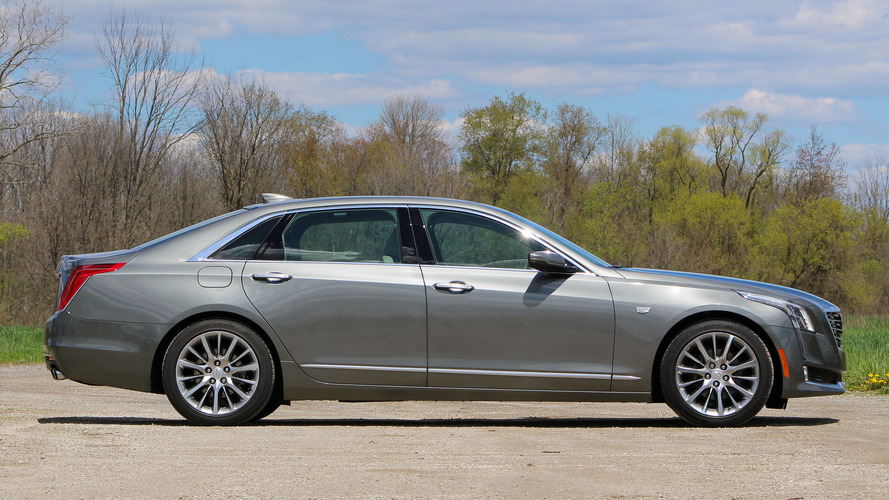 Under normal conditions, and especially in the city, it’s quite quiet.

Cadillac’s luxury cruiser does offer a pretty serene driving experience, though. Under normal conditions, and especially in the city, it’s quite quiet, thanks in part to that small engine. It’s bright and airy inside the sedan, especially with our tester’s light-colored leather interior and panoramic sunroof. The seats are comfy, if under-bolstered, and the materials throughout the cabin look and feel attractive. The 34-speaker Bose Panaray sound system is enveloping. Overall, it just plain feels pretty nice going down the road.

One of the biggest strengths in the CT6 is in its suspension, even without the Magnetic Ride Control available with the car’s more robust engine offerings. The ride is smooth, ironing out the imperfections in the road. At the same time, though, the CT6 feels super connected, and does a fantastic job of conveying information about what is going on between rubber and asphalt without adding in a layer of unhelpful, annoying, or fatiguing vibration. The base suspension really feels like it has struck a wonderful balance between negating large motions without being completely isolating. 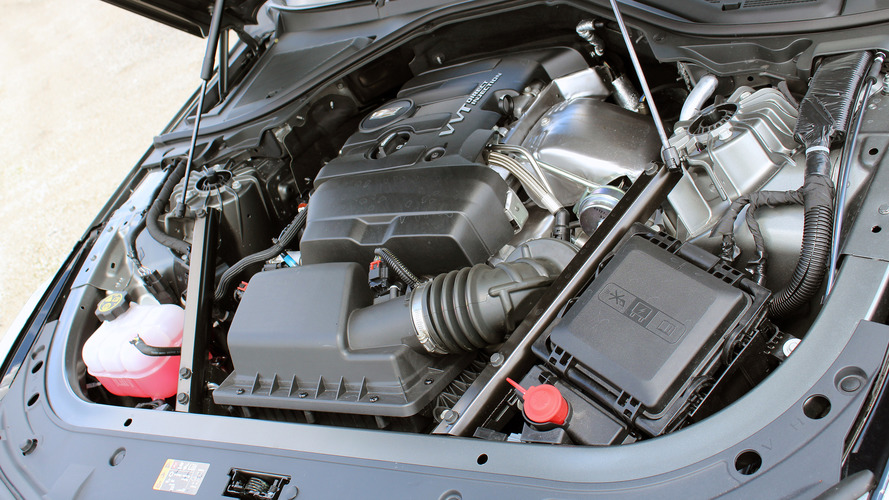 As far as steering, throttle input, and suspension are concerned, they appear to be uniform between the two driving modes when equipped with the base motor.

The CT6’s electric power steering feels fine and dandy while cruising, and it’s easy to keep it pointed straight without having to make a million tiny steering adjustments. In the turns, though, the weighting feels wholly artificial, with the effort boosted perhaps a bit too high to offer much confidence in the corners. We’re looking forward to trying out the active rear steering available in higher levels of the CT6 to see if that provides any noticeable improvements in the way the car and driver connect. At the very least, this steering setup improves the turning circle of this 17-foot-long sedan.

Depending on your mood or conditions, CT6 has a button to choose among Tour, Sport, and Snow/Ice driving modes. As far as I could tell – and since the winter weather mode wasn’t applicable during my time with the CT6 – the only discernable difference between Tour and Sport was in the transmission mapping. The transmission simply held onto gears significantly longer in Sport mode. As far as steering, throttle input, and suspension are concerned, they appear to be uniform between those two modes when equipped with the base motor.

Cadillac’s eight-speed automatic does shift quite smoothly, though. Transitions from one gear to the next are noticeable, but you don’t feel much, even under hard acceleration. The gear selector also has an “M” position that allows you to shift on your own using the small plastic paddles on the back of the steering wheel. There’s about a beat and a half after pressing the paddle until the car shifts. It’s quick enough – but barely – to feel satisfying when you want to use it, but the Cadillac seems perfectly fine shifting on its own. 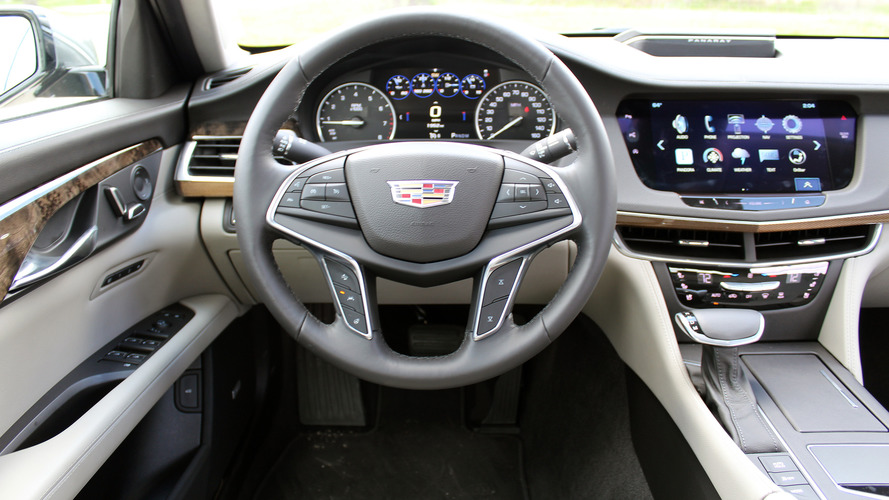 It’s bright and airy inside the sedan, especially with our tester’s light-colored leather interior and panoramic sunroof.

The latest version of Cadillac’s CUE infotainment system is showcased front and center in the new CT6. The 10.2-inch central display is a great size for easy use and visibility. Swiping and selecting on the screen is easy, but it can also be done via a touchpad (with haptic feedback) on the center console. Map displays for the navigation are quite clear, and being able to get easy-to-read hourly or five-day weather forecasts is quite convenient as well. CUE also offers Apple CarPlay and Android Auto, allowing you to mirror your phone features onto the central display in place of Cadillac’s own infotainment software. Sometimes, infotainment systems are so clumsy that one feels the need to resort to using their phone’s operating system. That’s not the case here.

If your smartphone is compatible with wireless charging (or has a case that makes it so), there’s a nice little spot sticking out from underneath the lid of the center storage bin. Even if you don’t use the charging feature, the space is well sized and placed to stash your device for easy access. The thing Cadillac really gets right in its infotainment setup – and a lot of systems get it wrong by trying to do too much – is that it’s really user friendly and intuitive. That goes for the ergonomics of the various controls, as well.

While active parking assist technologies are especially helpful in larger cars and SUVs, the execution of it in the CT6 leaves something to be desired. The system searches for a spot, then tells you to back up or drive forward slowly while the car takes over the steering. Many of my attempts ended up with the notice “Parking Failed.” The one time I did get it to work to completion, it took probably 10 times longer than had I done it myself just using the parking cameras and a bit of caution. The CT6 often maneuvers itself frighteningly close to vehicles or other objects before giving instructions to drive forward or backward, requiring incredibly slow acceleration on the part of the driver. Even then, sometimes the system just gives up partway through the maneuver. (If you happen to come across a visibly angry and sweaty CT6 driver behaving strangely in a parking lot, you’ll know why.) The suite of sensors and cameras on the CT6 are both extensive and impressive. With cameras showing a 360-degree view around the car during parking, and superimposed lines curved according to steering angle to show where the car is headed in reverse, who needs a robot to steer the damn thing? If you don’t want to hate the car for the wrong reasons, take advantage of the resources at hand, but park the car yourself. The people waiting to get by will thank you. 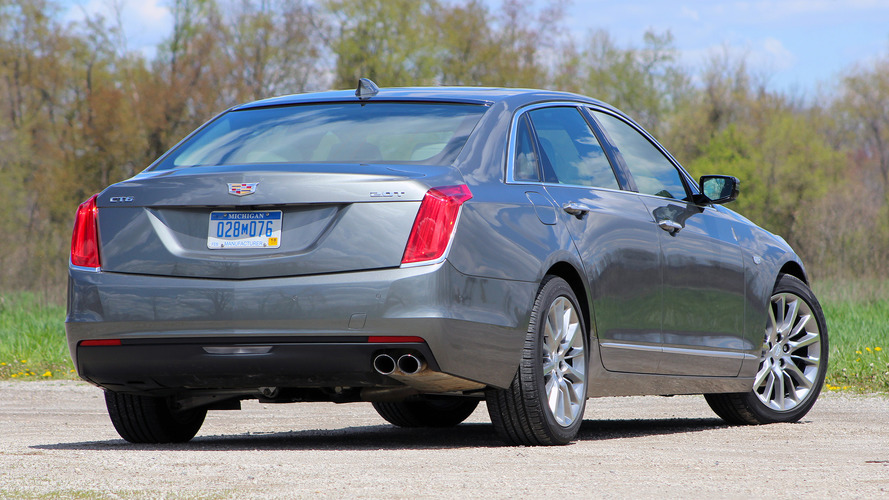 Cadillac gets enough right in the CT6 to make it worth serious consideration.

What feels novel, but I actually found useful, was the option to choose between the reflection or a rear camera display in the rearview mirror while driving (it’s included as part of the Enhanced Vision and Comfort Package). While it feels more natural to look at the mirror and focus into the distance behind you, that view is limited, particularly if the rear window is obstructed by rain. With the camera feed, it takes a moment to focus on the image much closer to your face (I grow old… I shall wear the bottoms of my trousers rolled), but the picture is very clear, and offers a more panoramic view behind you. While it may be harder to judge distance in the two-dimensional image, it does a lot to increase the amount of real estate you can see with clarity.

Cadillac gets enough right in the CT6 to make it worth serious consideration. The 2.0-liter engine allows the CT6 to offer a point of entry well below the cost of the competition. Sure, the Cadillac may not turn heads the way its German counterparts will, but it offers comparable space – it’s about two inches shorter in wheelbase and overall length than the Mercedes S-Class, and is just shorter than the long-wheelbase BMW 7 Series and Jaguar XJ. The fact that you can join the Long Luxury Car Club for about $8 grand less than the closest competitor (the Hyundai Equus, soon to be Genesis G90) is even more appealing once you sit inside the CT6’s gracious cabin. If you can swallow your pride and stick with the perfectly livable turbo-four, pat yourself on the back. You know a good value when you see one.

*If you do happen to project or associate colors with sound, and have access to a CT6 2.0T, I’d absolutely love to hear what you think of the engine note.