The AMG SLC43 is much better than the SLK55 it replaces, more sterile than the SLC300 it overshadows.

The Greek word katabasis is defined as “a retreat, especially a military one.” It was coined to describe the long, humbling eviction from Persia of the “Ten Thousand” Greek mercenaries hired by Cyrus the Younger, after Cyrus was killed in battle. The word literally means “going down.”

Such heavy historical intro is occasioned by one line in the spec sheet for the 2017 Mercedes-AMG SLC43: a 0-60 mile-per-hour time of 4.6 seconds. The 3.0-liter, twin-turbo V6 SLC43 being 44 horsepower and 4 pound-feet of torque down on the naturally aspirated 5.5-liter V8 SLK55 it supersedes did not ruffle one barbule on one feather. The fact that the SLC43 is 0.1-seconds slower at America’s second-favorite acceleration test (after our beloved quarter-mile) compelled us to call for backup to verify we weren’t delusional.

That fraction of a second is an attack on the foundations of our modern car theses, which dictate that smaller, less-powerful engines are admissible, but under no circumstances do you ever go slower. Not even by a tenth of a second. The future demands more, and to give it less is beyond mere retreat, it is capitulation. Remember when Vader questioned the dark side? Remember how that worked out for him?

In this case, however, it makes for a better car. 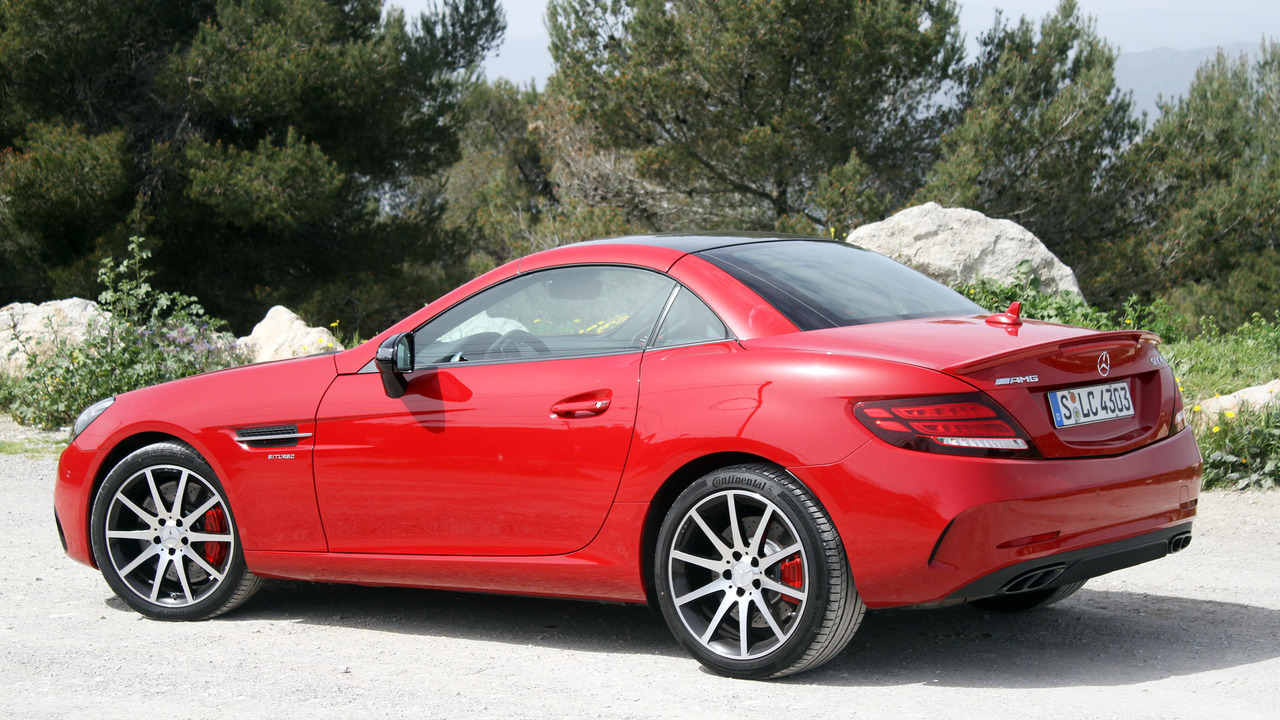 You’ll need a deep knowledge of Mercedes product to recognize it, though. Having spent so much time in the engine bay and rationalizing the product line – the SLK250 vamoosed last year, the 3.5-liter V6 SLK350 meets its maker soon – exterior cosmetic changes for 2017 are limited to the front fascia and rear diffuser. Up front, the straight lines of the past five years get bent into the curves and arcs of today’s Mercedes design language, the A-wing lower intake makes its introduction, the grille above asserts itself more forcefully between new, less chrome-y headlights. At the stern, the straked diffuser of yore is swapped for a smooth unit housing tapered trapezoidal exhaust finishers instead of the oval bellows’ that blew AMG’s battle cry for decades.

The driving quarters are revamped with a new steering wheel, instrument cluster, a larger, seven-inch nav screen, and in the SLC300, aluminum trim wearing a carbon fiber pattern; the SLC43 gets the real woven-composite deal. The trunk hides a new feature of its own: a separator that changes position automatically depending on whether the top is up or down. Up to now that’s been a manual operation. You will probably want to leave the top down as much as possible; cabin acoustics get so boomy and resonant that talking while the top is up is like having the Wizard of Oz issuing commands directly on your inner ear. 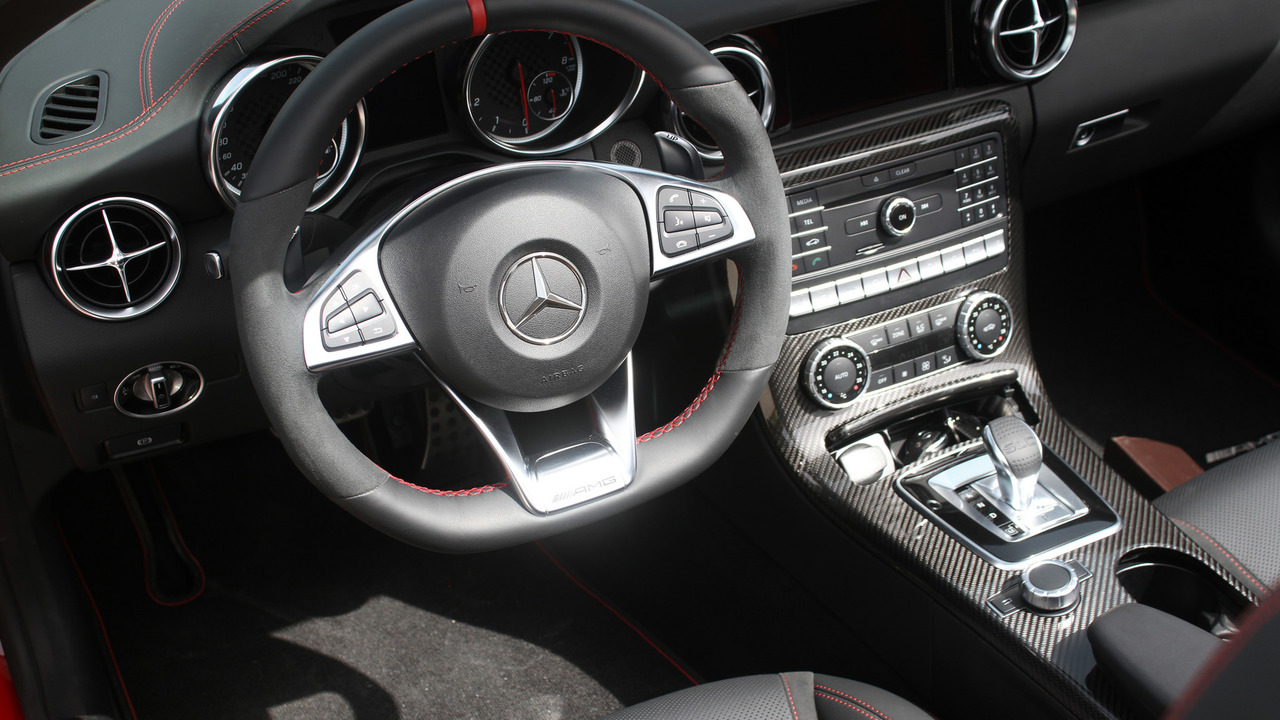 The battle for the throne is fought between old V8 worked through a seven-speed automatic and new V6 hooked up to the 9G-tronic auto. The newcomer takes it. The SLK55’s 416 hp and big V8 in a tiny chassis swing a little too much of Thor’s Hammer. Nose-heavy and overpowered – 86 hp more than the new Porsche Boxster 718 – it was fast and fun in a straight line, but cornering required (comparative) tip-toeing. The roadster spent much of its time rapping your knuckles through esses because it was too easy to mix incompatible amounts of power and steering lock.

The cutback on puissance and weight over the front axle encourages car and driver to flow up and down an alpine road, not to attack it. Sport, not the harder-edged Sport+, is the best mix of enthusiastic power delivery and suspension dynamics. The previous brakes were excellent, the SLC43 gets larger discs capable of hotter running. The lighter nose snapped into a corner with less effort without getting aggressive about it, the lighter car – 64 pounds lost overall – pivoted through with less lateral ponderousness and fewer power outages because you’ve goaded the thing too far. (If you plan to run this car like that horse in True Grit, do yourself all the favors in the world and get the optional Dynamic Handling package with the limited-slip differential.) Losing a negligible four pounds-feet of torque maintains the old cabrio’s habit of hasty post-corner exits, but you can get on the power sooner since there’s less of it. And Satan would need to start belting out metalcore to find a soundtrack that explodes with more invigorating anger under acceleration, braking, and overrun. 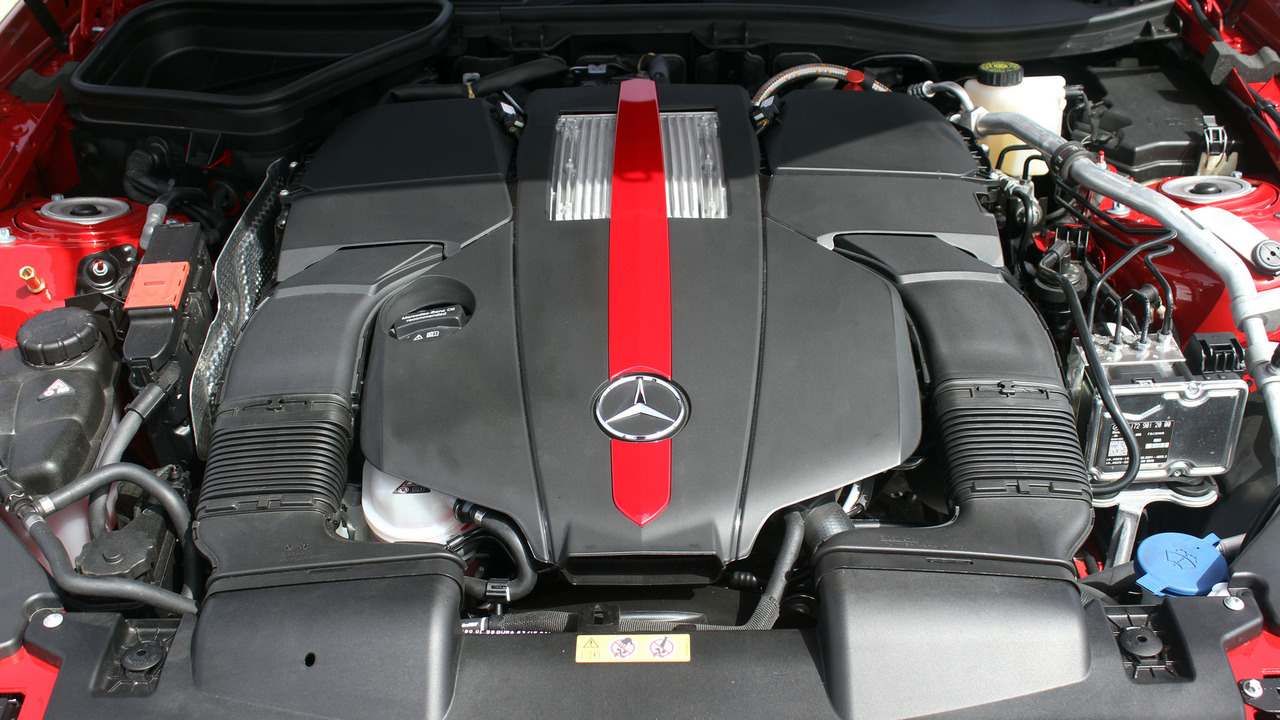 As much fun as that is, we preferred the SLC300. On a paper it appears a grave step down from the AMG: only 241 hp and 273 lb-ft from a turbocharged four-cylinder, and it cannot be had with the optional limited-slip differential available on the premium cabrio. It is, however, 223-pounds lighter with better overall chassis balance and heavy controls in Sport mode. Here you find the joy of driving a slow car fast, and never mind the recalcitrant inside rear wheel spinning its rubber through switchbacks. It is an exaggeration, albeit only a tiny one, to say that you pilot the SLC300 through a turn whereas you tell the AMG what you want it to do. The AMG is quantifiably faster, but the SLC300’s slightly slower reflexes come with more organic feeling through every phase of handling. And it clearly isn’t designed for this, since unlike the AMG the standard model will switch back to automatic shifting if you don’t work the paddles often enough, and the brakes let loose with righteous, smelly anger at being made to work so hard.

The new SLC43 is worthy improvement, make no mistake, the forward progress our ambitious era demands. In spite of that acceleration slippage, no buyer should have any cause to be disappointed. However, if it’s acceptable to step back by a fraction of a second, we advise retreating all the way to the SLC300. It’s proof that at the compact roadster end of the market, levity still beats engineering when it comes to pure driving sensations.