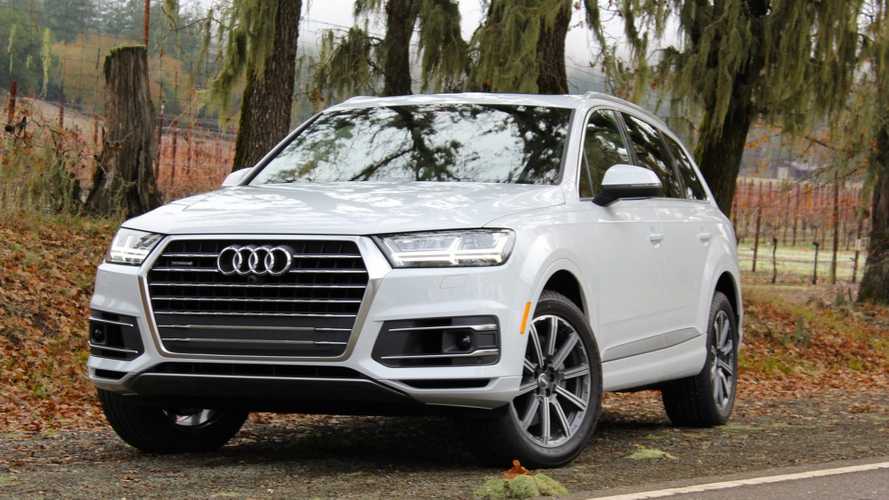 Audi's new Q7 looks good, and drives better than a seven-seat SUV has any right to.

The 2017 Audi Q7 is the latest example of Truth in Engineering, and doesn’t just impress on the specs sheet, it’s a joy on the road. To effortlessly maneuver a 4,900-plus-pound, 3-row, 7-seat road shuttle as sharply as, say, a 2-row crossover, reveals agility that is new to this segment. A segment where, more often than not, driving dynamics take a third-row backseat to comfort.

The secret handling sauce? Optional four-wheel-steering with (standard) Quattro all-wheel-drive. This results in a turning circle of just 40.7 feet. Less than vehicles a full size segment below, like the BMW X5, for example.

At highway speeds, the rear wheels tilt in the direction of the front wheels. Truth be told, the sharper and quicker the driver inputs, the more noticeable the handling benefits when compared to a traditional two-wheel-steering SUV. At lower speeds, the rear wheels of the turn opposite of the front wheels, significantly reducing the turning radius. Oh, that sharp left up the garage ramp? Damn easy. Like, unlocking cheat modes to beat GoldenEye on Nintendo 64 when you were 13-years-old easy. Another element to the impressive ride and handling characteristics comes from the (optional) air ride suspension system. The standard steel suspension is great, especially in Dynamic Mode, flowing with a snaking road through the towering California redwood forests. But the air suspension is damn great. This is because, unlike the standard setup, the air suspension can also be adjusted via different driving modes alongside other components like throttle mapping and steering effort. With the $4,000 Adaptive Chassis Package, the Audi is graced with both the four-wheel-steering and the air suspension. We recommend it.

The Q7 took turns at speeds it had absolutely no business dabbling in. To that end, the new Audi feels less like a top-heavy crossover at the limit and more like a big Allroad. Sharp, versatile, capable. Giving an added confidence boost is the rather well-done electro-mechanical power steering, channeled through a sensationally-textured helm, with athletic Goodyear Eagle Sport all season tires making contact with the road.

Compared to the outgoing model, Audi found 474 pounds to remove.

A third element to how the new Q7 bends conception is its weight. Compared to the outgoing model, Audi found 474 pounds to remove. That’s a grand piano, a few kitchen appliances, or two of yours truly. Less weight tends to mean more composure (with due respect to historic outliers like Winston Churchill, of course).

Anyway. While the trifecta of added lightness, four-wheel steering, and air suspension provide agile road behavior to an otherwise not-agile-looking vehicle, a new version of Audi’s supercharged, 3.0-liter V6 doesn’t let the chassis down. Gifted with 333 horsepower and 325 pound-feet of torque between 2,900-5,300 rpm, the 4,963-pound Audi can take off to 60 miles per hour in just 5.7 seconds, and will continue to a top speed of 130 mph. There isn’t the faintest hint of supercharger whine, and that blower unit can uncouple itself from the crankshaft when appropriate, reducing parasitic loss and increasing fuel economy. The Tiptronic eight-speed transmission is probably even more impressive than the engine, as it becomes invisible. This is good, as people only want to talk about automatic transmissions when they suck; when they can’t find the right gear, or their shift points are otherwise undesirable. This Audi eight-speed simply did its job, and did it well.

The throttle response is where it needs to be: nicely crisp and more so in Dynamic mode. Brake feel mirrors that behaviour: not spongy in the least. The stoppers are confident enough to do their job when the Pacific Coast Highway gets foggy, and there’s a random free range cow with a wish to be steaks, in the middle of the cliffside road.

The throttle response is where it needs to be: nicely crisp and more so in Dynamic mode.

Though, say that cow was a vehicle or a pedestrian, and the driver was for whatever reason distracted. Such a scenario would alert the suite of active safety technologies found in the Q7, which could go so far as to autonomously bring the seven-seat crossover to a halt. Depending on the speed (closer to 25 mph than 50 mph), and if the Q7’s radar sensors pick up the shape of a vehicle or human in front, a pre-warning alarm will flash at the driver, with the next sequence bringing forward a pulse in the braking system. After that, the seatbelts automatically tighten, the windows begin to rise up if lowered, and emergency braking initiates. All hopefully in time to prevent what was ultimately the driver’s task to avoid in the first place, but so it goes. Audi did demonstrate this safety feature, in clear weather, and in broad daylight. It worked in that controlled environment. But nobody should leave it up to chance in the real world.

There’s also an active lane keep assist feature. When paired with radar adaptive cruise control the Q7 can basically handle its own business in the midst of a traffic jam. Though it needs to be noted, this is not an autonomous function. The system will chirp and chime at the driver to regain control of the wheel if it senses his hands have let go for more than a few moments. On more dynamic roads, the lane keep assist nags a bit more than it should. There’s little to no deviation from the very middle of the road allowed. It begins to irk when trying to give oncoming vehicles a wide berth, or when attempting to maximize the space of a lane in and out of a winding stretch of pavement. We couldn’t figure out how to disable the feature, either; a blemish on an otherwise adventurous nine hours with this bang-on SUV.

For the audiophile, there’s an optional Bang and Olufsen sound system with 23 speakers and 1,900 watts.

The interior experience echoed the driving experience. Audi has proven again that its cabin design is a major strong suit, with surprisingly good outward visibility from the cockpit, thanks to a lowered and flattened dashboard. There isn’t a material that feels cheap or out of place. The Audi MMI infotainment system is sharp and remains the easiest system out there to use while driving. Google Maps navigation and Audi’s new Digital Cockpit features also add to the experience, as does the introduction of Apple CarPlay (with Android Auto coming in the springtime, hopefully). For the audiophile, there’s an optional Bang and Olufsen 3D Advanced sound system with 23 speakers and 1,900 watts of power. Sure it’s a $5,000 option, but good luck finding a comparable unit elsewhere. There’s even an LED ambient interior lighting feature, allowing for 900 different colored lighting combinations. Combine the B&O system with the lights, and you might be at liberty to have your own personal rave in the confines of the Q7 cabin. We recommend parking first, for maximum dancy-party action.

At the bottom end, the 2017 Audi Q7 – which launches in America starting January 2016 – has a starting MSRP of $54,800 (that’s the Premium trim level). The middle-ground Premium Plus comes in at $58,800, and the top-end Prestige model comes in at $64,300. As is the typical case with luxury marques, the options can quickly tip the scales; before you know it you could be ordering a new Q7 for nearly $90,000 loaded. However, we can’t say it’s unjustified based on the market. Even that rate is a bargain for a big SUV we like driving this much.