The Venza is a family crossover with sharp looks and above-average fuel efficiency.

The 2021 Toyota Venza stands out in a sea of mundane shapes. The crossover's stylish exterior demands attention, and its cabin feels premium – outshining even more expensive options in the Toyota lineup. A hybridized engine lives under the hood, strengthening the fundamentals of this upscale crossover with great fuel economy.

Since the Venza is only available as a hybrid, the congested highways and insane gas prices of Los Angeles made it the ideal place to put it through its paces. After a week of extensive driving, it’s clear that this premium crossover follows through on its on-paper promises by being a great tool to tackle crowded cities, only hindered slightly by a few minor flaws. 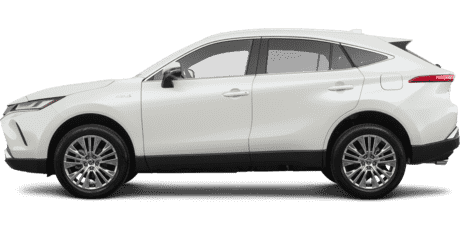 The Venza stands out against its competitors and the rest of the Toyota lineup, adopting a distinctly different design language. No matter the angle, the styling of this crossover just works. It all starts at the front, where attractive LED headlights flank a dark, imposing grille. These elements come to a point just below the Toyota badge, giving the Venza a sharp look without harsh lines.

My tester sported a relatively tame Coastal Gray Metallic finish, which despite its low shine, still managed to catch a few glances. However, if a gray Venza isn't flashy enough, Toyota offers great alternative colors like Ruby Flare Pearl, Blueprint, and Titanium Glow. These brighter shades help accentuate strong styling elements such as the shoulder line while contrasting nicely against the dark trim throughout.

That shoulder line then blends into the LED taillights that span the width of the rear hatch. At night, these lighting elements put on a show, almost mimicking the effect of the latest Lexus NX. Overall, the Venza is recognizable as a premium product that almost stands on its own, looking quite different from the rest of Toyota's current lineup.

Looks aside, one of the main reasons buyers consider the Toyota Venza is its efficient powertrain. Borrowing from the RAV4 Hybrid, the Venza is powered by a 2.5-liter four-cylinder hybrid engine, producing 219 hp and 163 lb-ft. Like every Toyota hybrid SUV, the Venza comes standard with all-wheel drive and a continuously variable transmission.

Around Los Angeles, I found it easy to achieve these figures. During my testing, extra-light use of the throttle on the resulted in computer indicated fuel-efficiency figures closer to 44 mpg over a 60-mile loop spent almost entirely on highways.

While Toyota is known for producing some of the most durable interiors in the business, seldom are they equally luxurious. However, the Venza strays by offering a completely different interior than the rest of the carmaker’s lineup, focusing on premium features. It all starts with the seats. While they feature Toyota's SofTex faux leather, the thickness of the material and the elegant stitching design help elevate the look of both rows of seats.

In front of the driver, you'll find a semi-digital instrument cluster with a small screen in the center flanked by two analog gauges that read out your speed and overall efficiency, omitting your revs. Despite being slightly low-res, the screen displays information in a nice layout that is adjustable and easy to read.

The optional 12.3-inch touchscreen is a nice addition, especially when more expensive options within Toyota’s lineup, such as the 4Runner and Sequoia, are stuck with smaller displays. As standard, you get an 8.0-inch unit that still offers up wired Apple CarPlay and Android Auto connectivity. However, the upgraded screen adds to the Venza's overall premium feel. The display's larger size and higher resolution make it ideal for looking at maps and seeing information more clearly at a glance.

Beauty Comes At A Price

Opting for the base Venza LE moves the starting price down to $33,885, including a $1,215 destination charge, but comes at the cost of premium features such as the large screen and the semi-digital instrument cluster. The stripped-out Venza then falls right in the crosshairs of the similarly sized and optioned Toyota RAV4 Hybrid, which starts at $30,115, including a $1,215 destination charge. Other similarly sized competitors such as the Ford Escape Hybrid and Honda CR-V Hybrid also manage to start below the Venza.

Around town, the Venza does a great job suppressing Los Angeles' loud city streets, making it a useful tool to tackle urban environments. However, take the Venza up to highway speeds and a substantial amount of wind and tire noise permeates through the cabin. The lack of adequate insulation also lets in a fair amount of engine noise that further detracts from the driving experience.

For context, both the Kia Sorento Hybrid and Hyundai Santa Fe Hybrid offer significantly greater refinement and relatively quiet cabins regardless of the speed. This puts the premium Toyota slightly behind its more affordable competitors.

Poor Cargo Space For Its Size

Since the 2021 Toyota Venza is 5.7 inches longer than the RAV4 hybrid, it should include more cargo space. However, the opposite is true. Despite its smaller size, the RAV4 offers up to 69.8 cubic feet with the seats folded, while the Venza only manages 55.1 cubes. Even the smaller Honda CR-V and Ford Escape Hybrid have more room for stuff at 75.8 and 65.4 cubic feet, respectively. Move up to other hybrid crossovers closer in price point, and you get the likes of the Kia Sorento and Hyundai Santa fe, at 75.5 cubic feet and 72.1 cubes with the seats folded, respectively.

This premium Toyota also struggles in the legroom department, with 40.9 inches upfront and 37.8 in for the second row. Third-row seating is not available. In contrast, a Kia Sorento Hybrid includes ​​41.4 inches up front and 41.7 in the second row, while still including a third row as standard. Even the shorter RAV4 Hybrid offers up more front legroom at 41 in while matching the 37.8 in rear legroom figure.

How much does the 2021 Toyota Venza cost?

How efficient is the 2021 Toyota Venza?

The Venza consumes an average of 40 mpg in the city and 37 mpg on the highway for a combined total of 39 mpg.

The Venza is only available with two rows of seats, providing enough space for up to five people.