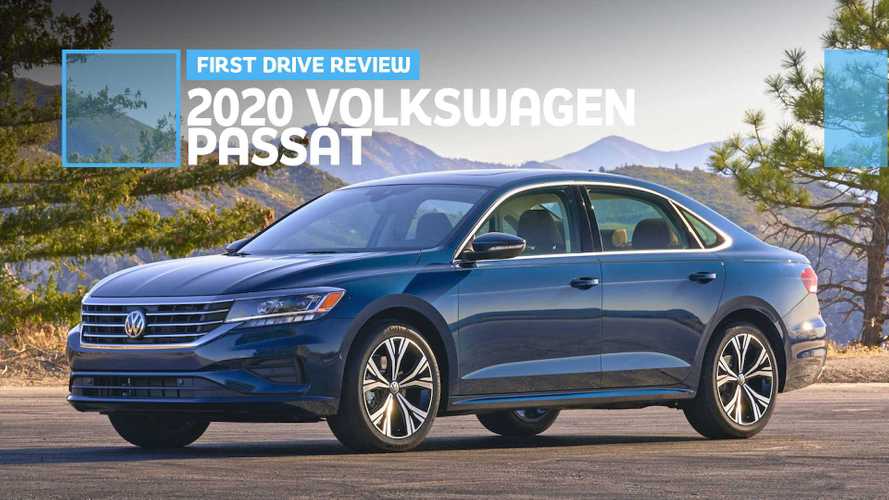 Meet the new Passat; mostly the same as the old Passat.

Volkswagen continues to gamble on the mid-size sedan segment. However, the brand is stepping away from high stakes play with the 2020 Volkswagen Passat. Well, at least in North America. Whereas China and Europe each receive newer Passat models based on the brand’s modular MQB architecture, the U.S.-spec Passat soldiers on with the same PQ-based underpinnings that it’s relied on since the 2012 model year.

Make A Pass At The Passat:

Despite its old bones, the 2020 Passat looks almost nothing like last year’s car. Credit a rigorous exterior makeover that ditches the 2019 model’s bland design for more stylish wares. Almost all of the Passat’s body panels are new (only the roof panel carries over), and the resulting exterior redesign reforms the proportions of Volkswagen’s mid-size sedan.

Revisions to the Passat’s window and shoulder lines – the latter of which runs the length of the body side and merges with the trunk and LED taillights – add more dynamism to the styling. These features complement a more bulbous front end that’s responsible for the bulk of the sedan’s 1.7 inches of additional length. LED headlights are standard across the board, and the lamps reside within large bezels that bookend the Passat’s chrome-lined grille.

While the Passat certainly looks less dull than before, its design still lacks the elegance or charisma of competitors such as the Hyundai Sonata and Mazda6. Opting for the racier Passat R-Line does improve the sedan’s aesthetics somewhat, though. Thank the trim’s more aggressive front and rear fascias, trunk-mounted lip spoiler, and 19-inch wheels and tires, which fill the fenders far better than the 17-inch setup of the lower-level S and SE models or the 18-inchers of the top-line SEL.

Still, the R-Line’s enhancements are largely decorative and the trim relies on the same turbocharged 2.0-liter inline-four that powers all Passat models. Like last year, the engine makes 174 horsepower. Torque, however, rises by 22 pound-feet for a total of 206.

The standard six-speed automatic transmission is unobtrusive in its actions and it willingly downshifts with a stab of the accelerator pedal.

With almost no noticeable lag from its turbocharger and a torque peak of 1,700 rpm, the Passat’s powertrain proves an acceptable companion on the vast highways that cut across Southern California. The standard six-speed automatic transmission is unobtrusive in its actions and it willingly downshifts with a stab of the accelerator pedal. Pushing or pulling at the gearshift lever or tapping the R-Line’s steering-wheel-mounted paddles affords manual control of the gearbox.

Thanks to its engine’s additional twist and a shorter final drive ratio (3.9:1 versus last year’s 3.2:1), the Passat reportedly cuts a half-second off of its sprint to 60 miles per hour. We wager the model now hits the mile-a-minute mark in about 7.5 seconds.

At least the Passat possesses competent-enough lateral dynamics. Credit its aging chassis, which remains impressively stiff and composed hurtling along the curving canyon roads outside of Los Angeles. Further confidence comes courtesy of the car’s light and direct steering, as well as the reasonable grip of the R-Line’s 19-inch Falken Sincera SN250A all-season rubber. None of this is to say the Passat is particularly fun to drive – it’s not. In fact, the Passat’s lateral dynamics are as listless as ever. Nevertheless, the mid-size sedan provides a welcome stoicism from the driver’s seat.

The mid-size sedan provides a welcome stoicism from the driver’s seat.

What the Passat once again fails to offer, though, is a centered steering wheel. Instead, the model’s tiller remains off-set to the right, which makes for an uncomfortable driving position during prolonged periods behind the wheel. Volkswagen ought to have spent a little less money redesigning the Passat’s body panels and invested more in repositioning the sedan’s steering column.

Big On Space, Low On Tech

Overall, the changes to the Passat’s interior feel less ambitious than those of its exterior. While the model’s redesigned dashboard incorporates contemporary cues such as air vents that appear to span the width of the cabin, its 6.3-inch touchscreen infotainment system and analog gauges lack the pizzazz and technological capabilities of the 8.0-inch touchscreen and 10.3-inch digital gauge cluster that Volkswagen offers in its smaller Jetta.

That said, the Passat includes a number of modern infotainment and safety features such as standard Apple CarPlay and Android Auto compatibility, automatic front braking with pedestrian detection, blind-spot monitoring, and rear cross-traffic alert. SE and R-Line trims add adaptive cruise control and lane-keeping assist, however, only the most expensive SEL trim offers the likes of automatic high-beam headlights and an in-dash navigation system.

Regardless, all Passat models include a quiet cabin and a suitably spacious rear seating area that affords 39.1 inches of legroom. Although it’s not class leading, the Passat’s well-cushioned rear bench includes more than an inch of additional legroom over the Camry’s. Alas, it still falls far short of the Honda Accord’s 40.4 inches of rear legroom.

Rather than going big or going home, Volkswagen makes a safer bet with the 2020 Passat. Of course, playing it safe isn’t necessarily playing it smart, and the German mid-size sedan’s demerits include comparatively poor fuel economy, an uncomfortable driving position due to an off-set steering column, and a relatively small infotainment screen.

Volkswagen believes the model’s new styling, attractive set of standard safety and convenience features, and big back seat are enough to keep mid-size sedan buyers interested in the Passat.

Yet, Volkswagen believes the model’s new styling, attractive set of standard safety and convenience features, and big back seat are enough to keep mid-size sedan buyers interested in the Passat. It also doesn’t hurt that the sedan’s $22,995 base price is among the lowest in the class (only the $22,095 Chevrolet Malibu and $22,745 Subaru Legacy undercut it).

Only time will tell if Volkswagen’s smaller stakes gamble pays off. As is, the 2020 Passat’s relative value and spacious cabin are about the only items keeping it competitive against a number of newer and more advanced mid-size sedan rivals.