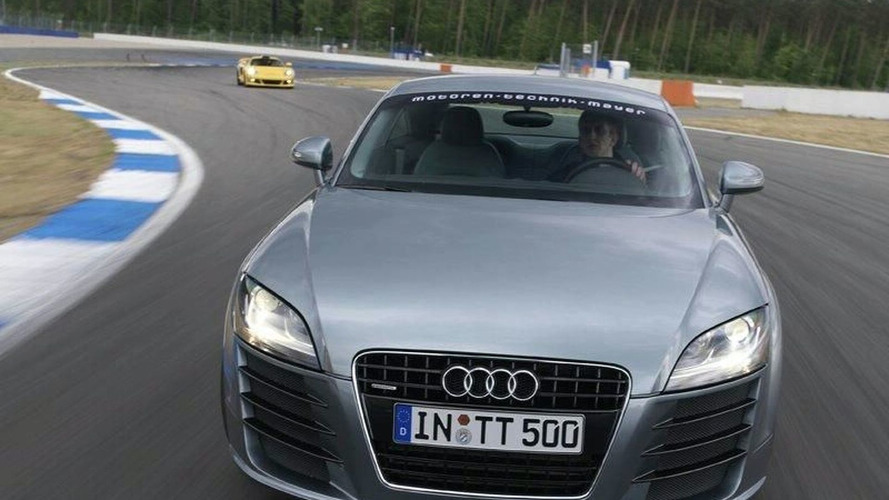 Fewer cars have launched to a larger fanfare than the Audi R8, with a presidential-style tour of the world followed by a new religion formed at the hands of the motoring press. But take the lowly TT V6 to MTM and they will give you back a car that will bl

Fewer cars have launched to a larger fanfare than the Audi R8, with a presidential-style tour of the world followed by a new religion formed at the hands of the motoring press. But take the lowly TT V6 to MTM and they will give you back a car that will blow the big boy clean off the map.

With a power-to-weight ratio closer to a Lamborghini than anything in its own family, MTM’s Turbocharged V6 is faster than the supercar that has won over the world - much faster. Forget claimed figures, potential and all of that other nonsense, a German magazine went to the trouble of borrowing Hockenheim for a series of independent tests and the TT hit 62mph 0.5s faster than the R8 – which is pretty much a lifetime.

This is a company that knows everything there is to know about the TT, having created the Bimoto from the original blobby Audi that went for the 400kph landmark speed record for tuners just weeks after our trip to Hockenheim and failed to hit the mark by just a few kph. For a TT that is just ridiculous, and so is this one.

Thanks to a low pressure Turbocharger grafted to the 3.2-litre V6 engine, the RTT has all the power of the R8 and more torque without the bulging hips and excess fat. Take that side stripe off Audi’s supercar and suddenly the body boasts all the definition of Roseanna Barr on a cream cake diet. This whippet could hide in Big Brother’s shadow without losing any of the impact.

Bigger air vents feed the voracious turbocharger and from the front it looks like the R8 should have with those vicious blades ready to slice and dice the car in front. It’s a popular look with TT tuners and there will be more like this throughout the car’s lifespan.

Visible exhaust cans and menacing exhaust pipes housed within that low slung rear apron take the smooth, chic, elegant TT and give it muscle, machismo and aggression from another world. And for just €2000 the bodykit is a cheap way to change the car almost beyond recognition.

The engine conversion is an altogether more costly process, but then it would be as MTM has turned a civilised coupe into a borderline psychopath when you truly drop the throttle. It will blast past 62mph in 4.1s, 125mph in 15.3s. And it will barely pause for breath until it bangs into the sixth gear limiter at 175mph. That’s the only chance the R8 would have to catch up and the RTT would be a long way down the road.

And, crucially, it feels faster than the super smooth big brother. Plant the gas and every wheel bounces wildly off the all-wheel drive and ESP systems like the Tasmanian Devil off the scenery. Every nuance transmits to the cabin through the seductive twitches and noise as the computers fight to contain 415bhp and 368lb/ft of torque and it sounds like a major breakdown in a sewing factory.

Clattering on to the bridge leading from the track at three times the suggested speed limit, the front wheels took off and spun violently before finding its feet and ripping down the road before the driver registers what’s even happened.

Without the gadgets reining it in the car would slide off the side of the map. Indeed had it not been for strict orders not to play the fool on our brief foray on to Hockenheim Circuit in Germany then the RTT would have needed a new set of Michelin Pilot Sports on its return to the pits.

Stiffer suspension would have resisted such tomfoolery, and they’ll do it if you want. In fact they can strip the interior, fit a fire extinguisher and provide a 1300kg honest-to-goodness rocket. But on this model MTM ignored the obvious temptation to drop the car to the bump stops and left Audi’s suspension alone. That keeps the price below €73,000, it also means this machine won’t bounce off those 19” Bimoto rims, grind its splitter away to dust or break the driver’s spine on anything less than a perfect surface.

You see this is the TT gone wild, the reason for knocking on Roland Mayer’s door, but this is a super sportscar without the grief. There’s no folding yourself into the seat, no petrol fumes drawing tears from your eyes and, surprisingly, no eardrum splitting noise. The V6 is loud and the rich 3.2-liter bristles to an aggressive, throbbing roar from those four 70mm exit pipes, but it never truly invades the cabin and makes your ears bleed.

The brakes, too, are beautifully balanced with a reservoir of genuine road use at the top of the pedal travel that bleeds off the speed. Stamp on the 380mm fronts and 310mm rears, though, and the car will simply stop and send your spleen flying into the car in front.

Driven with a modicum of self-control, this car is every bit as practical as the base TT. Driven like a lunatic it will leave the world-conquering R8 crying, shivering, violated and fully clothed in the shower. In this trim the baby of the line-up will blow the big boy off the road. If you’ve bought an R8, this little car could just ruin your day.