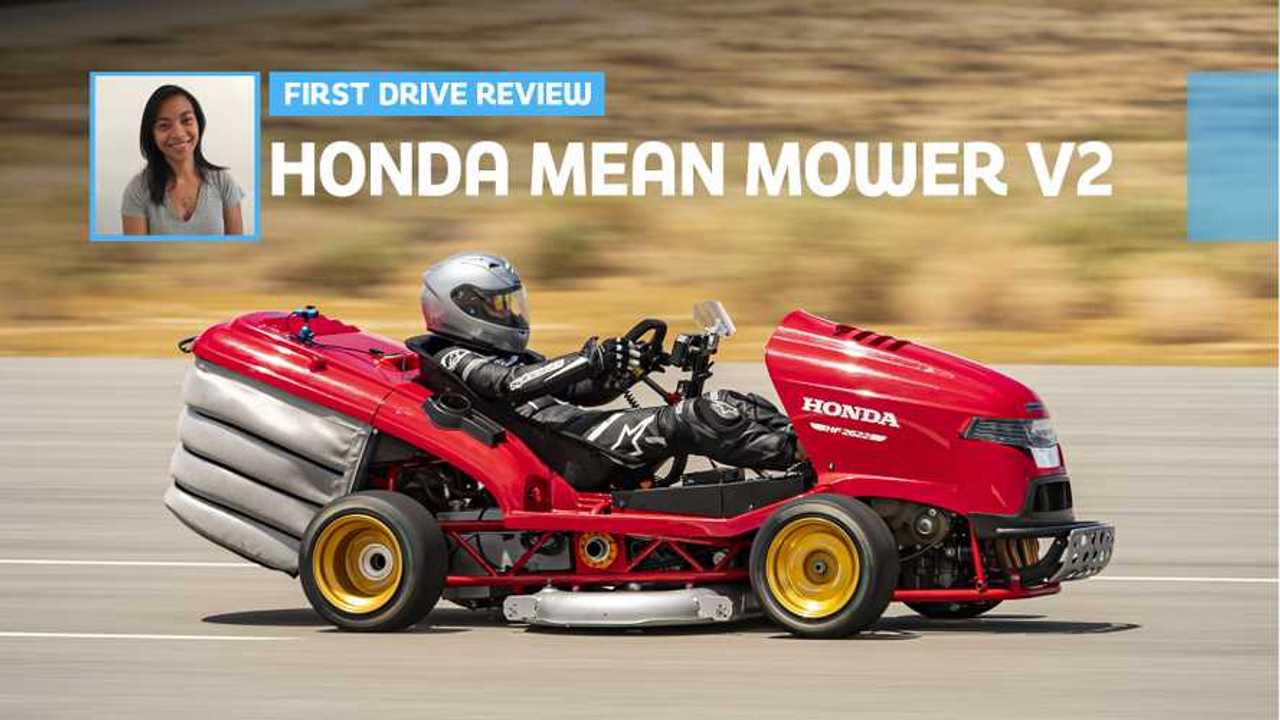 If California City lived up to its name (at least the way many of us might envision it), it would sit along the coast, on a serene shoreline with wide stretches of sand buttressed by the occasional imposing cliff. A winding two-lane highway hugs along with each apex bending toward an extraordinary vista, the next more beautiful than the last.

Instead, California City is located in Kern County, about 100 miles from California’s famed beaches. Nestled in the flatlands of the Mojave Desert, the brutal summer temperatures the county is known for is why my host, Honda, has its proving grounds here (as does a Korean conglomerate). But in California City, a town largely uninhabited until the 1960s (and seemingly still frozen in that time), a handful of auto and moto writers are holed up in the best Best Western the area has to offer. All to ride a lawnmower.

Did we mention that there are no lawns in the California desert. In fact, there are probably more snakes. And while I don’t have any official figures to provide, a quick peep at satellite imagery shows a whole lot of desert and chaparral. Any greenery is relegated to parks of questionable activity.

What is equally questionable is getting into the seat of the Honda Mean Mower V2. The lads and ladies from Honda U.K. decided the first Mean Mower wasn’t mean enough, despite a Guinness World Records title as the fastest lawnmower. It clocked an average of 117 miles per hour, but could apparently hit 130 mph. That’s more than enough to handle what little grass exists in California City.

But records are meant to be broken and grass is meant to be tamed, as they say (they say that second one, right?). In perhaps one of the most unlikely of LS swaps, a Viking T6 riding lawn tractor equipped with a Chevrolet Corvette V8 engine reached 134 mph the following year to best the Honda. Still, considering there was only a 17-mph difference between the 109-bhp (Honda HF2620) and 408-hp (Viking T6) records, this was hardly the end of lawnmower speed records.

Team Dynamics Motorsport and Honda U.K. have been racing partners since 2004, enjoying several championship years in the British Touring Car Championship (BTCC) series. In 2017, team manager James Rodgers approached the Honda U.K. Power Equipment group about revisiting the Mean Mower for no other reason than to “reclaim the world record.”

This vehicle is not just cosplaying for the next outdoor power equipment convention.

Rodgers may be a bit off his trolley to want to focus on what sounds like an extraordinarily nutty project, but he is ace when it comes to lawnmower shenanigans. With a team of roughly six people working more than 400 hours, the Honda Mean Mower V2 was born. But this vehicle is not just cosplaying for the next outdoor power equipment convention.

Utilizing a Honda HF 2622 tractor-style riding mower, the front cowl, grass box, and body panels are all stock. Under the hood, so to speak, is a 999-cc four-cylinder engine from the Honda CBR1000RR superbike. Also taken from the motorcycle are the clutch, ECU, six-speed transmission, and full-color LCD.

The rest, however, is bespoke, with many elements developed on CAD software and manufactured with 3D printing, such as the airbox. Performance pieces include carbon-fiber paddle shifters, a flat-bottom Sparco racing steering wheel, Kelgate front- and rear-brake calipers, 10-inch Goldspeed ATV wheels, and Hoosier R25B racing tires. The cutter deck was also retrofitted to accommodate two 6.0-inch carbon fiber blades which, yes, allows the mower to still guillotine grass.

After all is said and done, the Mean Mower V2 is estimated to produce more than 200 hp, have 86 pound-feet of torque, and weigh 483 pounds. According to Honda, its power-to-weight ratio is 850 hp/ton; that’s more than a Bugatti Veyron. Rodgers said exact numbers are difficult to surmise because there is no dynamometer to accurately measure its power.

Nevertheless, this maniacal machine accelerates to 60 mph in less than three seconds, exceeds a top speed of 150 mph, and achieves an estimated 35 mpg. Because killing lawns doesn’t mean you have to kill the planet. Or something like that. Either way, the Mean Mower V2 is so bonkers, it’s brilliant.

Which brings us back to the desert where the coachwhips and kingsnakes are actively slithering, a coyote is chased off our quarter-mile dragstrip, and the temperature is 96 degrees Fahrenheit before noon. Race-grade full leather suits, motorcycle helmets, and gloves are required, though, so who knows what as-tested temperatures are for me, the driver.

It was either chug electrolytes or lose consciousness.

The riding gear was generously provided by Alpinestars. So form-fitting was my particular suit that it looked painted on and then shrink-wrapped. Mercifully, I wasn’t the only one who needed assistance with suiting up (and down) when needing a bio break. It was either chug electrolytes or lose consciousness.

After watching a few colleagues do their sessions, it’s my turn to ride the beast. On paper, the Mean Mower V2 is impressive. Once ensconced in the carbon Superkart seat, which required some yoga master class contortions thanks to the immovable steering wheel, the Mean Mower V2 is intimidating. Like any human, I have questioned my life choices from time to time. This, however, was one of those times I could actually change the outcome.

Of course, I didn’t.

Rodgers and lead racing mechanic Craig Smith provided me with a short roadside tutorial because this moto-mower hybrid required an equally half-car, half-bike operation. There are three pedals just like in any stick shift auto, but the gears change like on a motorbike, with neutral living between first and second. Pep talked, helmet shield down, and with a rolling start, I propel swiftly into a stall. Oh, what the crumpet.

But operator error was quickly resolved, and away into insanity I rode. For the record, there was no speedometer. The instrument panel provided a working tachometer, but no current speed. The Racelogic VBOX affixed to the steering wheel provided top speed, but only at the end of a run. And to say I went into this blindly is an understatement.

My five-foot, two-inch frame eventually comes into play, and in the worst way. I do fit perfectly into the seat but need a little slouch in order to properly reach the clutch and throttle. (Because that’s never happened before). Thankfully, we were told not to use the brakes; simply lift off the throttle at the designated cone section. One less pedal for me to worry about!

However, even with a teeny droop, I can barely see over the cowl. I managed 55 mph on my first feeling-things-out excursion. Keep in mind, there is no roll cage, no seat belt, really nothing holding me in except maybe the steering wheel that’s mere inches from my chest. And I’m on a friggin’ lawnmower. So, yeah, traveling along at what’s considered an out-about-the-town speed was terrifying. And loud. Not inner ear-bleeding loud, but I’m also not riding a superbike until its tank is empty.

Keep in mind, there is no roll cage, no seat belt, really nothing holding me in except maybe the steering wheel that’s mere inches from my chest. And I’m on a friggin’ lawnmower.

Blame it on adrenaline or mass hysteria, but my confidence grew with each outing. The good is that I ended up hitting 97 mph. The bad is that I started sitting up straighter. The problem meant my lead foot wasn’t at full throttle as it should’ve been. The result is that as my right foot bounced with my speed increases, so did the throttle response. God save the queen!

More fun facts about the Mean Mower V2? It’s rear-wheel drive and has a solid rear axle. The chassis is made of T45 steel for flexibility, but no suspension is no suspension. And hopping violently at interstate speeds is beyond distressing. After about 10 minutes of smooth and rough riding, I was absolutely knackered having witnessed my life flash before my eyes more times than I’d prefer.

Yet I was also gobsmacked and enamored with this irrational contraption that none of us can appropriately fit into except for the slender Smith (at five-feet, ten-inches with a 32-inch waist) and professional karting and race car driver Jessica Hawkins. By the way, Honda again earned the title of fastest lawnmower in an announcement released the same day we tested. Hawkins was behind the wheel in setting a 0-100 mph time of 6.29 seconds.

Although the Mean Mower V2 is essentially a unique publicity project, when asked if one could be built per customer request, without hesitation, Rodgers replied, “Sure.” Even though Honda exited the U.S. riding mower market 20 years ago, the brand continues to be popular elsewhere, particularly in Europe (its walk-behind mowers, sold here in the U.S., are also great). And there certainly must be other expansive pastures that need pulverizing besides the Duke of Richmond’s.

Personally, I’m stepping away from the Mean Mower mania. I don’t own a home or have a yard to maintain, but if I did, the Honda Miimo might be more my cup of tea. A robotic lawnmower using intelligent sensors to meticulously manicure my backyard just sounds a little less ridiculous, right? I mean, it’s not like I’ll need a helmet to operate the bloody thing.