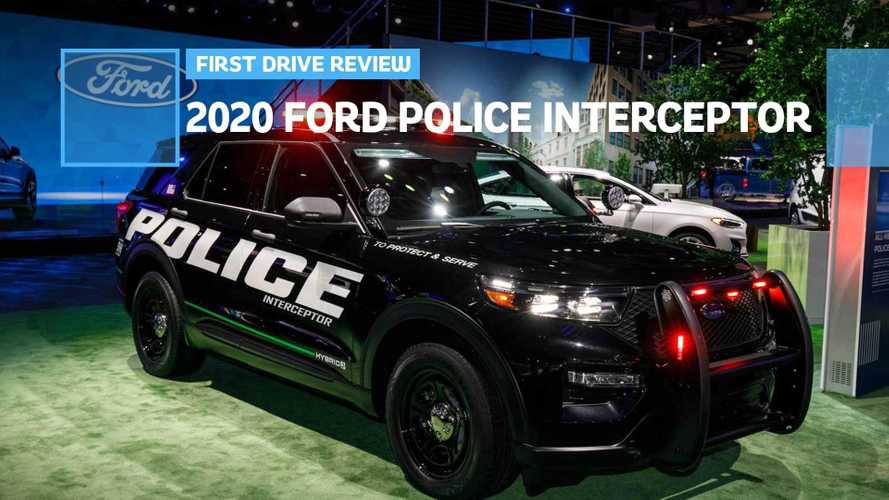 We were able to get behind the wheel of pre-production Police Interceptor Utility Hybrid models this week at the Ford’s Product Development Center (PDC) in Dearborn. Other than the meeting room displays and the specific vehicles being discussed, photos weren’t allowed because secrets and camouflage (which is why the attached photos are from the Police Interceptor Utility's Detroit Auto Show debut). Yet under all this shrouding, the main event wasn’t the shiny new Explorer-based police car. A deep-dive session regarding the Blue Oval’s future-proofing via electrification was the real headliner.

According to Dave Filipe, VP of powertrain engineering, Ford will invest over $11 billion in battery electric vehicles by 2022 to create hybrid versions for every mainstream model in North America as well as the introduction of a full battery electric vehicle (BEV). Europe and China should also expect to see both BEVs and mild hybrids as Ford anticipates internal combustion engines (ICE), hybrid electric vehicles (HEV), and zero emissions vehicles (ZEV) to comprise equal market share by 2030.

That’s an aggressive timeline. But if Ford’s electrification patents are any indication (1,300 in the last three years; 4,300 more are pending), the company is whole-heartedly all in.

Ford’s argument for BEVs, according to Filipe, is that although they’re not yet an affordable alternative for most consumers, there is continuing interest in vehicles that offer fuel-efficient performance. Case in point: 62 percent of Ford F-150s sold in the past few years feature an EcoBoost engine.

Combine that fact with the public’s love of crossovers, and it makes sense that the focus of Ford’s all-new, fourth-generation hybrid system is not the late Focus but on the Escape and Explorer, which rank second and third, respectively, behind the F-150.

As it will with its entire range, Ford uses a modular approach to hybrid technology. This plug-and-play approach means flexibility toward vehicle platforms without compromising performance or capability. The new platform, for example, will feature a liquid-cooled lithium-ion battery that’s 39 percent smaller than previous-gen hybrids. That means hybridization that won’t impact passenger or cargo volume.

And with that, we circle back to the Police Interceptor Utility Hybrid.

Ford’s nearly 70-year partnership with American police departments has kept heavy footed drivers scanning their rear-view mirrors for some of the brand’s police-spec vehicles. Ask anyone that started driving before 2011, and even now, they’ll be able to immediately identify the headlight signature of Ford’s most famous Police Interceptor, the Crown Victoria-based model.

With as much idling and city driving as patrol units do, the improved fuel economy promised by hybrids makes sense for cities and their tax payers.

With as much idling and city driving as patrol units do, the improved fuel economy promised by hybrids makes sense for cities and their tax payers. Ford first explored this segment in 2019 with the Fusion Hybrid-based Police Responder Hybrid, the first cop-spec hybrid. The new Explorer Hybrid-based Police Interceptor Utility is the second.

As clumsy as its moniker is, the Police Interceptor Utility Hybrid is all business. In Michigan State Police (MSP) and Los Angeles County Sheriff’s Department (LASD) dynamic testing, the 3.3-liter V6 hybrid placed second overall only to Ford’s 3.0-liter V6 EcoBoost Interceptor sibling. But while the twin-turbo V6 won out, the Interceptor Utility Hybrid returned lap times, top speed, and zero-to-100-mph numbers that were unquestionably quicker than its gas-chugging competition.

And we believe it.

Ford set us on a short driving loop within the PDC’s vehicle dynamics area. And even though we were allowed only two laps around the woefully brief course, there was a lot to glean from the brief drive. For a start, this surprising fact: Besides the basic vehicle platform and a handful of components, nothing on the Police Interceptor Utility Hybrid actually carries over from or to the civilian-spec Explorer (which we’re driving in June).

The 3.3-liter V6 hybrid setup relies on two pursuit modes that actively engage based on driving conditions and the driver's inputs. During a high-speed chase, for example, one mode will charge the battery as quickly as possible to keep the engine running at peak power. The “downshift” mode holds the transmission at the lowest optimal gear and is best suited for city driving and cornering. All this requires a completely different setup for the brakes, wheels, tires, steering, and suspension.

The 3.3-liter V6 hybrid setup relies on two pursuit modes that actively engage based on driving conditions and the driver's inputs.

To adjust for extended idling times, Ford recalibrated the modular hybrid system and ignition. For example, during quick stops (or you know, while pulling people over) drivers can remove the key from the ignition when exiting the vehicle without actually turning the engine off.

The standard all-wheel drive system reacts well in the corners and the steering feels fluid as well. One colleague describes stopping power of the uprated brakes as “sudden,” which is high praise considering the PI Utility Hybrid’s 6,840-pound weight. During a helmet-required hot lap around the facility’s test track, the Police Interceptor Utility Hybrid performed confidently on the tight steering and handling course. From J-turns to PIT maneuvers, this hybrid ute won’t be a slouch. In mentioning the fun factor to one of our cop buddies, his response was, “Duh! And mine even comes with a dog.”

The cop-specific mechanicals work alongside a cabin built for the job. As with past Police Interceptors, there’s a wider seat that’s finished in cut-resistant materials to accommodate (and protect against) an officer’s duty belt and all its attachments. Other police-spec features include a reconfigured instrument panel, different buttons all around, and even a steering column-mounted gear stalk. Ford stripped down the front seats, though, and then yanked out the third row, all so that local agencies can outfit the PI Utility to suit their specific needs. Unsurprisingly, the space behind the front seats is less comfortable.

So, perhaps Ford was just being honest by calling its newest law enforcement vehicle the Police Interceptor Utility Hybrid. Because it’s nothing like the Explorer. Or is it?

The Explorer first-drive event is less than a month away. Which coincidence or not is when the new Interceptor will be starting its shifts. Ford wouldn’t provide sales targets but as if this week, the hybrid currently makes up 14 percent of Police Interceptor Utility orders. Don’t forget to check your mirrors.