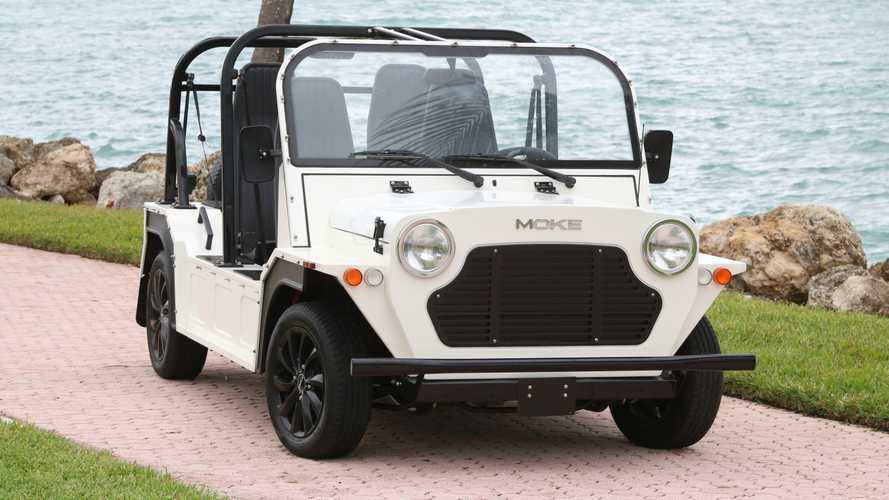 As in, ‘low-speed vehicle.’

Miami, Florida’s clear blue skies hide behind ominous gray clouds. In many vehicles, this weather is a minor inconvenience, but in the Moke America eMoke, it’s a considerable nuisance. With no formal doors or roof (a manually installed soft top is an optional extra), the little electric trucklet prefers to cruise under the guiding light of the sun or the gleam of starlight; not the constant threat of rain.

Still, intermittent showers fail to stop me from taking the eMoke for a spin around Fisher Island. Accessed by ferry (or yacht or helicopter, depending on your budget), the small residential island is a haven for the wealthy. It’s also an apt location for Moke America to demonstrate the eMoke in one of its more natural habitats.

With seating for four (including the driver), a small 0.9 cubic foot trunk, and an available audio system with Bluetooth connectivity, the eMoke is a modern take on a classic design. Sharing its styling with the Mini-based Moke of the 1960s, the American-made eMoke is more than 10 inches longer and three inches wider than the original. The extra inches result in a cabin that reasonably accommodates my six-foot frame, although the hard seats grow tiresome after a few miles of driving. (Moke America CEO Todd Rome notes that the eMoke I’m driving uses an older seat design.)

As a designated low-speed vehicle (LSV) by the National Highway Traffic Safety Administration (NHTSA), the eMoke is a road-legal machine with a top speed of 25 miles per hour. Which roads it can travel on vary by state, but Florida (as well as most other states) limits the eMoke – and other LSVs – to driving on surface streets with a posted speed limit of 35 mph or less.

With a 20-horsepower AC asynchronous electric motor powering the front wheels, the approximately 2,315-pound eMoke is by no means quick. However, the motor’s 70 pound-feet of torque blesses the little people mover with enough off-the-line thrust to help it reach the island’s 19 mph speed limit with reasonable haste.

Despite the island’s damp tarmac, the eMoke plods along Fisher Island Drive with surprising confidence.

Despite riding on damp tarmac, the eMoke plods along Fisher Island Drive with surprising confidence. Its 14-inch Compasal Grandeco tires keep the EV planted through turns and body roll is noticeably absent. Credit the sub-20 mph speeds, as well as the half-dozen batteries hidden within the pontoon-like sides of the eMoke (three on each side), which help keep the vehicle’s center of gravity low. An additional four batteries reside under the hood, for a total of 10, and a combined energy capacity of 12-kilowatt hours.

Those batteries afford the eMoke an estimated driving range of 40 miles on a full charge. Plenty for puttering around this 0.34 square-mile island or for cruising along Miami’s infamous South Beach. Charging the batteries from empty is a timely affair, though, with the eMoke requiring up to eight hours to recharge from a 110-volt outlet.

In spite of it missing common creature comforts or any sense of driver engagement from its slow and sloppy steering, the eMoke remains an entertaining little thing. There’s no air-conditioning or active safety features here, just the ocean breeze and a bevy of government-mandated passive safety items such as seatbelts, a manually operated parking brake, front and rear lights (including turn signals), and a trio of rear-view mirrors keeping me cool and reasonably safe. Meanwhile, a variety of optional rooftop patterns and an array of available paint colors for the body, bumpers, grille, and roll bar bring an extra dash of cheekiness and individuality to the eMoke’s chic looks.

Like a boat or motorcycle, the $17,975 eMoke is more of a novelty item than a rational purchase. It’s a toy that favors simple amusement over sensibility. In the right setting, such as Fisher Island, the eMoke is a joy to tool around in. Even if the occasional rain shower risks spoiling things.