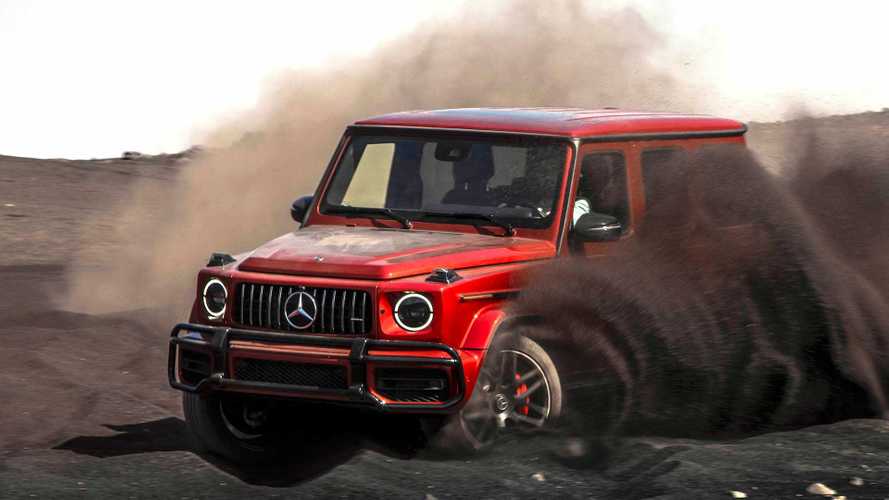 The 2019 Mercedes-AMG G63 is a silly thing. Rolling on summer tires and weighed down by heavy-duty off-road kit that includes a transfer case and a meaty front-mounted bullbar, the G63 is simultaneously a subpar vehicle for tackling trails and clipping apexes. And yet, I’m smitten with the body-on-frame SUV as I push its immense mass through the winding desert roads and dirt-covered turnoffs just east of San Diego.

Mercedes isn’t ready to divulge how many pounds the model packs, but if the redesigned G550’s 375-pound diet is anything to go by, then the G63 ought to clock in at approximately 5,500 pounds. Or almost a half-ton greater than the mid-size Mercedes-AMG E63S sedan.

The G doesn’t hide its heft, either, and this big box has an inevitable tendency to keel and drag its front wheels at the limit. As with its predecessor, the new G63 provides the nostalgic sensation of driving a vehicle from a bygone era: the steering is slow and numb, the brake pedal is rather wooden, and there is copious amounts of body roll.

Still, there’s an innate charm to the G63, and the second-generation model boasts a new-found sense of confidence in its controls that improves its agility without sacrificing its allure. In place of the prior model’s vague, hydraulic-assist, recirculating-ball steering system, the new G comes equipped with a modern electric-assist, rack-and-pinion setup that builds weight naturally and does away with the old SUV’s Grand Canyon-sized on-center dead spot. Likewise, the brakes apply force progressively, while an independent front suspension system, which replaces the previous model’s live unit, and six-inch wider front and rear tracks allow the new G63 to grip the asphalt without feeling as though it’s on the verge of tipping over.

The real magic, however, rests underhood. Subbing in for last year’s twin-turbocharged 5.5-liter V8 engine is a twin-turbocharged 4.0-liter V8. In spite of its smaller displacement, the hand-built bent-eight packs an extra 14 horsepower and 66 pound-feet of torque over its forebear. The stable now houses 577 horses, while 627 pound-feet of twist is available at a low 2,500 RPM.

Mercedes claims the trot to 60 mph takes 4.4 seconds – 0.9 seconds ahead of the prior G63 and equal to that of the Mercedes-AMG GT53 4-Door. Top-speed stands at an electronically limited 137 mph, but, an available Driver’s package can push the G63 to 149 mph. Fuel economy figures remain under wraps, but it’s safe to assume the G63 will gulp gas at a greater rate than the G550, which the EPA rates at an unremarkable 13 MPG city, 17 MPG highway, and 14 MPG combined.

The powertrain evinces a Jekyll and Hyde duality, and the V8 engine is equally as happy to lope around at low speeds in San Diego traffic as it is exploding toward its 7,000-RPM redline on the long straights surrounding Anza-Borrego Desert State Park. These qualities are further exacerbated by way of the SUV’s drive modes, which include Slippery, Comfort, Sport, Sport Plus, and Individual settings (the latter of which allows the driver to mix and match the various drive settings into one drive selectable option). I tend to leave the G63 in its softer Comfort setting, although more vigorous sections of the drive compel me to occasionally swap to the racy Sport Plus mode for its additional steering weight, stiffer damping, and snappier throttle response and gear changes.

The Goodyear Eagle F1 tires are robust on tarmac, but are feeble contraptions on unpaved surfaces.

There’s no point in taking the G63 off-road, though, as the AMG model lacks the rubber needed to take advantage of its three-locking differential (center, front, and rear), low-range transfer case, and 9.5 inches of available ground clearance. While the 22-inch Goodyear Eagle F1 tires are robust instruments on tarmac, the sticky shoes are feeble contraptions on unpaved surfaces.

Instead, I acclimate myself with the off-road prowess of the Geländewagen from the tiller of a 416-hp G550 wearing 18-inch Falken Wildpeak A/T3W tires. Toiling across the dusty roads and puttering over the jagged rocks that line Ocotillo Wells State Vehicular Recreation Area is as simple as brewing a cup of instant coffee. With the center-differential locked, the G550 bullishly climbs its way up steep hills and through soft sand without protest. My only jobs are to steer the Benz-badged box away from protruding rocks and to be judicious with the throttle when going downhill, as the G-Class forgoes a hill-descent control system. (Fortunately, with low-range engaged, first-gear offers plenty of engine braking to effectively negate the need for such a system.)

With a proper set of tires, the G63 is sure to best the G550 on the rough stuff. Thank the trio of off-road drive modes (Sand, Trail, and Rock) that are exclusive to the AMG.

Regardless of the terrain below, both G-Class models coddle their occupants in cosseting interiors. Credit a 1.6-inch longer wheelbase and a 4.8-inch wider cabin that allow the German SUV to offer an additional 1.5 inches of leg and shoulder room to front occupants and an extra 5.9 inches of legroom and 1.1 inches of shoulder room to those occupying the three-across, 60/40-split folding rear bench seat. In conjunction with modern features such as a push-button start system, a 12.3-inch infotainment screen, and a folding armrest for rear passengers (finally), the G-Class now offers the comforts expected in a vehicle donning the three-pointed star.

Options are many, and the G63 I helm includes $500 worth of suede-like material on the meaty AMG-specific steering wheel, $850 for a 12.3-inch digital gauge cluster (an analog speedometer and tachometer come standard), $1,300 in Black Flamed open-pore Ash Wood, a $1,500 carbon-fiber engine cover, $2,300 worth of Cardinal Red Metallic paint, a set of 22-inch multi-spoke wheels for $3,950, and the $7,200 Exclusive Interior Package Plus, which adds a frameless rearview mirror, suede-like headliner, a leather-covered dashboard, heavily bolstered massaging front seats with heating and cooling functions, diamond stitching on the seats and door panels, and special floor mats, bringing the total cost to $166,095 (including a $995 destination charge). Skip the extras, and the cost of entry falls to $147,500 – $23,000 more than the base price of the less powerful G550.

Although the 2019 Mercedes-AMG G63 is a significant improvement over its predecessor, it remains an antiquated apparatus that’s neither a particularly good track tool (there are Mercedes SUVs that work in such a place) nor a device well-suited for exploring unpaved environments (at least without decent rubber). Still, the G63 is the rare sort of vehicle that makes every drive feel like a momentous occasion. Yes, it’s silly, but it’s also divine.