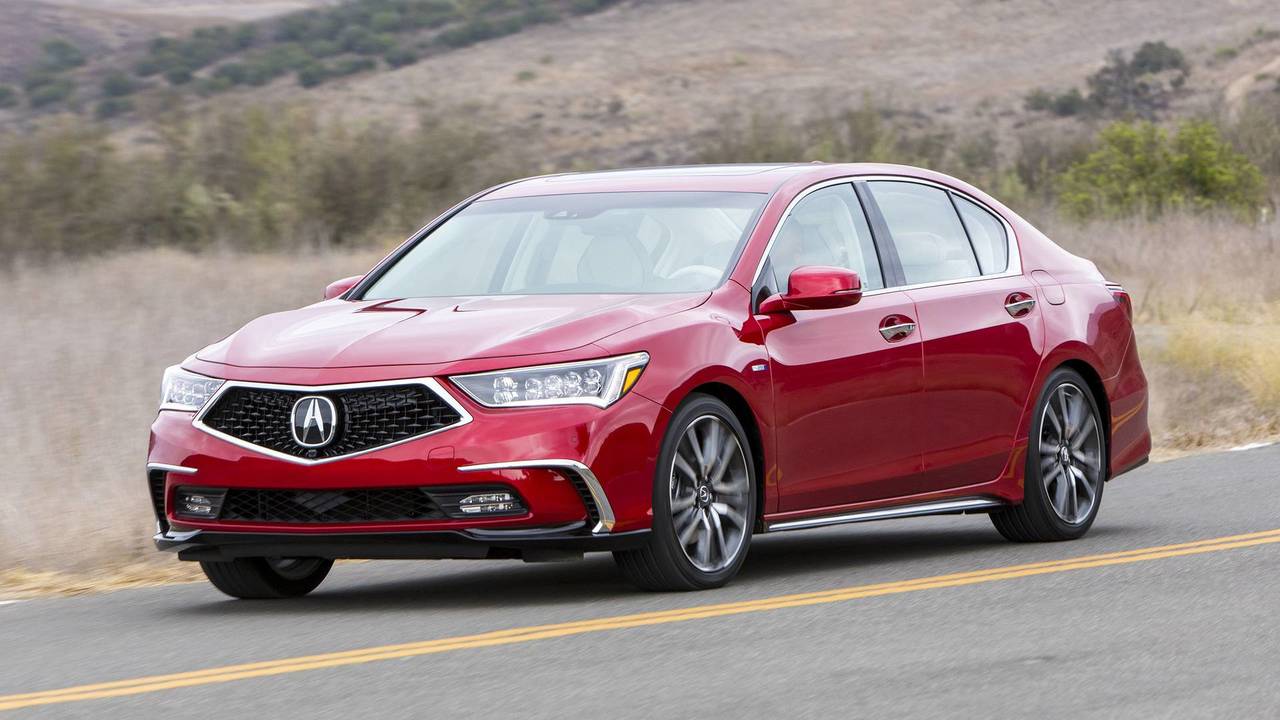 Acura freely admits there were two solid reasons why the RLX Sport Hybrid luxury sedan hasn’t sold very well (it currently accounts for just 13 percent of RLX sales). The first is that the all-wheel-drive hybrid version was quite a bit more expensive than the entry RLX. And the second is that, well, it just didn’t look that great: “The styling and emotion just wasn’t there,” says Acura sedan product planner Jonathon Rivers. So the 2018 Acura RLX has a redesign on the outside, a simplified package structure, and a $4,050 price cut for the Sport Hybrid model. Will that be enough to boost the its popularity?

On looks alone, perhaps. The restyling was thorough, with everything ahead of the A-pillars redesigned, plus new wheels, a new rear fascia, and new side skirts. There’s a whole lot more to draw your eye to the 2018 Acura RLX, from a sharper implementation of the pentagonal grille to the dramatic full-LED taillights out back. Slathered in chrome as it is, the RLX Sport Hybrid still doesn’t exactly scream youthful, but it’s a whole lot less off-putting than the outgoing car, which had that big “beak” grille dominating up front.

The Changes Weren't Enough To Save It:

The hybrid powertrain underhood is familiar from the MDX Sport Hybrid. Acura even hopes you’ll note the similarities to the hybrid setup in the NSX supercar; though there are a few shared parts, the two cars are very different. Regardless, the RLX mates a 310-horsepower, 3.5-liter V6 engine with a 47-hp electric motor/generator and seven-speed dual-clutch transmission up front. Then in back, you’ll find two more electric motors (good for 36 hp each) to provide torque-vectoring all-wheel drive. In total, 377 hp is available when all power sources work together.

Slathered in chrome as it is, the RLX Sport Hybrid still doesn’t exactly scream youthful, but it’s a whole lot less off-putting than the outgoing car.

The hybrid setup delivers swift, slick power. The low-speed assist from the electric motors smooths out any stop-and-go clunkiness sometimes associated with dual-clutch gearboxes, and there’s plentiful torque for passing when all three motors are working. Acura’s V6 engine loves to rev and trumpets sonorously while doing so, and it sounds especially rorty from outside the car. But driven eagerly on twisting roads, the powertrain always feels a beat behind my inputs. It takes just a split second too long for power to come back when I dip into the throttle. It’s a strong, eager performer, but this is a car best driven at six-tenths or below.

In those more everyday driving situations, the RLX Sport Hybrid a quiet, competent gem. It accelerates predictably and will shut the engine off readily when cruising to save fuel. Little wind or road noise enters the cabin, and the chassis glides above road imperfections easily. An expansive view in all directions almost obviates the need for the 360-degree camera system. And in the back seats, there’s a generous amount of head- and legroom for adult passengers.

Sure, its steering feel is lacking, and the connection between three-spoke wheel and front tires a little imprecise, but that’s not what this car is about. Perhaps most welcome is the easy-to-modulate brake pedal, which avoids none of the usual tell-tale signs (vagueness, long travel) of some hybrid vehicles.

The low-speed assist from the electric motors smooths out any stop-and-go clunkiness sometimes associated with dual-clutch gearboxes, and there’s plentiful torque for passing.

Changes inside the 2018 RLX are mostly limited to a smart new espresso leather trim treatment. All the available interior color choices look smart and come with soft, premium-feeling leather. Also new this year is Traffic Jam Assist, which at speeds below 40 miles per hour supplements the lane-keep assist by helping steer, brake, and accelerate in congested freeway traffic. The RLX is the first Acura with this technology.

One of the most important numbers for the Sport Hybrid is its EPA fuel economy ratings of 28 miles per gallon city and 29 highway. That’s a big improvement over the regular RLX, which offers up 20/29 mpg in EPA tests. That model has the same 3.5-liter V6 engine but without the hybrid system. Its power is routed only to the front wheels, via a ten-speed automatic that replaces last year’s six-speed.

Not all is improved on the 2018 RLX, though. To shrink the physical size of the battery pack and cut its weight (by 8.2 pounds), Acura also reduced its energy capacity by 0.2 kilowatt-hours, so fuel-economy ratings are actually a little lower, by 1 mpg city and highway, than the 2017 Sport Hybrid. That battery pack still reduces trunk space by 2.9 cubic feet compared to the base RLX. And because it’s positioned behind the rear seats, it blocks the trunk pass-through, further cutting practicality. (The MDX Sport Hybrid is available for buyers who need more space.)

The car’s infotainment is also still a big frustration. With a touchscreen mounted low on the center stack and a knob-controlled secondary mounted up top, it remains tricky to remember which display shows and controls which features. Low-resolution navigation map graphics and a convoluted menu structure are a chore to use. The RLX also lacks Apple CarPlay, Android Auto, and wireless phone charging; Rivers notes that the car’s buyers average 61 years old, so the company declined to spend money on adding those connectivity technologies.

As mentioned up top, pricing has come down considerably. Where the RLX Sport Hybrid used to be sold in the Tech trim level from $59,950 and Advance trim level from $65,950, there’s now just a single configuration, the RLX Sport Hybrid Advance that costs $61,900. In other words, buyers now get more features for less money. Those standard features shame what you’ll find as standard on some rival German cars: remote start, LED lighting, a color head-up display, a 360-degree camera, cooled front seats, heated rear seats, a heated steering wheel, and so on.

The non-hybrid 2018 Acura RLX also has been simplified from one trim level to two. There is now only a Tech trim level for that car, from $54,900. Standard goodies include rear-wheel steering, LED headlights, pushbutton start, navigation, and Traffic Jam Assist.

No matter its price, does the RLX still resonate with shoppers? It’s easy to write off this type of luxury sedan as a dying segment as customers cross over to SUVs, but Rivers is eager to reiterate, as he did earlier this year at the launch of the new TLX, that Acura sees continued demand for this class. The company’s data show traditionalist buyers still favor three-box cars like the RLX.

“We know that this is still a vital segment, not just for us but for others,” he says. “There’s still a very specific customer for these premium sedans.”

That may be so, but who exactly is the customer for an RLX Sport Hybrid? The car is, at least, competing in a class of one: none of its direct competitors offer an all-wheel-drive hybrid. And, compared like-for-like, it offers more equipment for less money than its German and Japanese rivals.

Yet a luxury car cannot live on the value-for-money argument alone. While it’s pretty much without fault, the 2018 Acura RLX Sport Hybrid also is pretty much without that One Great Thing you’d tell your friends about. It’s a very nice car, but not an exceptional one. With so many wonderful sedans competing against the RLX in this segment, that’s a problem.