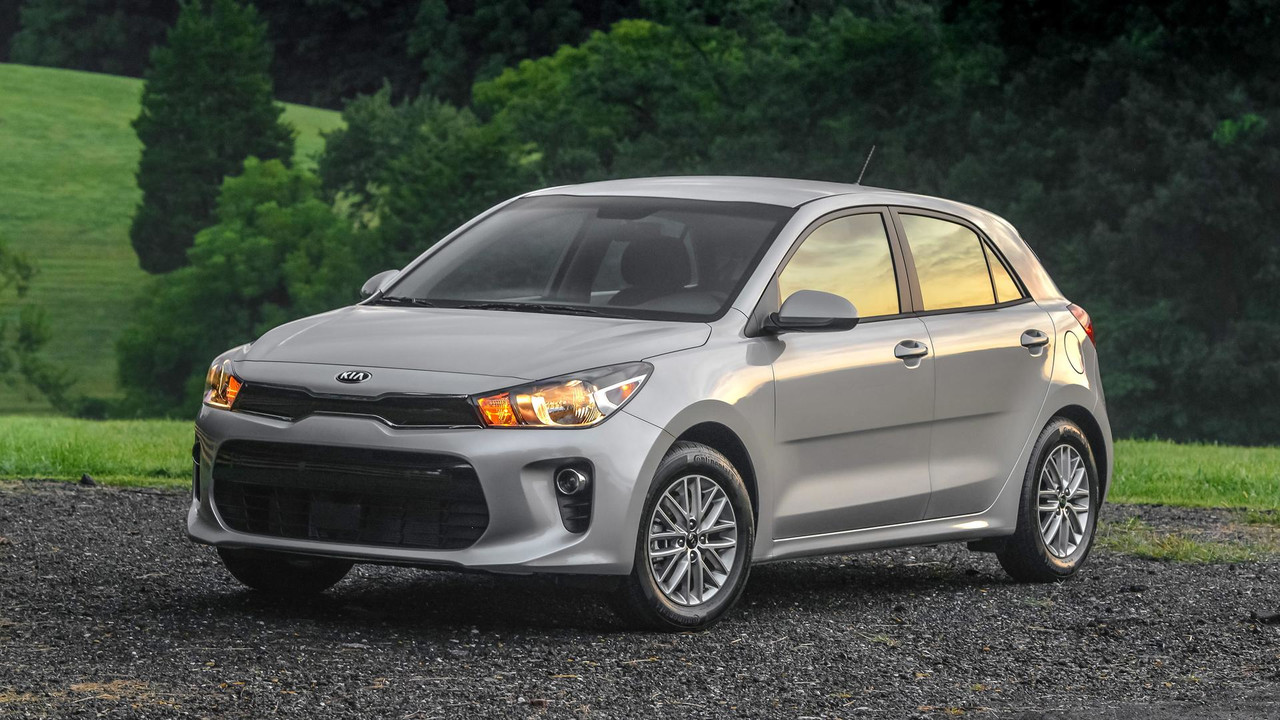 The cheapest Kia is anything but.

You know what sucks? That the majority of the cars out there don’t. Which is why it’s frustrating to admit that even $14,000 cars can be really damn good. And that brings me to the all-new 2018 Kia Rio.

As a member of the diminutive B-car segment, the South Korean automaker’s fourth-generation econobox is less econo and not really much of a box either. With a fleet of early production test vehicles, Kia let me loose in the lolling Maryland countryside northwest of Baltimore. And like the lush green landscape, the little Rio had the power to surprise in a big way.

From a numbers standpoint, the “enhanced” but carryover 1.6-liter four-cylinder gasoline engine loses some horsepower (from 138 to 130) and torque (from 123 to 119), and the lightest Kia Rio gains about 154 pounds. But does any of this matter? Not in the slightest. The engine’s torque now peaks at lower rpm compared to segment competitors. According to Kia, this is based on the type of driving the Rio will likely experience most often: city traffic. Offering more responsiveness around stop-and-go downtown drives makes sense for a vehicle generally seen as a commuter. On long drives, however, this littlest Kia performs just as well.

Offering more responsiveness around stop-and-go downtown drives makes sense for a vehicle generally seen as a commuter. On long drives, however, this littlest Kia performs just as well.

For a four-banger, the engine note is not whiny. Foot-to-floor antics aren’t going to win you any drag races but the engine does provide a solid “I support you” sound as opposed to a “Oh, God, why are you trying to go faster?!” plea. There also is a Sport mode but it seems more placebo than anything. When activated, there’s a change to the throttle and shift points, meaning higher engine revs before upshifts, but that’s it. In other Kia models, Sport mode can also adjust the steering (i.e., heavier feel), but that is not the case in the Rio. Stick to keeping it off for less rpm whine as the vehicle handles fine as-is.

Available with either a six-speed manual or automatic transmission, the Kia Rio also comes in your choice of sedan or hatchback configurations. With the automatic, the drivetrain’s happy place seemed to be at about 2,250 rpm. While the transmission shifts aren’t liquid smooth, there are no erratic lunges between gears. And like the Sport button, manual mode is there if only to simply exist. I tried it. It was fine. But why put in the effort when there isn’t a third pedal? EPA-estimated fuel economy figures are 29 city, 37 highway, and 32 combined when equipped with the manual, while automatic transmissions are rated at 28/37/32 miles per gallon, regardless of body style.

The new suspension geometry underpinning the Rio is noticeable as the vehicle showcases little body roll and the steering is surprisingly precise – a pleasant fact in a segment few auto nerds care about. As for the updated engine, it’s quiet. In fact, the whole driving experience is relatively quiet, in fact moreso than even some larger vehicles. Using more structural adhesives and spot welds not only added to the stiffer (and funner) dynamics but also improved the vehicle’s noise, vibration, and harshness (NVH) rating.

Foot-to-floor antics aren’t going to win you any drag races but the engine does provide a solid “I support you” sound as opposed to a “Oh, God, why are you trying to go faster?!” plea.

The 2018 model sits on one the longest wheelbases amongst subcompacts at 101.6 inches. Extending to 172.6 inches is the sedan and 160.0 inches for the hatchback, which represents a 0.6-inch increase over the outgoing model. A barely noticeable 0.2 inches is shaved up top but added to the hips, but it’s the updated design that keeps the Rio looking fresh rather than funky.

Kia’s signature “tiger nose” grille remains in its familiar position but is updated with a shiny black insert in place of the mesh piece (EX only). The new headlights are pulled farther back while fog lights are repositioned higher and outwards for a wider appearance. A larger front fascia opening and more aggressive lower lip give the Rio a hangry look as opposed to the previous model’s rather soft and bubbly demeanor.

Oddly enough, the outside mirrors have been moved from the door to the A-pillar. It’s an interesting strategy as many automakers have done the opposite. Visibility is generally improved thanks to the larger gap created when the mirrors are placed on the door panel. Nevertheless, overall visibility was fine but not without the occasional blind spot thanks to a large C-pillar panel, at least on the hatchback.

A larger front fascia opening and more aggressive lower lip give the Rio a hangry look as opposed to the previous model’s rather soft and bubbly demeanor.

The rear is completely redesigned and features a sleeker, more aggressive look. From the side, the Rio’s profile showcases noticeable larger windows and a bold character line with more a pronounced and chiseled lower door frame. I like it. The Rio is still a B-car but with grown-up flashes.

The interior receives quite the overhaul as well. Materials are updated and feel more upscale. Even with plenty of plastic surfaces, the general feeling is more premium than cheap. Center stack buttons have been consolidated while climate control knobs are now larger, and the dash features a more slender appearance and creates more knee room, which my six-foot-three driving partner was thankful for. Still a cozy cabin for him, but nothing uncomfortably so. And even though the standard equipment of a base model LX sedan includes the usual suspects of bargain-bin parts like 15-inch steel wheels with covers, manual windows, and black-not-body-colored door handles and outside mirrors, I can’t imagine the look and feel of the interior being that much different between the trim levels.

The seats in the Rio were said to be updated with better foam, and throughout my daylong drive not once did I feel fatigued. Not overly bolstered but well cushioned, the cloth interior should make any drive a tolerable one.

Overall, the Rio’s interior offers a clean, minimalistic appeal but, really, how fancy is a $14,000 car supposed to be?

Moving up to the volume model S, you get the more fashionable body-colored exterior treatments plus keyless entry, cruise control, Bluetooth, and power windows and outside mirrors. The top-level EX seems the way to go, though, because you get 15-inch alloy wheels, a tilt-and-telescopic steering column, a 3.5-inch supervision meter cluster display, and a seven-inch UVO3 infotainment display to replace the four-inch audio one in the lower trims.

Android Auto and Apple CarPlay are part of this UVO system, which itself is one of the most responsive touchscreens I’ve experienced. Maneuvering from screen to screen is as quick as any smartphone. There is essentially zero delay between selecting a command and its operation. Also, the screen’s matte finish is a nice touch to fend off oily fingerprints and doesn’t wash out the screen when wearing polarized lenses. It’s worth pointing out, however, that this new “floating” screen appears clunkier in photos than it actually is.

Overall, the Rio’s interior offers a clean, minimalistic appeal but, really, how fancy is a $14,000 car supposed to be? Safety features are the same across all trim levels except for a rearview camera starting on S trims as well as EX-only high-line tire pressure monitoring (LX and S are low line), automatic braking, and forward collision warning. Otherwise, the Rio is equipped with the standard federally-mandated number of airbags, child safety seat anchors, ABS, ESC plus hill assist and vehicle stability management. I do wish the Rio had blind spot monitoring, which really should be standard for all vehicles regardless of size.

Scheduled to go on sale later this year (full production is slated for October), complete pricing is not yet available but Kia says the new Rio will be a little cheaper than last year’s car. The LX sedan 6MT costs $175 less at $13,990, and because the five-door is now available with a manual, its price drops $1,205 to $14,290. As a reference, the basic Toyota Yaris runs $15,635 and Nissan Versa Note $15,480.

With the average new-car transaction price now an eye-popping $35,000, having to opt for a sub-$20K vehicle (because budgets) doesn't have to mean sacrificing fun, features, and flash. The all-new Kia Rio, even at its priciest, is a strong performer and easily one of the smartest buys in the market.