2017 Honda Clarity Fuel Cell First Drive: Just unlike everything else

Stopping at a gas station? Maybe rethink that.

When we drive gas cars, there are so many assumptions baked into the experience that it can be difficult to strip them away and see what's really going on. The billions of dollars that have been spent on infrastructure to make sure that you can refuel your car at $2.50 a gallon, the wars and environmental suffering required to secure the oil, all of it remains hidden to most people, most days. A car like the hydrogen-powered 2017 Honda Clarity Fuel Cell can, if you let it, force you to think about what's happening behind the scenes. After all, there’s nothing at an average gas station that you can use to help power the Clarity Fuel Cell. How many cars can you say that about?

If you were to borrow your friend’s Clarity without discussing the powertrain, you might make that mistake. There's something unremarkable about the Clarity. Tone down – by only like 10 percent – the slightly-from-the-future design, and this thing wouldn't attract any attention on any highway, anywhere. And, if you're not paying a lot of attention as you sit in the driver's seat, you won't notice much that's odd, either. This should not be taken as tough criticism, because when it comes to the Clarity – and fuel cell cars in general – there's so much more happening than meets the eye. The real story here is not really the vehicle itself. 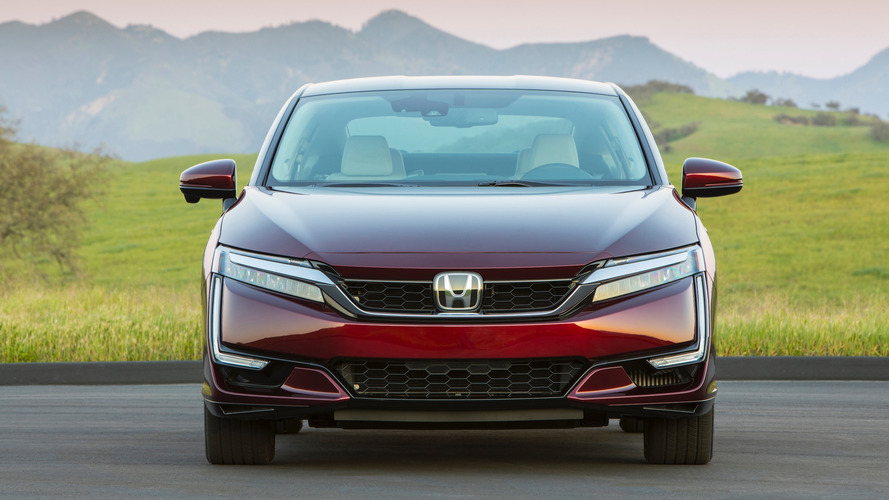 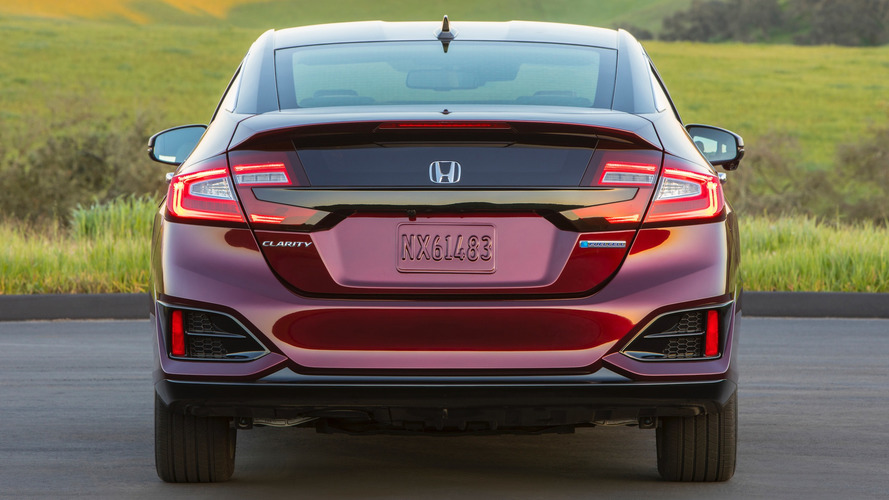 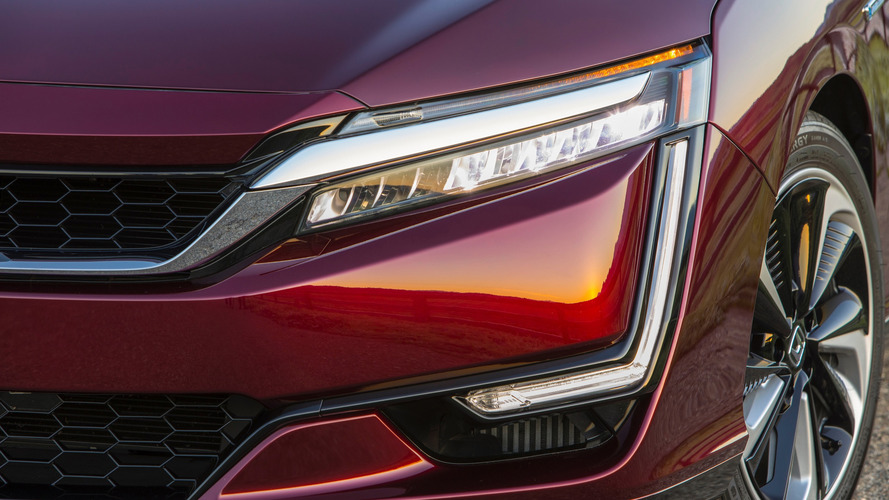 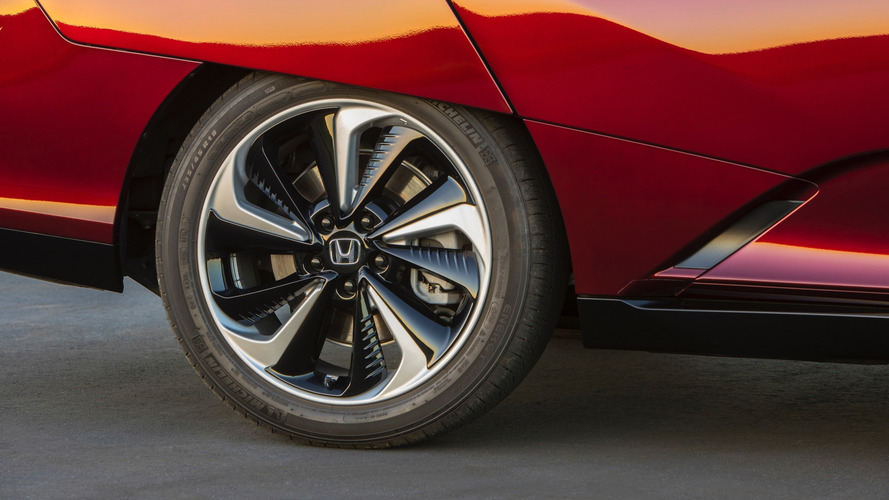 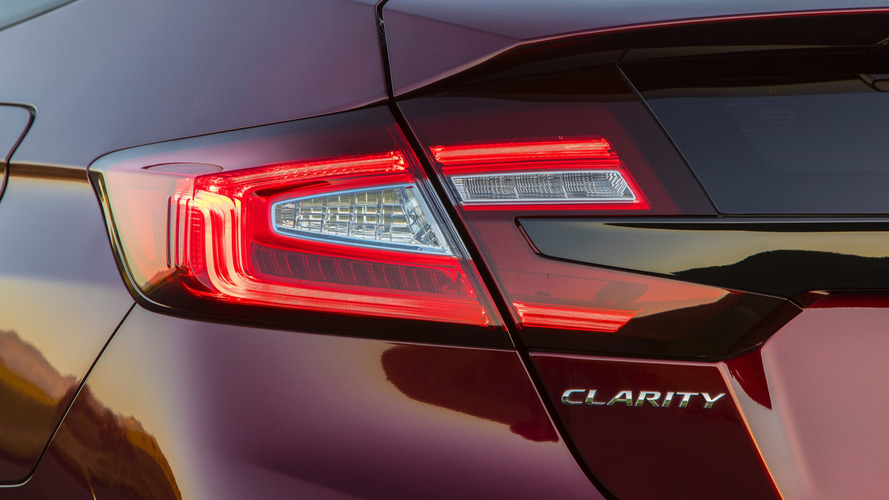 Nonetheless, we’re here to review a car, so let's start with what you can see. For starters, the Clarity is a big sedan, as Honda will repeatedly remind you if you look at the marketing material. The front end is the Clarity’s most future-y angle. There's a nice chrome bar crossing the grille, extending from the headlight to headlight. There's an echo of this bracket-like line in a strip of LED down under the front lights. The large hood – and we'll get to why it's so big in a minute – is not out of proportion to the rest of the vehicle, which is big but not obscene. This is not an econobox electric car, but a full-fledged sedan with plenty of room for five adults. Again, that's all quite unremarkable, right? The rear end is a bit busy, but we can forgive that because the rest of the design is clean enough. All in all, the Clarity's design works well enough, even if it’s a bit controversial. We expect all the Clarity models to look pretty much the same, so props to Honda for finding a look that will work no matter what's under the hood.

Speaking of which, let's clear up the various powertrain options here. Honda is doing something with its Clarity family that no other automaker is even attempting. You can find multiple powertrain types in a number of models (the Ford Focus comes in electric and gas versions, and you can find a Hyundai Tucson that uses hydrogen in a fuel cell or burns fossil fuels in an engine, and the Hyundai Ioniq will be available as an EV, PHEV, or hybrid, to cite three examples), but only Honda is offering one model as a pure electric, a plug-in hybrid, or a hydrogen fuel cell car. The fuel cell is up first, and the others will arrive in the U.S. later this year.

When it comes to the Clarity – and fuel cell cars in general – there's so much more happening than meets the eye. The real story here is not really the vehicle itself.

Inside, the Clarity feels like it has oceans of space, both in the front and rear. There's access to a space under the gear selector that's easily big enough to hold an iPad or large purse. The top of the dashboard, the part that meets the bottom of the windshield, feels like it's a million miles away, and you'll probably be jet lagged when you get there. Filled with angular, somewhat robotic lines, the whole dashboard feels elegant. Except for a mysterious, finger-size circle vent in the top center that, truth be told, both my co-driver and I had to stick our fingers in just to see what was going on in there. It is a weird detail, an exception to the rule that the Clarity feels like an elegant Acura. Heck, the push-button shifter is basically stolen directly from an MDX.

The rest of the parts that you can touch in the 102-cubic-foot passenger cabin are mostly – around 80 percent – covered in eco-friendly materials like Ultrasuede made from recycled components and seats with plant-derived fabric. It all feels right. Environmentally conscious without being all that different than what you'd expect in any other nicely apportioned sedan. Or, well, unremarkable. 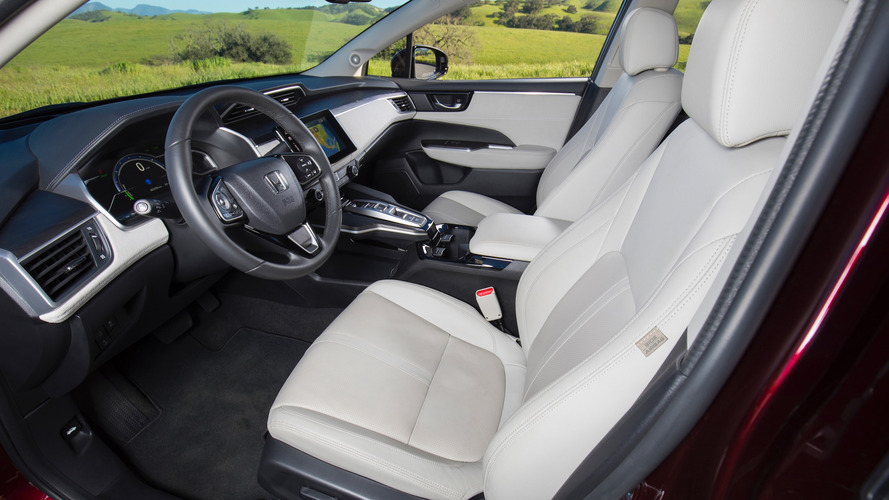 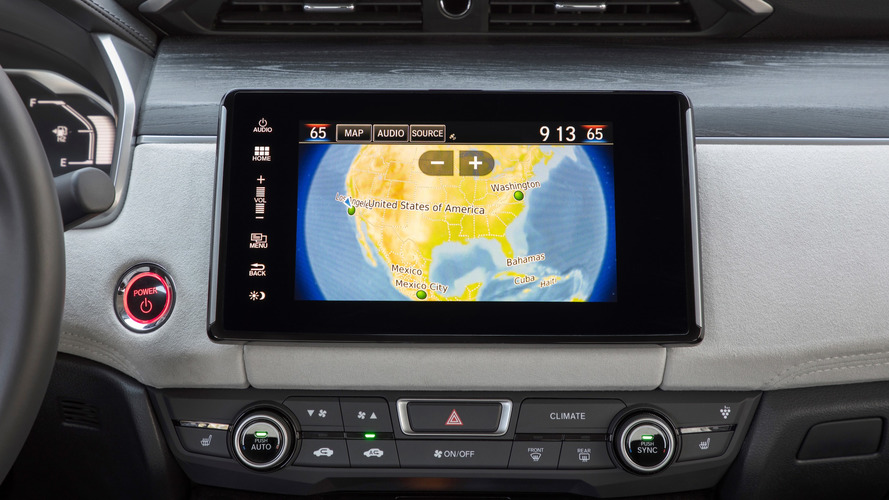 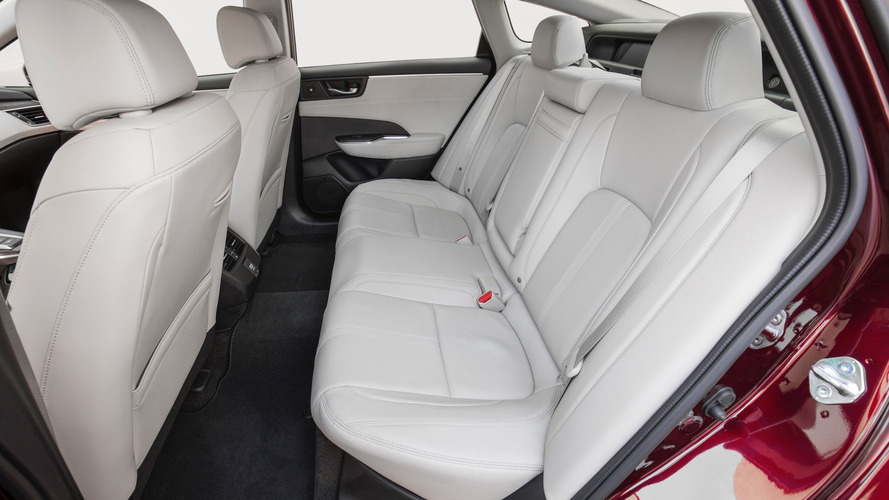 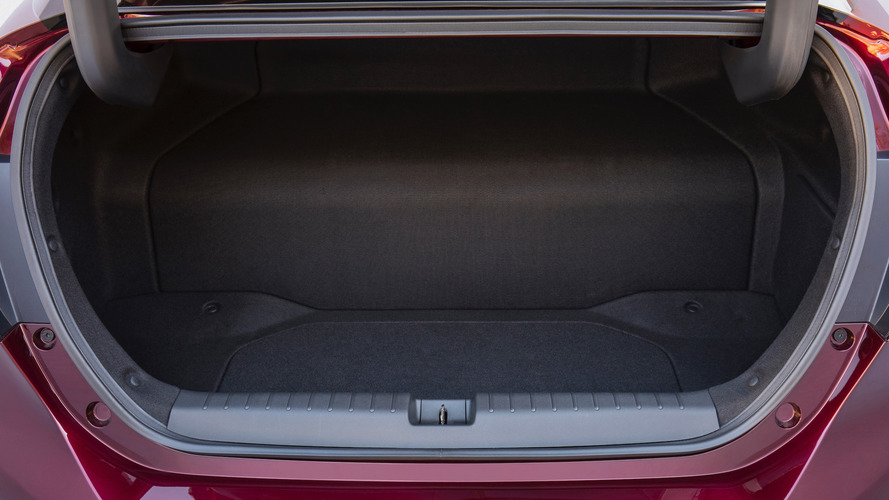 The trunk loses a few points because one of the cylindrical hydrogen tanks takes up a lot of room there, sitting as it does behind the rear seats. A smaller H2 tank lies beneath those seats, because Honda has worked hard to minimize any aspect of the car that would signal that the Clarity Fuel Cell is anything odd. A lot – a lot – of work went into shrinking the fuel cell stack, and it’s now small enough to fit under the hood. In the FCX Clarity, Honda’s previous fuel cell vehicle, the stack sat between the passenger and driver seats. Everything about the Clarity is approaching normalcy.

Still, when you try to figure out the car's efficiency, it's tough to know how to do the math unless you've spent some time thinking about how to convert traditional miles-per-gallon numbers to kilograms of hydrogen per mile. Thankfully, the EPA has done the math for you, and says that the Clarity gets MPGe numbers of 69/67/68 in city/highway/combined tests. If you compare it solely to electric cars, then the 366-mile range might be the number that you care most about.

The Clarity is Honda’s big bet on what’s next, but it’s a vehicle that looks, drives, and refuels a lot like today's cars. This could be the future.

But now let's get to the most impressive, unimpressive part of the Clarity. Driving it feels like any other electric vehicle out there, with solid, linear acceleration. Moving down the street is mercifully quiet, but not a thrilling experience, even in sport mode. If you want to compare the Clarity to a similar hydrogen car, then the Toyota Mirai in power mode feels like it has a bit more pep. The Toyota is a slightly lighter car (4,078 pounds vs 4,134-pounds in the Honda), so perhaps that's why the Mirai's 114-kilowatt solid polymer electrolyte fuel cell stack and 113-kW electric motor (151-horsepower) rewards you a bit more than the Clarity's 103-kW proton exchange membrane fuel cell stack and 130-kW (174-hp) motor do when you step on the accelerator.

Whatever the numbers, this current generation of hydrogen sedans shouldn't be judged solely by their performance. Moving down the road, the Clarity feels strong and confident. There's a lot of car to push around, which means that the (still unspecified) 0-60 time is nothing to trumpet. But the general vibe of the drive is unthreatening and unexciting. It drives like you'd expect a big sedan to drive, just quieter and smoother. This is all fine, since everything else about the car – the fact that you use hydrogen to fuel it up and have to find H2 stations – is so radically different from your average sedan that Honda has kept as many aspects as it could looking and acting just like they would in any other gas car. If you’re expecting LaneWatch and Apple CarPlay/Android Auto, you’re in luck. Those features and a whole suite of safety tech are available, and contribute to making driving the Clarity feel like the Honda you drove to the dealership for your test drive. 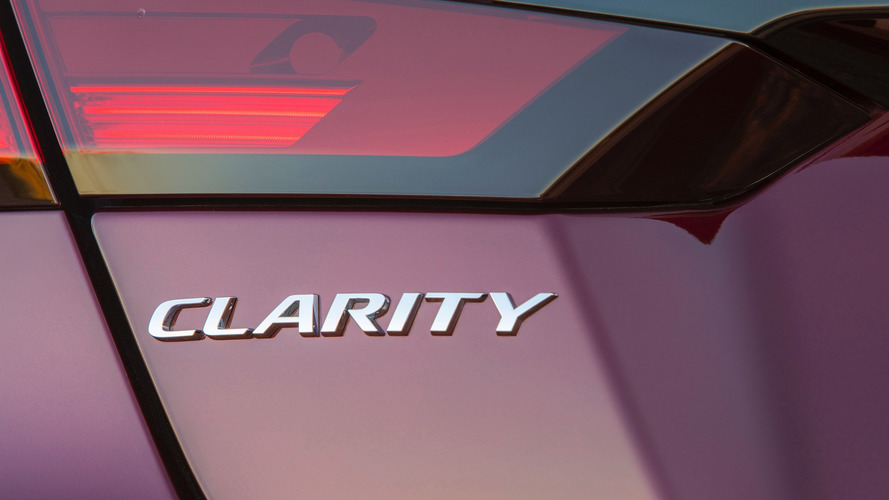 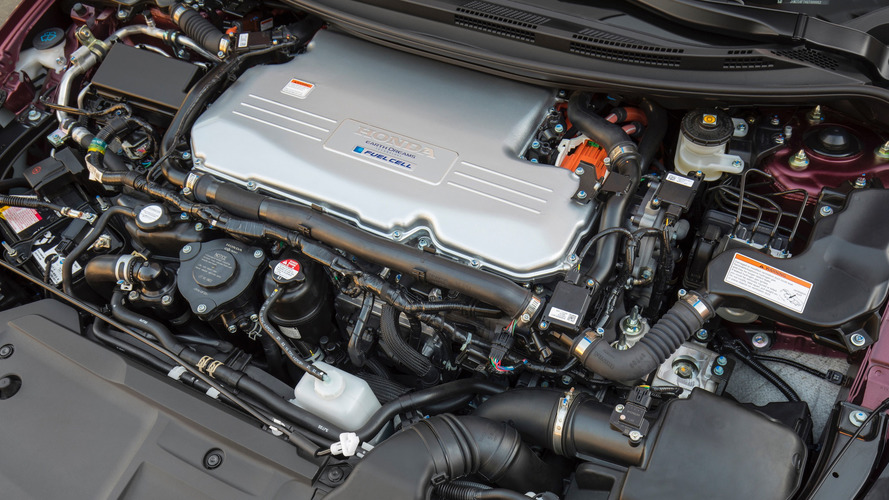 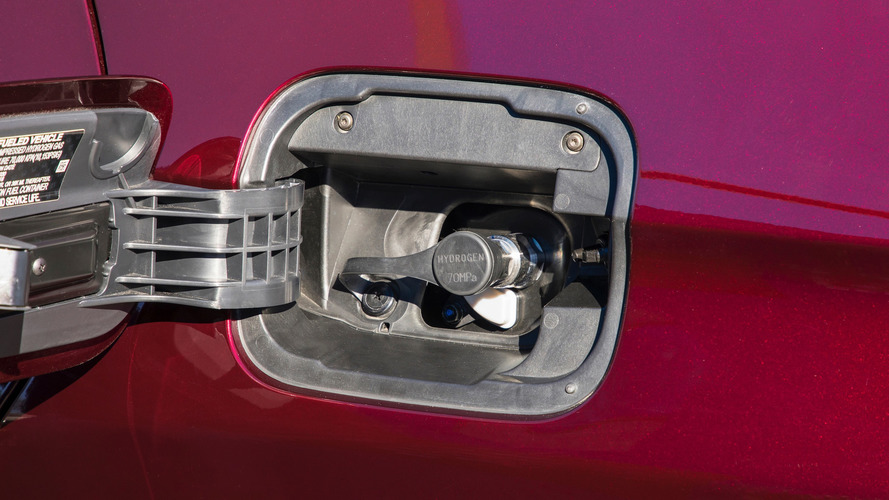 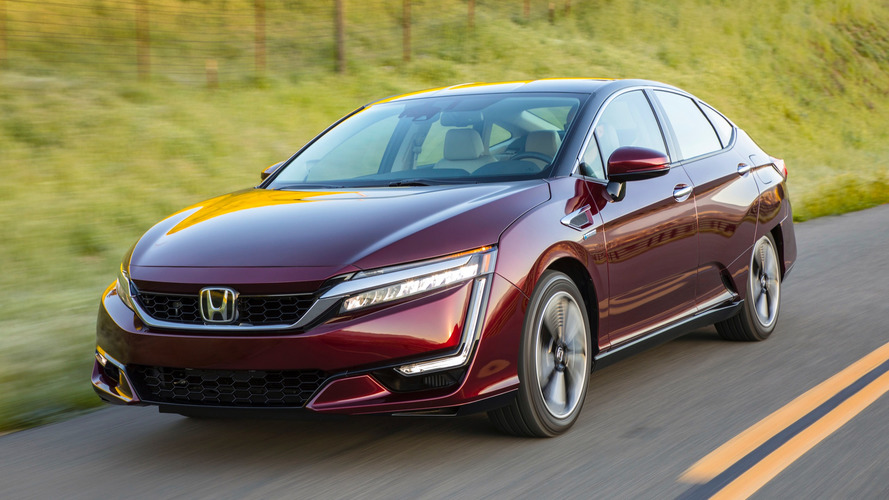 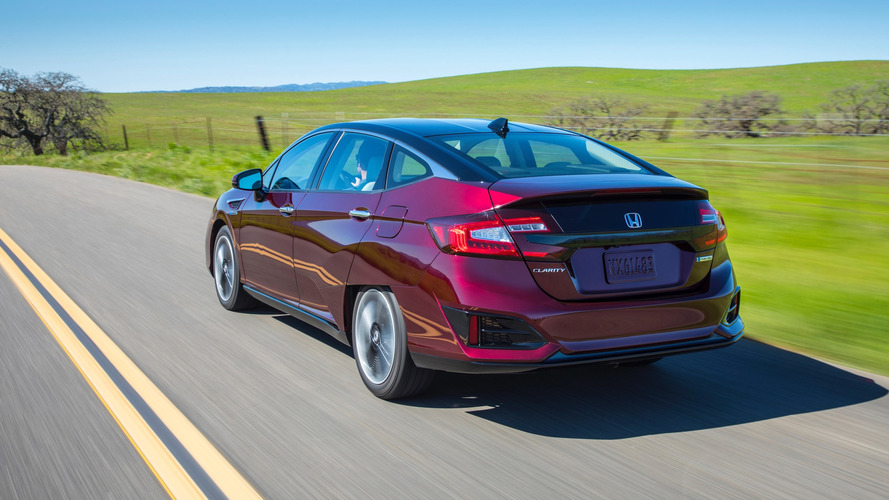 If you decide to get yourself a Clarity Fuel Cell, you can ignore the $58,490 MSRP. That’s because Honda is only offering the hydrogen car as a lease vehicle at 12 select dealers in California. The Clarity leases for $369 a month for 36 months, alongside $2,868 due at signing. The way that you buy your fuel with the Clarity is different, too, since the lease includes up to $15,000 of hydrogen. That sounds wonderful – “free” fuel, yay! – but but since $15/kg in the real world is not unheard of and there are only around two dozen hydrogen stations open in California right now, actually living with Clarity is not going to be the easiest transition for someone who wants to drive tomorrow’s car today.

What Honda's really working on here is not a car. It's the future. The automaker is working with its competition on hydrogen powertrain technology. It's giving $13.8 million in financing to a hydrogen refueling company. This is the kind of thing you need to do if you want to reshape the petroleum-based landscape that currently dominates the automotive industry. Sure, when you choose hydrogen instead of battery-powered cars, there are a lot of the same players involved but that's what Honda predicts we will want in the future. The Clarity is Honda’s big bet on what’s next, but it’s a vehicle that looks, drives, and refuels a lot like today's cars. This could be the future. Think about that for a minute.