Honda’s superb Civic gets an extra helping of functionality and fun-to-drive.

Here’s some news that will shock no one: I like the hatchback best. The tenth-generation Honda Civic is a lovely car in its sedan and coupe forms, but this extra-functional, better-looking five-door wins my vote for the one to buy. And its capacious little butt is only half the reason.

With the hatchback’s launch comes the introduction of new Sport and Sport Touring models, the former of which combines the delightful 1.5-liter turbocharged engine with a six-speed manual transmission, all wrapped up in the most attractive Civic package yet. Of course, these models will only account for maybe ten percent of all Civic Hatchback sales. So it’s a good thing there’s plenty to like about the rest of the lineup, too.

The Civic Hatchback adds a bit of visual differentiation between its two- and four-door counterparts, and I’m not just talking about the rounder rump. Up front, the lower fascia boasts larger faux air intakes (only the passenger-side area allows some air to pass through), with more prominent foglight housings. It transforms the already-slick Civic schnoz into something with a bit more aggressive, and matches the new rear bumper design which, again, has fake air intakes (or outlets, in this case). Sport models get blacked-out exterior elements and 18-inch wheels on 235/40-series tires. Honestly, if you showed me the Sport and told me it was the higher-performance Si model, I’d probably believe you... for a minute. 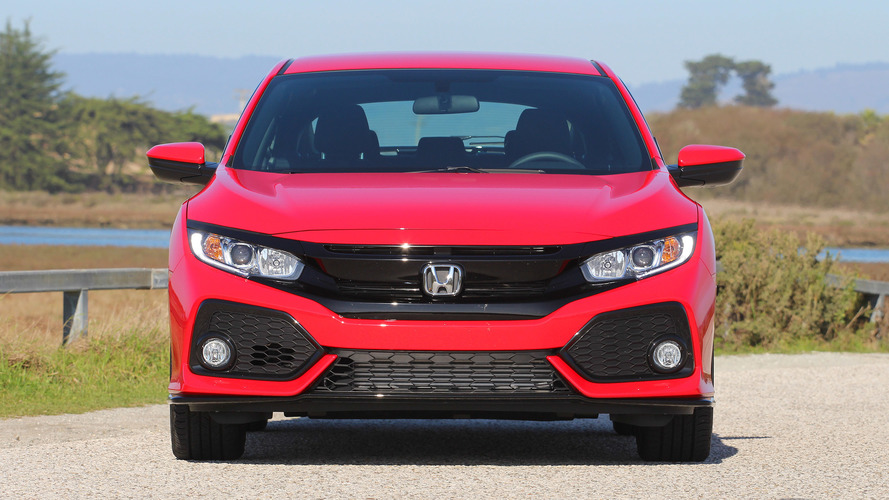 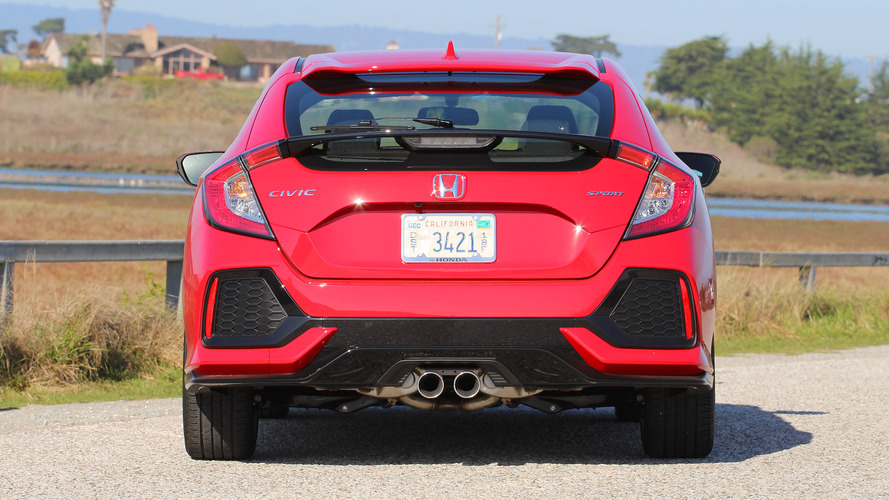 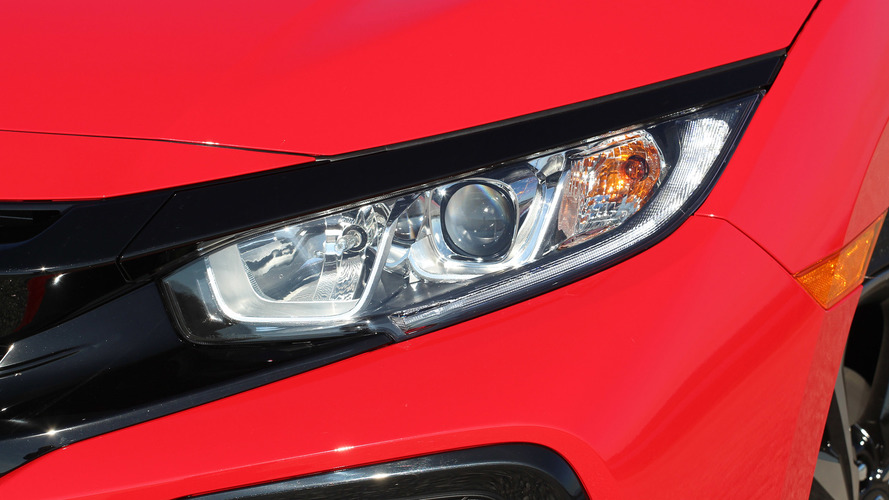 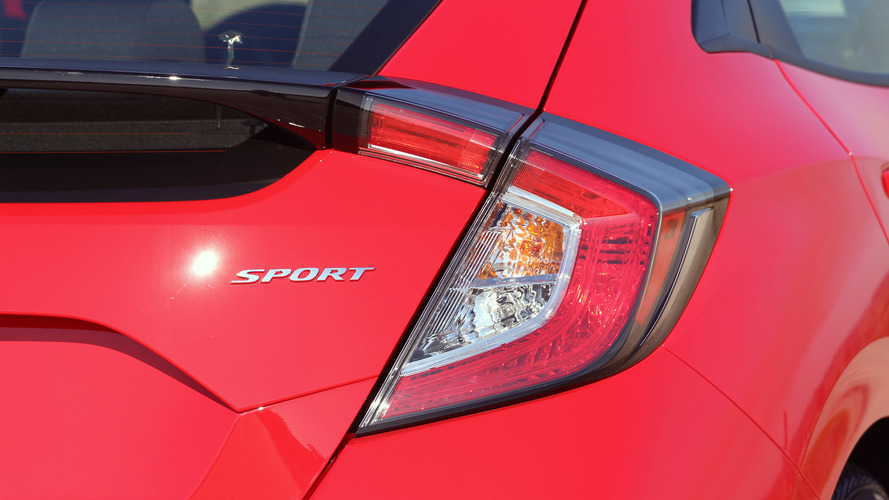 The Sport 6MT you see here is the most powerful version of the Civic Hatchback, with 180 horsepower and 177 pound-feet of torque.

Sport designation or not, all versions of the Civic Hatchback use Honda’s 1.5-liter turbocharged four-cylinder engine, though, confusingly, there are four different output ratings, depending on the model. Sport trims have a different exhaust setup, and there are unique torque ratings for the manual and continuously variable transmissions. The Sport 6MT you see here is the most powerful version of the Civic Hatchback, with 180 horsepower and 177 pound-feet of torque. The high-end Sport Touring makes the same 180 hp, but because it only comes with a CVT, its torque output drops to 162 lb-ft. Mainstream LX, EX, and EX-L models with the CVT are rated at 174 hp and 162 lb-ft, and the very rare, super-base LX 6MT also has 174 hp, but adds 5 lb-ft, for 167. Got all that?

A short drive in a loaded, Sport Touring CVT model showcases the transmission’s refinement. Under hard acceleration while merging onto a freeway or while climbing up the steep hills of Northern California’s winding forest roads, the noise isn’t buzzy or harsh, and the CVT doesn’t drone at higher revs. The emphasis here is on the “variable” part of the CVT logic – it uses the full rev range, making the most of the low-end torque when available, or higher-revving power under hard acceleration. Overall, the engine behavior feels and sounds very natural, like the car has actual gears.

The manual transmission is typical Honda stick-shift magic. The clutch is super light, and takes a minute to get used to, but the gear lever action is rewarding and precise with its quick, short throws. It’s easy to blip the throttle and quickly downshift before a corner, and the light clutch and smooth gear engagement make this six-speed manual pleasant to use while stop-and-going through downtown San Francisco traffic. 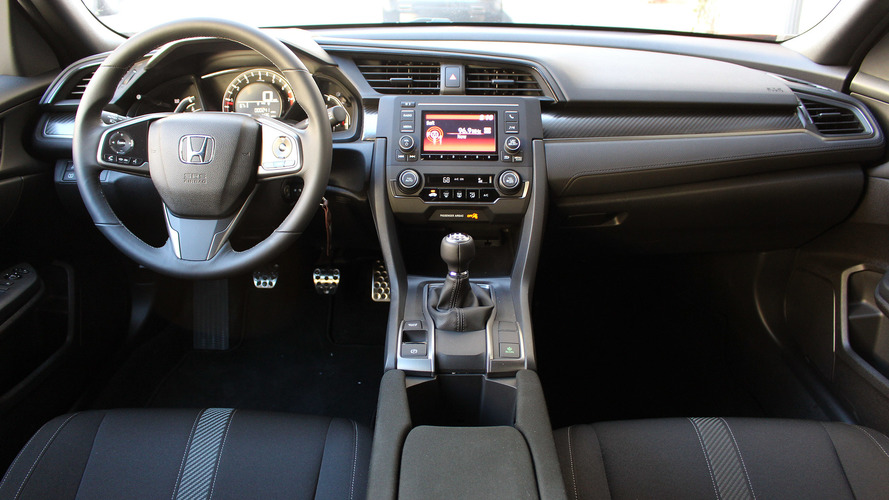 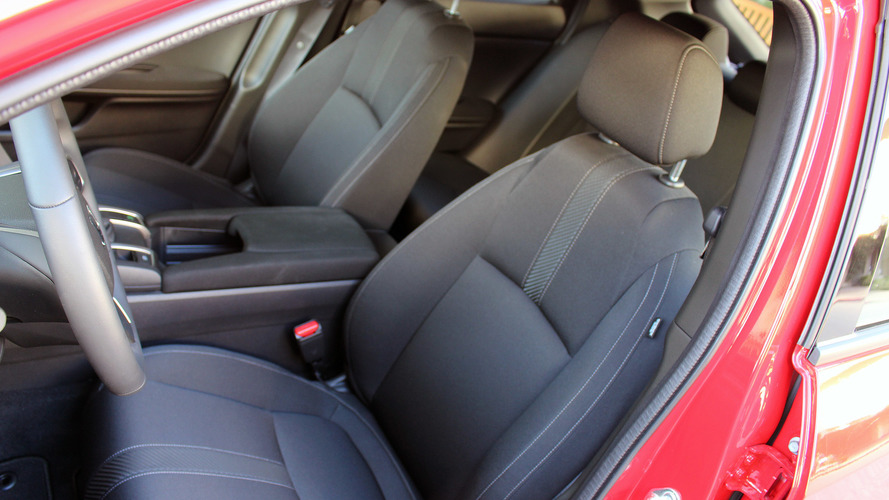 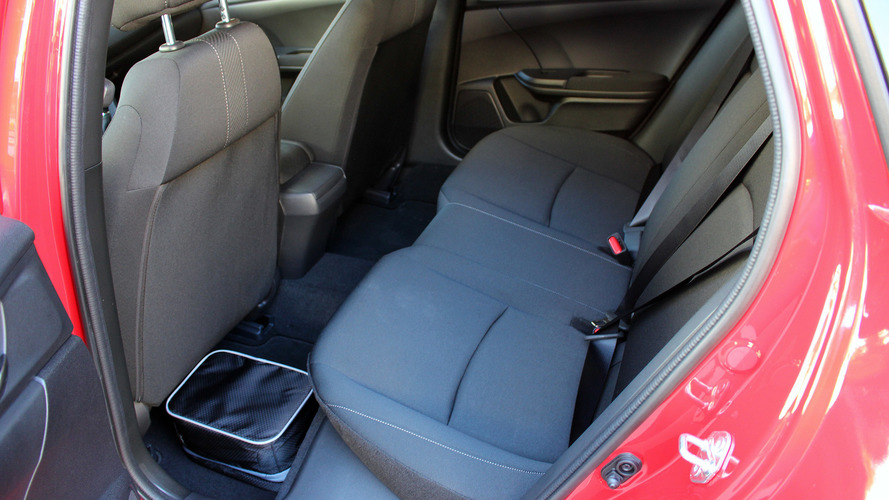 This car has great bones: Supple enough to make highway cruising a pleasant experience, but agile and communicative while being driven with gusto.

Civic hatchbacks have unique steering and suspension tunes that differ from the Civic Coupe and Sedan models; Honda executives will tell you this is the proverbial “Euro-inspired” setup. Makes sense – the hatch will be built exclusively in the U.K. and is the first version of the new Civic being offered to European customers. On the road, the Civic Sport feels more Mazda than Honda with accurate, nicely weighted steering and an overall feeling of lightness to the chassis. This car has great bones: Supple enough to make highway cruising a pleasant experience, but agile and communicative while being driven with gusto.

Those same bits of praise extend to the mid-grade EX and EX-L models, though the Sport’s slightly higher output and more aggressive wheel/tire package help it in the handling department. In any case, the Civic Hatchback rewards its driver with good steering feel, progressive amounts of roll through corners, and an overall feeling of nimble agility.

This Sport trim starts as a base LX model, and adds the aforementioned exterior upgrades, as well as a couple of niceties inside like a leather-wrapped steering wheel and red gauges. But if you want the Sport model with a manual transmission, you have to live with the base radio headunit (no Display Audio infotainment here) and unheated cloth seats.. EX models have the larger touchscreen system with Android Auto and Apple CarPlay connectivity, as well as heated seats, but forego the leather steering wheel. The EX-L Navi wraps everything in leather and adds factory nav, and the Honda Sensing safety suite is available as an option. The Sport Touring has, well, everything, including trim-exclusive stuff like LED headlights and heated rear seats, and the Honda Sensing package. 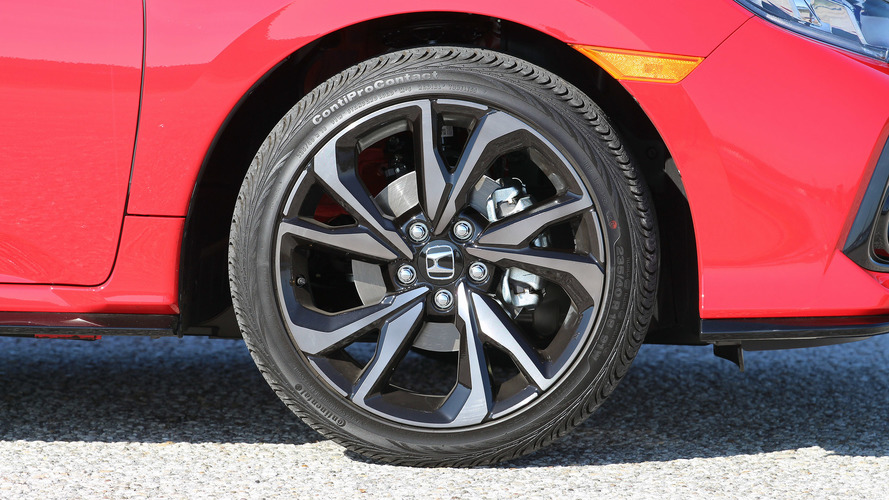 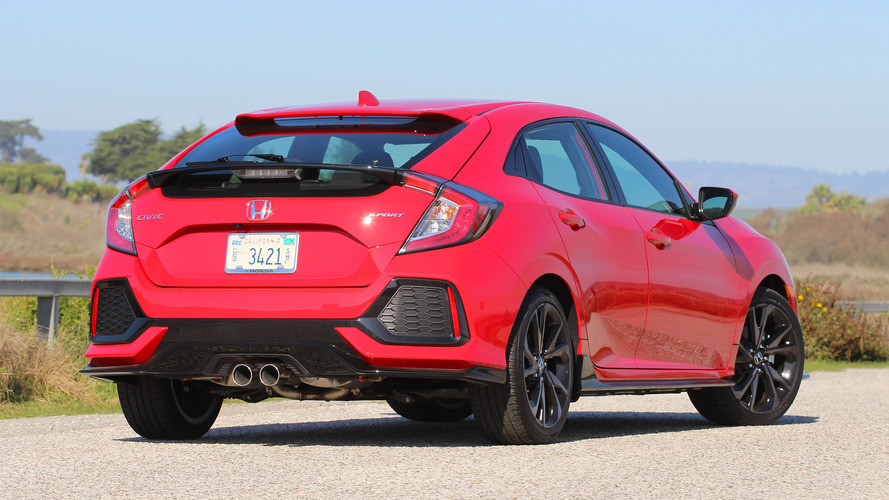 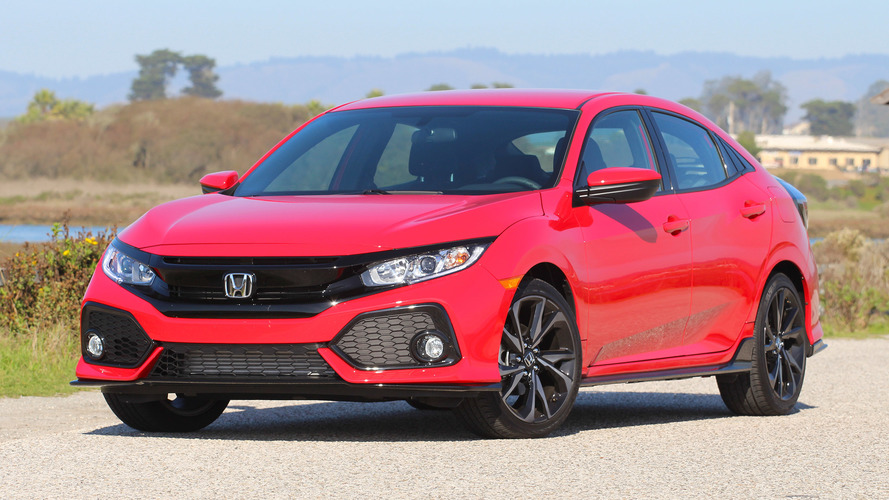 It’s everything I already love about the Civic, with a few icing-on-the-cake enhancements.

The Hatchback’s interior is basically a carryover from the sedan; the cabin feels expansive and premium, with great ergonomics. Around back, the cargo area offers 22.6 cubic feet of space with the rear seats in place, or 46.2 with them folded – that puts it above the Ford Focus, but just below the Mazda3. That said, I find the Honda’s hatch aperture to be wider and taller, for easier loading. Plus, Honda introduces a new, side-mounted cargo cover on the Civic Hatchback – you don’t have to remove the cargo cover crossbar to load bigger items, just slide the cover out of the way. Pretty nifty.

The cost for this added style, fun, and functionality? About $500 more than the equivalent sedan model. The base LX comes in at $19,700 with the manual transmission, the Sport driven here costs just $21,300, and fully loaded in Sport Touring guise with leather, nav, and all the bells and whistles, you’re paying $29,135, including $835 for destination. Yeah, nearly 30 grand is kind of a lot for a Civic, but remember, a similarly equipped Mazda3 hatchback costs $31,000 these days.

To me, the sweet spot for the Civic Hatchback lineup is the mainstream, $22,800 EX, or the less-expensive, better-driving Sport seen here. But no matter the trim, the five-door Civic impresses with its good looks, refined cabin, functional hatch, and good-to-drive demeanor. It’s everything I already love about the Civic, with a few icing-on-the-cake elements that make it, in my mind, the best one to buy.