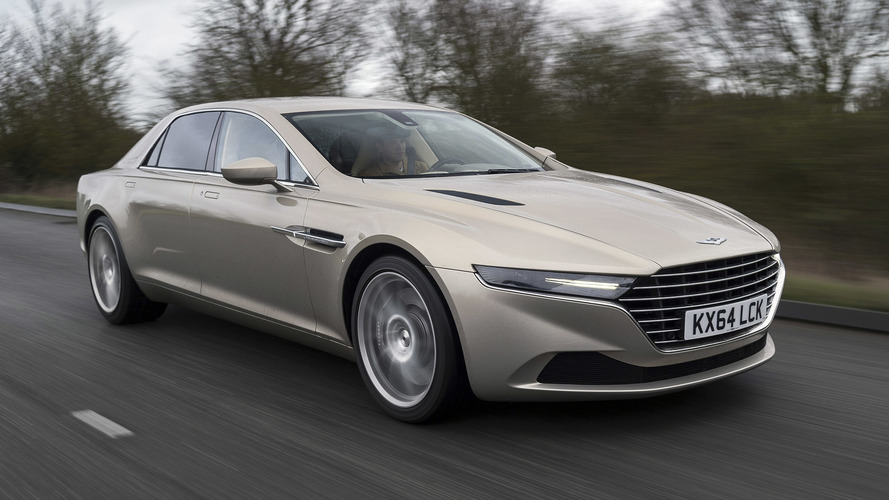 For a moment in time, piercing through Warwickshire in our Topaz Gold Taraf, we were the kings of this soggy island, of the whole of Europe, and of the wheeled kingdoms maybe even. “Remember when you walk through those doors in Gaydon,” Aston Martin chief Andy Palmer tells us referring to the company’s U.K. headquarters, “the sign doesn’t say Aston Martin, it says Aston Martin Lagonda. We need to respect the other half of that equation.”

The Aston Martin Lagonda Taraf is the hyper-expensive kindling that has re-ignited the Lagonda fire after a decades-long absence. An Olympic flame that will burn until the release of the next-gen Lagonda in 2020 or so. Whether that will be a full series-production luxe cruiser, or a sort of sub-brand with a few distinct and cushy models, has yet to be determined. What we do know, however, is this ultra-rare songbird currently bearing the Lagonda badge is all kinds of perplexing, and intriguing, and forbidden anthrax-fruit for our limp bank accounts.

For most mortals, base millionaires, and their sub-species (or sub-sub, if the author is to be accounted for), a car like this is beyond rational grasp. We simply can’t afford one. And if you’ve done well for yourself and can finally get that Ferrari or Bentley, you can’t afford one. If you were featured on American Greed for your clever-until-you-got-pinched scheming, but have a few mil tucked away (shhhh, don’t tell) for when you get out, you certainly can’t afford one.

This ultra-rare songbird currently bearing the Lagonda badge is all kinds of perplexing, and intriguing, and forbidden anthrax-fruit for our limp bank accounts.

In fact, unless you’re an oligarch, dictator, actively planning a successful coup, or have all the members of OPEC on speed-dial, you simply cannot. (Author’s note: If you do happen to fall into that latter category, hit me up, your life sounds pretty interesting and you probably have delicacies in the garage that I want to drive).

So what exactly is the Lagonda Taraf’s proposition?

Simply this: exclusivity. Aston’s luxury flagship sedan has been billed as the ultimate Q car, and indeed the Lagonda Taraf started as just that. One customer’s wish for a unique, extended Aston sedan, turned into many monied customers’ wishes granted. True to Q, each of the nearly 150 Tarafs in existence are one of one, truly hand-built in the facility most recently responsible for the ultra-alluring One-77.

And while Aston would like the Lagonda to be a more exclusive Rolls-Royce or Bentley, it’s still very much a product of Gaydon’s bread-and-butter formula, an elixir that blends design capable of drawing you in, and performance to close. And there are no cheeky V8s here; the Lagonda is part of the old guard, the “no replacement for displacement” crew. Hybrid tech and new-age gimmicks are left for the next era perhaps. Here, you’ve got the boorish 6.0-liter 12-cylinder behemoth, the same V12 that has resulted in many Aston-produced grins in other applications. Mash the throttle and there’s only so much engineers can tame. Unlike with a Bentley or Rolls, there’s no momentary polite-ponder, before obliging to unleash a little fury.

Each of the nearly 150 Tarafs in existence are one of one, truly hand-built in the facility most recently responsible for the ultra-alluring One-77.

While there’s substantial heft, Aston also was mindful of weight. The Taraf weighs about the same as a Rapide, and in fact shares much – from its underpinnings to parts of the interior – with that car. Using a newer iteration of the outstretched VH platform, Aston gave the Taraf full carbon fiber composite body panels. They’re pricey, but hey, you’re shelling enough.

In this application, the V12 boasts a compression ratio of 11:1, pushes 540 horsepower and 465 pound-feet to the rear wheels via an eight-speed ZF automatic transmission, and will hit 60 miles per hour in 4.4 seconds. The car also stores four bottles of bubbly in the Cool Box, making it the one you’ll want to be driven in on New Years. Which raises a fair point, as well. While cars like this are often chauffeur-driven, the Lagonda Taraf is easily the driver’s car of the luxury cruisers.

It can take a corner confidently, acceleration is swift and linear, and while not Aston’s usual symphonic delivery, the engine notes expand into the cabin in correlation with throttle-depression. This Taraf isn’t of the hushed, insulated, get-about-town cruiser-mold that are rolling off the lines in Crewe and Goodwood. The three-stage adaptive damping system boasts Normal, Sport – and somewhat absurdly – Track modes. While tracking a Lagonda would no doubt be silly fun, it’s highly doubtful than any actual customer would. But it’s there, if you do get the urge (again, hit me up).

This Taraf isn’t of the hushed, insulated, get-about-town cruiser-mold that are rolling off the lines in Crewe and Goodwood.

And if one wanted to be driven, there’s plenty of space, you’re essentially cosseted in new leathers and Alcantara – dramatic names gives you an idea of the heart of market – such as Sandstorm Gold Pearlescent, Ivory Gold Pearlescent, and Orchid White Pearlescent semi Aniline, and an Orchid White Alcantara with matching Orchid White Carpet. Opulent. A 1,000-watt Bang & Olufsen BeoSound system will please the ears, and much of the general finery you’d expect is there.

What’s not really there is technology. A 6.5-inch LCD nav screen is included for those that use in-car navigation systems, but the general look and feel for the driver will be very familiar to Aston’s current crop of cars, save for the new DB11. In a way, this car represents the last of the old Aston. Its vintage-cartoony looks blend some of the brand’s new aesthetic with the classic Lagonda’s outrageous torpedo styling. While the front end is thoroughly modern, the C-pillar and rear pay homage to the great ‘70s and ‘80s Lagondas. Aston was also faithful to the wild proportions; the long phallic front end protrudes ahead, while the boxier rear begs further visual engagement.

In pure dollars and cents, the Taraf asks for many dollars and makes little sense. But this isn’t a car for value-minded buyers. A base S-Class has more technology, and you could buy – depending on the exact models – a trio of Bentleys or Rolls-Royces. But there’s also this: on a recent tour of Aston’s French neighbor, at Bugatti’s assembly plant, we learned something mind-boggling. The average Bugatti owner has 42 – forty-two – cars. And 2.7 jets and 1.3 yachts, but that’s another story. Many of these same customers and their acquaintances are the ones shelling out for the high-dollar Aston Martin Vulcan, One-77, and the upcoming AMRB01 hypercar. And these are the same buyers that could tuck in number 43, bearing a Lagonda badge.

In a few decades’ time, this will be the one people point to on the Pebble Beach lawn.

And among those incomprehensible garages are the super and hypercars you’d expect, but also the plush cruisers too. Stand on the right corner in Monte Carlo or Beverly Hills during peak lunch hour, and you’ll see a half-dozen Continentals and Phantoms. They almost, obscenely, blend into the scenery, like bumblebee cabs in New York, and red double-deckers in London. A Lagonda, however, will turn heads, if for nothing else, its novelty. It will be a conversation piece in that garage of envy, and it’ll be the only one of its kind at the valet.

Aston tells us there are currently “two or three Tarafs in the Americas.” We could guess one is in Mexico, Chile, Brazil, or Canada. That would leave one or two in the U.S., meaning the odds of yours being the one in Los Angeles, New York, or Miami, are unreasonably high.

We know the next Lagonda will be intriguing; we’ve glimpsed what the new Astons will look like with the DB11, and we know they have a few aces in the design bullpen that ensure if nothing else, our eyes will approve. And now too with its Daimler electronics and bits, and new lighter architecture, they will be modern, and advanced. This Lagonda however, is the last of its kind, an Audemars Piguet in an Apple Watch world. In a few decades’ time, this will be the one people point to on the Pebble Beach lawn, the elusive oddity that was the last of its kind.