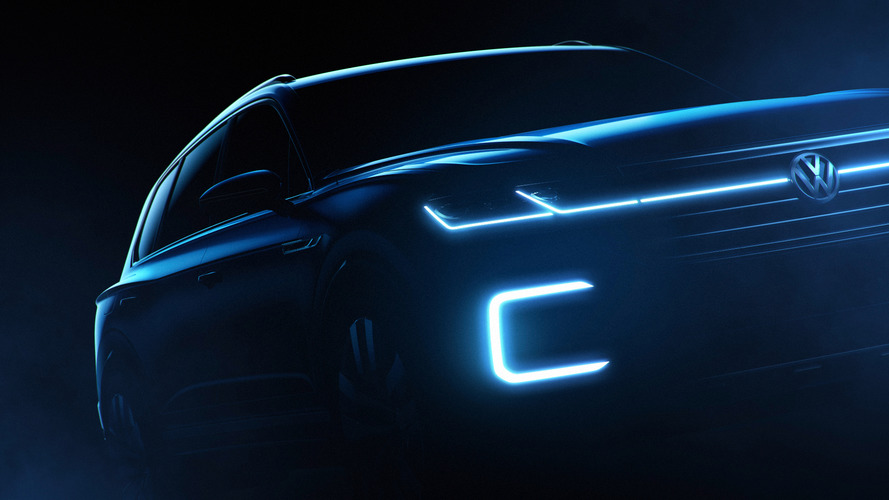 Volkswagen is getting ready to introduce a “high-tech” SUV concept at the upcoming Beijing Motor Show.

Although billed as a concept, based on what we are seeing in the attached teasers it seems the SUV is not that far off from being turned into a production model. Volkswagen doesn’t say at this point that it will happen, but the concept could indeed preview a large SUV.

These shadowy teasers show a muscular body with a prominent character line, plastic body cladding on the wheel arches, along with a beefy hood featuring dual vents to aid cooling of the engine. We also notice a long LED strip for the turn signals built into the conventional side mirrors, a sign that the concept could easily hit the assembly line with very few changes. We are not entirely sure, but those taillights appear to employ organic light-emitting diodes (OLEDs) which will soon be seen on another member of the VW Group, the 2016 Audi TT RS.

You can tell just by looking at those C-shaped LED lights that it is either a plug-in hybrid or a full electric VW. In this case we are dealing with a plug-in hybrid setup of yet unknown specifications that can deliver a combined output of 376 horsepower (280 kilowatts) and 516 pound-feet (699 newton meters) of torque. In hybrid mode it can return a predicted 78 miles per gallon in the combined New European Driving Cycle, while on electric power the battery juice will last for up to 31 miles (50 kilometers).

With the power of the combustion engine and electric motor(s) combined, the VW plug-in hybrid SUV concept will accelerate from 0 to 62 mph (100 kph) in a more than decent six seconds and reach a top speed of 139 mph (223 kph).

Photos of the interior are not available at this point, but VW says the concept has an Active Info Display merged with the infotainment system. What this means is that it comes with a fully digital and customizable instrument cluster in the same vein as Audi’s 12.3-inch Virtual Cockpit. The upcoming Golf facelift has already been confirmed to get the Active Info Display, so it’s no surprise that a posh SUV like this concept will take advantage of the technology that will eventually trickle down to other VWs.

VW mentions the cabin adopts a lounge-style configuration centered on passengers and with a focus on digitized operation. This could mean the concept boasts some form of autonomous driving technology, especially since the vehicle is described as being “one of the most advanced luxury SUVs in the world.”

From what we’re seeing so far, it’s shaping up to be a very promising concept that hopefully will morph into a production version (perhaps the new Touareg?). We’ll know what’s what on April 25 when the Beijing Motor Show will open its doors for the press.