An all-wheel-drive Chevy truck with 4,000 pound-feet of torque never sounded so quiet.

Classic square body Chevrolet pickup trucks are beyond hot right now. Venture to pretty much any car show in the US and you'll likely find an old '70s or '80 Chebby truck either slammed or lifted, packing some kind of V8 engine under the hood. This 1985 C10 is ready to rock the square body world by taking a very different route to car show glory. Actually, it won't rock the world – it will shock it. Purists, consider yourselves warned.

As you've no doubt guessed, this highly modified SEMA show truck doesn't have a V8. For that matter, it doesn't have any internal combustion engine. The crew at Salvage to Savage managed to dig up a pair of electric motors from a Tesla Model S, and with LS V8 swaps being supremely common these days, the decision was made to electrify this sucker. Of course, it's not nearly as simple as that.

The video at the top of the article chronicles the effort to finish the truck ahead of the 2021 SEMA Show, and the Salvage to Savage Instagram page confirms they made it. However, the truck isn't quite ready to execute viciously silent all-wheel-drive donuts. Some mechanical issues from the used driveline presented last-minute cooling issues for the battery, but it is functional for the show and it definitely looks wild. The widebody conversion is obviously completely custom, as is the interior that even includes a larger Tesla-style touchscreen for accessing and monitoring various systems. 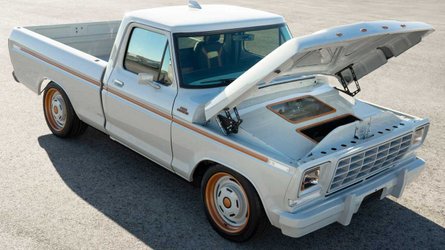 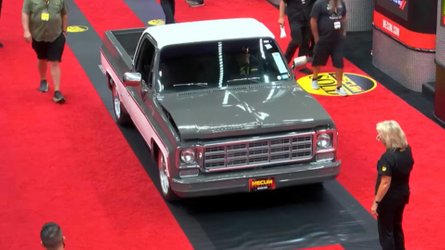 Once everything is dialed in, this truck should have 800 horsepower (596 kilowatts) per axle, with upwards of 4,000 pound-feet (5,423 Newton-meters) of torque. The truck is also set up to run each motor independently, meaning it will do forward donuts, reverse donuts, all-wheel donuts, and when the steering wheel isn't cranked, it should reach ludicrous speeds in just a few seconds. For drifting fun, a handbrake is installed that actually works electrically, stopping the rear wheels for sideways action. In theory, anyway.

We say that because the Salvage to Savage team promises to kill some tires after SEMA, once the replacement cooling pumps show up. Based on what we've seen thus far, we have no doubt this electric classic will exhibit some positively insane levels of performance. Will it be enough to impress the V8 crowd? Only time will tell.