GT and GT-Line models get a standard 10.25-inch touchscreen.

Kia gave the K3 a mid-cycle update for the South Korean market back in April but it's only now the compact sedan is receiving the same updates for North America. Rather than switching to an alphanumeric moniker as it's been the case with the Optima (now called the K5), the Honda Civic competitor is sticking to its Forte nameplate for the 2022 model year.

The exterior changes are quite substantial as aside from the updated logo and redesigned headlights, the Forte also gets a fresh take on Kia's corporate "tiger nose" grille. In the case of the GT model, there's a sportier front bumper with nifty three-point LED fog lights arranged diagonally.

The GT-Line also gets the redesigned fog lights, with both upper-spec models also featuring different LED taillights to separate them from the lesser trim levels. Rounding off the exterior tweaks are 16- and 17-inch wheels (LXS, GT-Line) and a trunk lid spoiler. Speaking of trims, the EX model has been discontinued, meaning the range has been simplified to include only four versions: FE, LXS, GT-Line, and GT.

For 2022, the driver's display has been bumped in size from 3.5 to 4.2 inches standard across the range, while the 8-inch touchscreen can be bumped to a new 10.25-inch infotainment. Kia is adding wireless Android Auto and Apple CarPlay integration, along with an available electric parking brake (with auto hold), and a USB charger for rear-seat passengers.

Upgrade to the GT-Line or GT and you get remote start, and there's now also the option for synthetic leather upholstery. A total of 15 safety and assistance systems can be ordered, some new and some upgraded from the pre-facelift Forte. From blind spot and lane following assist to navigation-based cruise control and safe exit warning, it’s impressively equipped for a model in this segment.

Rekindle With Its South Korean Sibling: 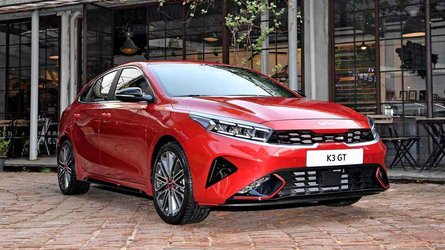 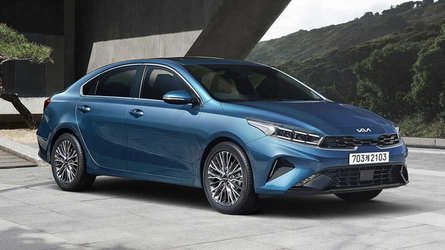 2022 Kia Forte Previewed In South Korea As The Updated K3

The two gasoline engines are carried over, meaning the regular models get a naturally aspirated 2.0-liter unit with 147 horsepower and 132 pound-feet (179 Newton-meters) of torque. Stepping up to the GT gets you a turbocharged 1.6-liter rated at 201 hp and 195 lb-ft (265 Nm) channeled to the front wheels through a seven-speed, dual-clutch automatic. The Forte GT also gets a sportier exhaust, and more importantly, a multi-link rear suspension for better handling.

While the Forte5 was also updated in South Korea where it goes by the name of K3 GT, there’s no word about the hatchback returning to the United States.