The future owner won't be able to drive it for more than 2,500 miles a year.

Hennessey has graduated from being the Texas tuner with a fixation on horsepower to a company able to develop its very own supercar. Looking at the technical specifications, some would even argue the Venom F5 is a hypercar, one that aims to shatter the record for the fastest street-legal production car. The $2.1-million machine will be limited to 24 examples, and of them is going to look exactly like this.

Finished in Blue Arione with orange accents that continue inside, this F5 was ordered by entrepreneur Howard Panes. Since the car will likely be registered in the United States, its future owner won't be able to drive it for more than 2,500 miles as Hennessey's first bespoke car lacks full federal homologation. It can only be registered with a show and display title because it does not have airbags.

Back in mid-December 2020 when the production version was unveiled, Hennessey already had about half of the production run pre-sold to early adopters. It's unclear how many units are still up for grabs and if the high-downforce derivative tentatively called F5 GTR is on the agenda as hinted earlier this year by John Hennessey.

With the proliferation of hybrids and EVs in the performance scene, the Venom F5 could be one of the last hurrahs for supercars and hypercars powered exclusively by an internal combustion engine. The specs are certainly meaty, with a twin-turbo 6.6-liter V8 engine dubbed "Fury" pushing out 1,817 horsepower and 1,193 pound-feet (1,617 Newton-meters) of torque. 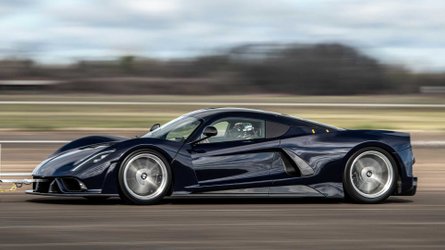 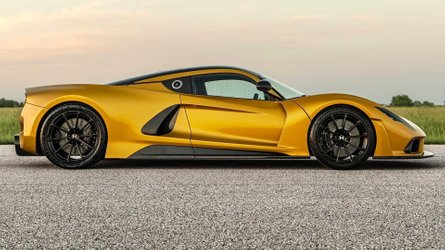 Speaking of controversy, the SSC Tuatara also wants to be an all-American speed king, but its attempts to set new records haven't exactly been smooth sailing. Meanwhile in Europe, we're positive Koenigsegg is cooking up something with the upcoming Jesko, specifically the Absolut version.