Everything coming to the market from that point forward would be an EV.

You'd better sit down for this one if you like the smell of gasoline coming from the benzene additive. Reuters is quoting German newspaper Süddeutsche Zeitung saying the end is nigh for new Audi models with the ol' internal combustion engine. According to the report, Audi CEO Markus Duesmann has told high-ranked officials and labor representatives the final car with a gasoline/diesel engine will be launched in 2026.

As if that wasn't shocking enough, 2026 is the cutoff date for a newly launched ICE altogether. From then on, every new model Audi is going to bring to the market will be fully electric as all types of hybrids will be phased out as well in approximately five years from now. It's important to point out the report specifically mentions no new model launches, so you'll still be able to buy an existing model with a gasoline (and maybe a diesel) engine for a number of years beyond 2026.

We're now beginning to wonder which model will go down in history as the last Audi to make a real engine noise rather than the artificial sounds pumped through the speakers we’ll have to get used to in the coming years. We can rule out the A4 and A6 lineups as the Ingolstadt-based marque has already announced the two will become EVs by around 2030, meaning the final combustion-engined versions will be out before 2026 since a four-year life cycle would be too short.

In addition, Audi recently hinted the A1 supermini is living on borrowed time by suggesting it won't be renewed since the VW Group has that segment well-covered with the Polo, Fabia, and Ibiza. Multiple reports have suggested the TT and R8 sports cars could morph into EVs, which if true, would likely happen in the coming years.

The Last Hurrah For The Five-Cylinder? 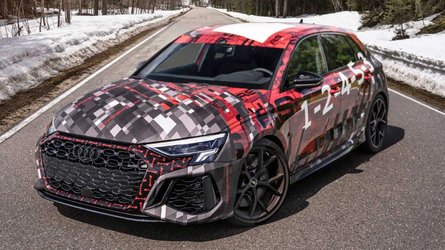 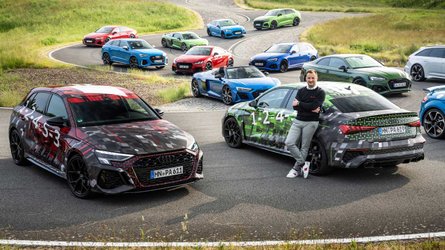 With VW confirming there will be a ninth-generation Golf, we can't help but wonder whether the very last Audi to have cylinders will be the mechanically related A3. The current model came out in 2020, so 2026 seems just about right for the next-gen car. Even if that's correct, logic tells us it will still be heavily electrified to meet increasingly stringent emissions regulations. Considering the typical life cycle of a product lasting 6-7 years, Audi could end the production of ICE cars altogether before 2035.

Until then, glorious engines such as the 2.5-liter inline-five and the naturally aspirated 5.2-liter V10 are still available for those who can afford cars like the RS3, TT RS, and the mighty R8. In addition, an ultra-luxe A8 Horch coming soon could be the swan song for the silky-smooth W12.