It's bigger and more sophisticated than the outgoing K7 / Cadenza.

As we originally reported in November 2020, Kia is promoting the K7 (Cadenza in North America) to the K8 badge to signal the large sedan’s push upmarket. Speaking of size, the “sleek and futuristic sports sedan” as described by the South Korean brand is bigger than before, now stretching at a generous 5,015 mm (197.4 inches).

The K8 is Kia’s first product reveal following the company’s recent rebranding that included an updated corporate logo. Say what you will about the design, but you have to admit it’s distinctive and represents a vast departure from the K7 / Cadenza, which wasn’t that old, having been launched less than five years ago.

The K8 has a lot going for it in terms of design, from the fastback-esque roofline to the frameless “tiger nose” front grille. The latter has an interesting diamond-like lattice pattern and just as special are the cutouts in the front bumper for similarly shaped LED daytime running lights. At the back, Kia’s new sedan is the latest car to embrace the full-width light bar, stretching over the fenders in a Y shape.

It’s less visible on this car because of the paint, but there’s a chrome trim piece that starts from the LED DRLs at the front and continues below the doors before ending in the lower corner of the taillights. Much like on the latest Kia Sorento SUV, the rear pillar hosts a metallic ornament, right above the fuel cap. 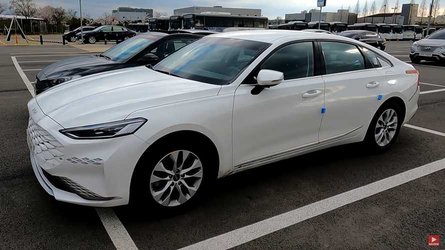 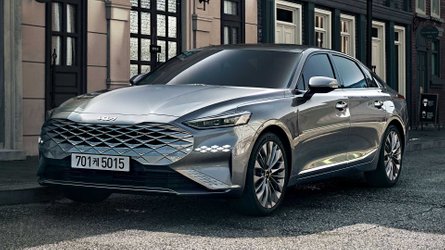 This is just a preview of the K8 as Kia will publish interior images and technical specifications at a later date. It’s scheduled to go on sale later this year when we should learn whether the new vehicle will come to the United States to replace the now-defunct Cadenza.

Kia’s decision to replace the K7 with a larger, more upscale product makes us wonder whether the K9 / K900 still has a future in the company’s lineup considering sales haven’t been great. There’s also the Genesis luxury brand to take into consideration, and we can’t help but wonder whether the Hyundai Motor Group is thinking about the risk of overlap between all these sedans. One way to separate the next K9 would be by turning it into an electric flagship for the Kia brand, but that remains to be seen.