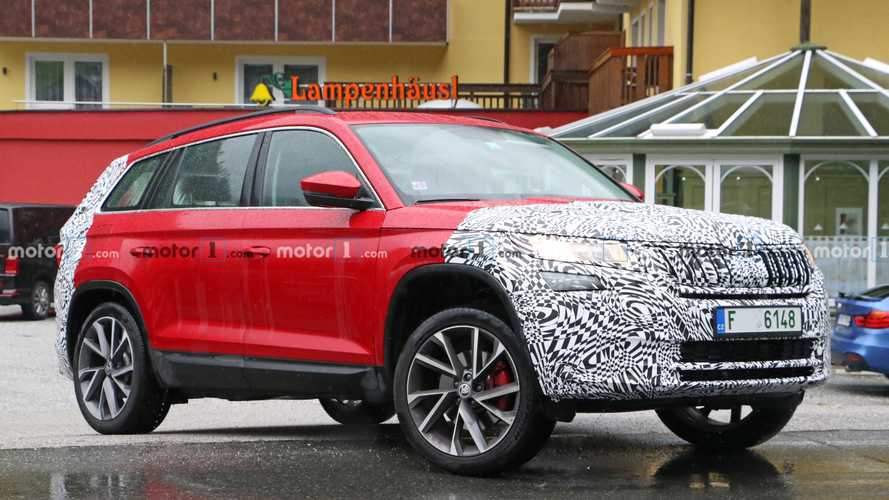 The world's fastest seven-seat SUV at the Nürburgring is preparing for a subtle mid-cycle update.

Just a couple of hours after publishing a set of spy shots with the Skoda Karoq facelift, its bigger brother is making the headlines courtesy of new spy shots. It’s not just any Kodiaq, but the high-performance RS version our spy photographers have caught for the very first time. The spicy Rally Sport appears in front of the camera at a vacation resort in Austria where the regular version of the midsize SUV was also seen undergoing testing (see spy shots attached at the bottom).

As it was the case with the Karoq, the Kodiaq RS has camouflage at the front and rear where Skoda will install slightly revised bumpers and updated lights. Never mind the halogen headlights of the prototype because the speedy SUV available today comes as standard with a full-LED setup. It should be a similar story with the facelifted version, but it would make sense for the matrix LED arrangement of the Superb facelift and fourth-gen Octavia to be offered.

Skoda Kodiaq Ambulance Has The Infotainment On The Passenger Side

The lesser-spec prototypes had similar camouflage to conceal what we believe will be minor tweaks to the bodywork. One of the test vehicles had a technical specifications sheet inside the cabin revealing the engine’s identity – a 2.0-liter turbodiesel with 200 horsepower (147 kilowatts). It’s the Volkswagen Group’s 2.0 TDI Evo unit that debuted recently on a Skoda with the unveiling of the Octavia Scout.

The cleaner and more efficient powertrain will also be offered for the diesel-fueled Octavia RS arriving later this year, having debuted on the VW Golf GTD at the end of February with 400 Newton-meters (295 pound-feet) on tap. The beefy diesel will come exclusively in a DSG affair.

The punchy diesel won’t be the only novelty brought by the Kodiaq’s facelift as we’re also expecting a plug-in hybrid system inherited from the Superb iV. It should combine a 1.4 TSI gasoline mill developing 156 hp (115 kW) with an electric motor rated good for 115 hp (85 kW). Combined output stands at 218 hp (160 kW) in Skoda’s flagship car, which in electrified form comes with a six-speed DSG and a 13-kWh battery pack by borrowing the same setup used by the VW Passat GTE.

The Skoda Kodiaq has been around for approximately four years, so look for the facelifted model to premiere later this year.