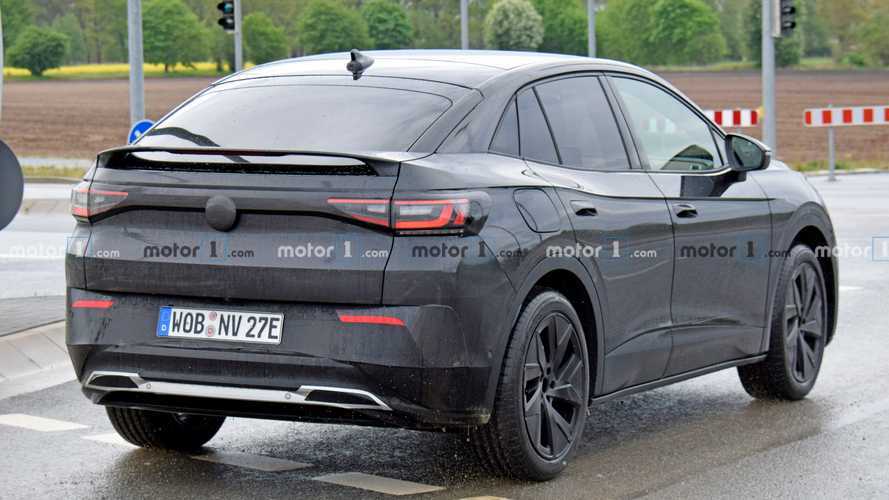 We see a few aggressive body changes on this very black prototype.

[UPDATE] 20 new spy shots have been added at the beginning of the gallery, below. The fresh imagery provides a much better look at the swoopy electric SUV.

The quick actions of a car enthusiast bring us what could be the first-ever sighting of the rumored high-performance Volkswagen ID.4 GTX. We reported late last year that VW was planning tweaked versions of its forthcoming line of electric ID models, using the GTX suffix to identify them. Now, we have photos from one of our spy sources showing what looks like an ID.4 crossover with some extra attitude.

Unfortunately, we only have a handful of photos shot with a phone, showing the rear of the prototype. Still, we can easily see the ID.4 resemblance in the profile. More importantly, we can see a few key differences that suggest this is an ID.4 GTX prototype.

The obvious standout is the rear spoiler positioned at the base of the glass. Look closely and you’ll see the roof and C-pillar are different as well – the ID.4 photos we’ve seen thus far have a chunkier roof whereas this test vehicle slopes down at the back. The C-pillar looks thinner, too, and of course, there’s the rear fascia with fake exhaust outlets. We suspect this is actually just camouflage wrap covering a design that differs from the standard model.

Show Us Your ID:

As for power, the gossip world is curiously quiet regarding GTX upgrades. We know the standard ID.4 will be offered with either a single-motor or dual-motor setup, giving the EV either rear- or all-wheel-drive. Given the performance nature of this model and the X in GTX likely denoting all-wheel-drive, it’s almost guaranteed the GTX will turn all four wheels.

Our colleagues at Inside EVs point out the similar ID Crozz concept had a total output of 302 horsepower (225 kilowatts), and that seems like a good place to start with this model. However, if VW hopes to compete with higher-performance variants of the Tesla Model Y or the forthcoming Mustang Mach-E, it will need to offer a bit more juice than that.

We don’t have a timeframe for when the ID.4 GTX could arrive. It’s believed VW will unveil the standard ID.4 by the end of 2020, so the performance model is likely still a year away at least.